Commentary: Production, loyalty, price all reasons to pick up Kyle Seager's option for one more year

Seager has a career-high 31 home runs and leads the team in HRs and RBIs.

Tonight, in the midst of the Mariners playoff chances hanging by a thread, I invite you to join me in the "Pick Up Kyle Seager’s Option For Next Season" club.

Because I believe he deserves it.

Earlier today, Seager hit his 31st home run of the season, which is a career high. And while his batting average this season hasn’t been close to his lifetime average, he not only leads the team in home run runs, but has 12 more RBI than anyone else.

This year, the Mariners paid Seager $18.5 million. They have an option to keep him next year for just $15 million. It kind of feels like a no-brainer.

Tell me that Seager isn’t worth the $15 million for one season, and I’ll say that the Mariners payroll this year was just under $82 million – the sixth-lowest payroll in all of baseball. They have money to spend. And it’s not like any of the Mariners prospects are banging down the door to play third base next season, so he’s not blocking anyone in Jerry Dipoto’s rebuilding plan.

But most of all, I feel like the M’s owe it to him. Seager has been close to a perfect citizen and representative of a mostly-losing organization for 11 years now. Given the team’s upward trajectory, doesn’t he deserve a chance to be part of a team that could break a more-than 20-year playoff-less streak next season? 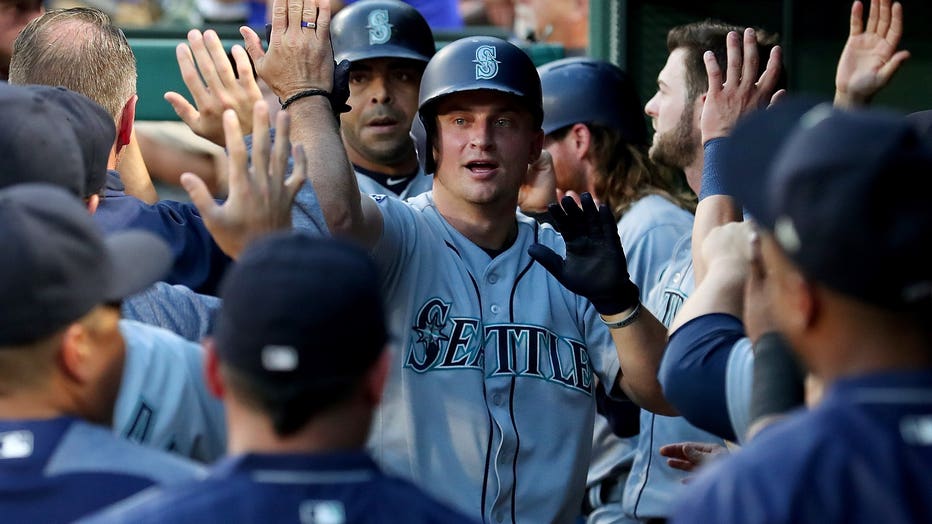 Kyle Seager #15 of the Seattle Mariners celebrates after hitting a two run home run against the Texas Rangers in the top of the second inning at Globe Life Park in Arlington on September 14, 2017 in Arlington, Texas. (Photo by Tom Pennington/Getty I

I understand that there might be philosophical differences between Seager and Dipoto. I wouldn’t be surprised if he was one of the stalwarts in the locker room who was furious when they traded Kendall Graveman last month. And I get that Seager’s probably on a personal mission to prove everyone wrong ever since Kevin Mather was caught on camera saying Seager was "probably overpaid" and it would likely be his last year with the team.

But that’s no reason to keep him from one more chance to reach the Promised Land with a team he’s given his life to for more than a decade.

It was one thing when Felix Hernandez was at the end of his deal with the Mariners paying him $27 million to go 1-8 with an ERA of 6.40. There was no reason – not even loyalty to The King – to keep him another year. But $15 million for one season to a guy who is still playing well? That shouldn’t be an issue.

So, Jerry, please. I know you’re thinking big picture, but I can’t come up with a good enough practical reason to not pick up Seager’s option. And if for any reason it’s an ego thing, I beg you to put it aside.

Because Kyle Seager is expected to be a Mariners Hall of Famer someday, and he deserves another go. Worst case, the M’s don’t make the playoffs next year, and it’s a ceremonial lap around the ballpark for one of the more dependable and consistent players in franchise history. Best case, we see him lead an up-and-coming clubhouse to heights they haven’t seen since 2001.

Please keep him for one more year. It might be a business, sure. But Seager’s production should be rewarded.

And more than anything, his loyalty should too.