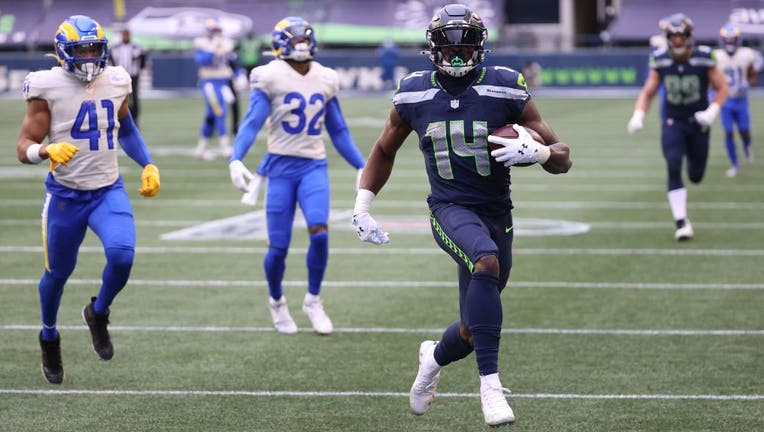 SEATTLE, WASHINGTON - JANUARY 09: Wide receiver DK Metcalf #14 of the Seattle Seahawks completes a reception over inside linebacker Kenny Young #41 of the Los Angeles Rams and carries for a touchdown during the second quarter of the NFC Wild Card Pla

Let’s start with a word that Pete Carroll used a number of times over the past few weeks: Crescendo. It referred to the entire team seeming to find its stride at the right time.

After all, big picture, the Seahawks were on a four-game winning streak and won the NFC West for the first time in four years.

I thought "crescendo" was even more appropriate given a closer look at the last few years. You could argue that the low point was after the Seahawks missed the playoffs in 2017, essentially purging their roster from distractions, and starting from scratch. There was a renewed energy we saw from Carroll, with brand new coordinators, and a younger gritty roster that won 10 games and reached the playoffs in 2018.

Year 2 of that "reset" – in 2019 - brought even more hope, winning 11 games and advancing to the divisional round. Which made many of us believe that the true "crescendo" would take place this season – and it had, until yesterday afternoon.

What we saw against the Rams was a massive gut punch to that entire theory.

It wasn’t that the Seahawks simply lost in the first round of the playoffs this year - it was the way they lost it. To now have a roster with legitimate championship potential, and to see so many of the same negative trends we’ve seen at times this season – but more importantly, consistently over the last six years of playoff games – is incredibly concerning.

The Seahawks have played in eight playoff games since Super Bowl 49. In the first half of those games, they have averaged just over six points. Just six. With arguably one of the best quarterbacks in the game.

It exemplifies a lack of urgency or efficiency right out of the gate.

Yes, all playoff teams are good. The Rams have one of the best defenses in the league. But Russell Wilson has now been sacked ten times in their last two postseason games. And yesterday, down by seven points in the second half, the Seahawks had three straight drives to tie the game – two of them with the best defensive player in football, Aaron Donald, not on the field – and they managed only 17 yards with just two first downs.

They converted just 14 percent of their third downs. They threw another head-shaking challenge flag. In a scene reminiscent of last season’s regular-season finale against the Niners, they were unable to get a play off on 4th and 1 – and that was after the team had more than two minutes following an injury time out. It’s fair to question preparation, game management, and the ability to adjust.

Speaking of which, someone asked former Seahawk Michael Robinson about their offensive system, to which he responded, "Don’t get me started! What happened with my Seahawks offense throughout the season is saddening. You have to be able to counter what defenses are doing to you. We never had a counter offensively."

Don’t get me wrong: This was another season filled with some fantastic moments. The Seahawks handled the challenges of playing during a pandemic better than anyone in the league. They should be credited for staying healthy, for winning more regular-season games than they had since 2014, going 7-1 during the regular season at home even without any fans there, and finally winning their division again.

But this year was supposed to be the ultimate crescendo. And falling short of last season, with a healthier roster and significantly better talent – and with some of the same issues that have foiled them over the last eight playoff games – needs to serve as a wake-up call for everyone involved.

Until then, the Seahawks will continue to be a better-than-average team that wins double-digit games, but may not reach its highest potential.

The picture says it best: If they don’t address these issues, they’ll be in a consistent state of limbo.