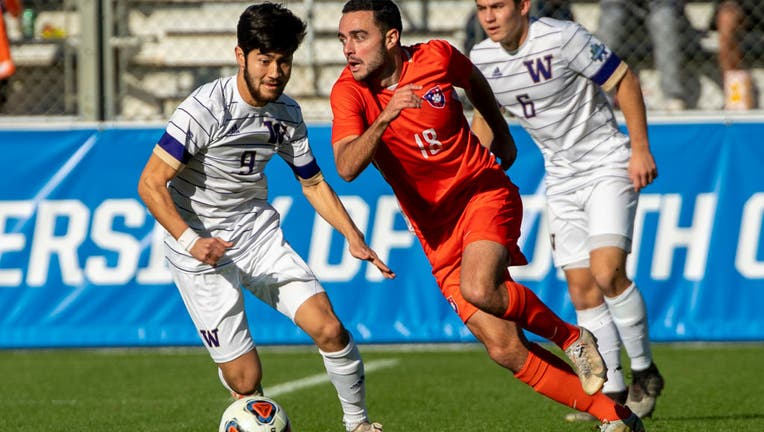 It was Clemson’s third national championship. The Tigers also won in 1984 and 1987.

"I think it’s going to take days and weeks to set in, but it’s unbelievable. It’s euphoric. I mean, it makes everything worth it. Everything was worth it before, but there’s no words," Clemson goalkeeper George Marks said.

Washington goalkeeper Sam Fowler was caught out of position and Reid easily scored his first just moments into the match.

Reid scored again on a header in the 15th minute. A junior, Reid finished the season with nine goals, including a pair of two-goal games. But he had scored just one goal in the last 14 matches.

"It was extremely special. Yeah, I hadn’t scored much in 14 games. But I didn’t let that deter me from trying to help out the team and try and score goals," Reid said. "My team supported me and it just feels really good to score two goals and help my team win the natty."

Second-seeded Washington struggled in the final third after the early Clemson goal put the Huskies on their heels. Marks had a pair of saves, including one in the final minutes as Washington scrambled to score.

"I don’t think for a second we doubted that we were out of the game," Washington defender Ryan Sailor said. "We always have belief in ourselves. We played right in the second half and things just didn’t go our way and sometimes that’s the way it is."

The eighth-seeded Tigers dogpiled in celebration at the final whistle and fans streamed on to the field in a flurry of confetti. One fan waved a giant Clemson flag.

Clemson was playing in its fifth national championship game. The last appearance came in 2015, when it fell to Stanford.

The Tigers advanced on a penalty shootout after a 1-1 draw with Notre Dame in the semifinals.

Washington coach Jamie Clark said it was an honor to play for a national championship, even if the team fell short.

"We got every minute out of the season we could," Clark said. "We all said we wanted to take every drop out of this season, and we got it."

Clemson was the defending ACC tournament champion but fell to Duke in the semifinals of this year’s conference tournament. But they had a solid tournament run, knocking off the No. 1, No. 2 and No. 4 and No. 9 seeds.

Washington finished a half-game back of Oregon State for the Pac-12 title. The Huskies had just one regular-season loss.

It was the second overall meeting between the two teams. The Huskies beat Clemson 4-1 in a neutral site game in 1996.

Announced attendance was 7,238, many of them Clemson fans who were able to drive under five hours to attend the title match.