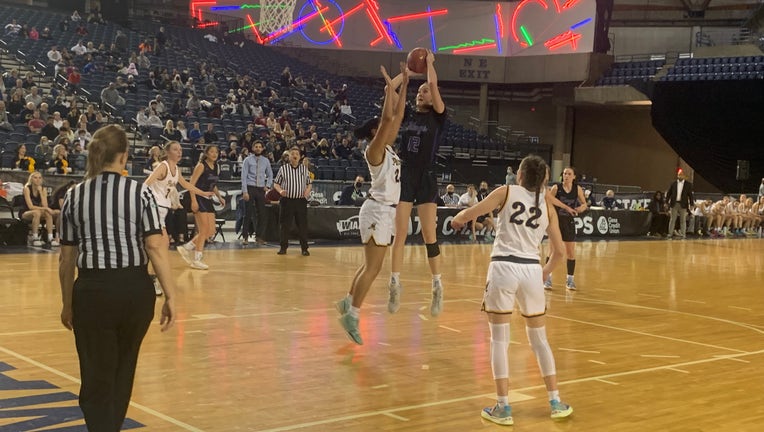 Teryn Gardner's layup try hit the underside of the rim as time expired as Lake Washington upset previously unbeaten Mead, 42-41, on Friday night to advance to the 3A girls championship game.

The Kangaroos had stunned top-seeded Mead, jumping out to a 27-11 halftime lead behind center Elise Hani, who led Lake Washington in scoring with 19 points and eight rebounds.

By the end of the third quarter, Mead had trimmed the advantage to 39-30 with Gardner sparking the rally effort. As the game entered the final minute, the lead was just 42-38 as the Panthers were within striking distance. Parker Brown converted a three-point play with 17.5 second remaining to cut the lead to just one.

A missed free throw by Lake Washington with 16.3 seconds left gave Mead a chance to steal the victory. After a timeout at half court with 13 seconds left, Mead managed to just Gardner open on a backdoor cut with time running down. Hani stepped in defensively on the baseline and altered Gardner's shot, which clanged off the bottom of the rim.

Rosa Smith was second in scoring for Lake Washington with eight points. Haley Burns had six points for Mead.

Mead will face the winner of No. 3 Arlington and No. 2 Garfield in the championship game on Saturday.

Garfield exploded for 23 points in the final quarter to overcome a six-point deficit and defeat Arlington 56-42 in the semifinals of the 3A girls state tournament on Friday night.

The Bulldogs trailed 39-32 at the end of three quarters. Arlington managed just one made field goal and one free throw in the final frame as Garfield's attack became unstoppable.

Samuels scored two straight field goals, then Sarah Lessig added two more, then Fiso added two more as the avalanche of points kept rolling for the Bulldogs. It took over five minutes for Arlington to score on a Hannah Rork free throw. They didn't make a shot from the field until just 41.5 seconds were left to play.

Garfield will face Lake Washington in the championship game on Saturday.