The new restrictions on restaurants, bars and other businesses will leave many people out of work as the holidays approach.

It's a troubling sign that another unprecedented wave of unemployment claims is coming to Washington.

The Washington Hospitality Association estimates 100,00 workers will lose their jobs as the holidays approach because restaurants and bars are now limited to outdoor dining and take-out. That number doesn't include workers at gyms, museums and other places that also have to close indoor service for the next four weeks.

After the chaos surrounding the first wave of unemployment claims, many people - some who waited months for benefits - are left wondering whether the system will be easier to navigate this time around. According to Suzi LeVine, the state's employment security commissioner, the answer is yes.

LeVine said ESD unemployment phone hours have been extended to 8 a.m. - 4 p.m., but she emphasized that the best way to navigate unemployment claims is through the ESD website.

The first thing for people to note is that it's much easier to restart a former unemployment claim than it is to submit a new one, LeVine said. This means if you lost your job early on in the pandemic and received benefits before going back to work, you'll already have an old claim to build on.

When you visit the ESD's unemployment page, scroll down to the bottom under Step 5 and look for the button that says "Login to restart." 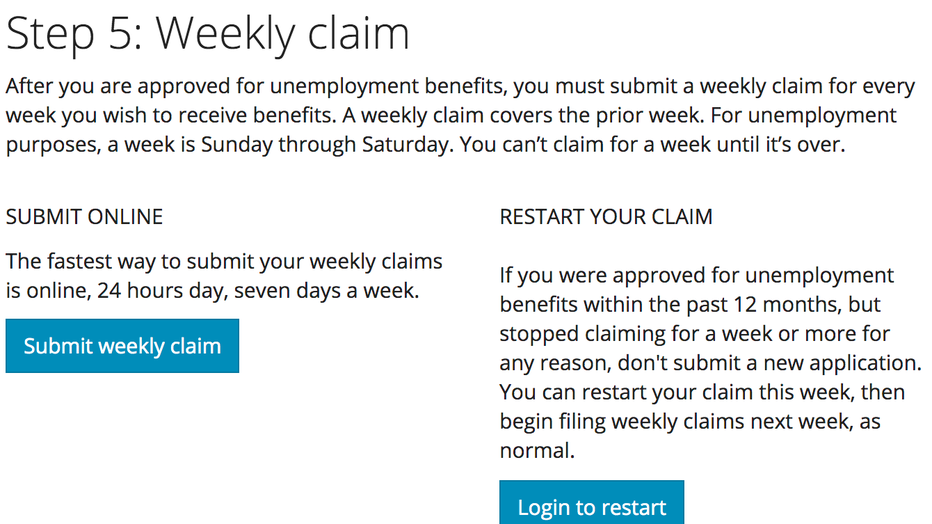 You'll also need to see if you're eligible for unemployment benefits before restarting or submitting a new claim. You can do that by going over this eligibility checklist:

For people who haven't applied before but need to do so now, you'll also need to make sure you have all required documents before you apply.

If you've tried everything on the website and still need help, Levine suggests that you call the claims line (800-318-6022) Thursday through Saturday when the lines aren't as busy.

As for the 26,000 people who received letters from ESD saying they were overpaid and have to repay benefits, LeVine explained that the reason those letters went out is complicated, but most people won't have to repay the money.

All you need to do is go online and file an appeal, which will pause any overpayments that need to be resolved, she said.

Some get notices about overpaid unemployment benefits in Washington

The state unemployment office has paid $1.2 billion in unemployment benefits to 1.4 million people in Washington since the start of the pandemic in March.

As of Tuesday (Nov. 17), 291,000 people in Washington receive weekly unemployment benefits of some kind, though that number is expected to rise in coming weeks.

"There’s nothing normal about this pandemic. There’s no playbook," LeVine said. "However we have learned and grown so much since March. We’ve changed and improved a lot of things ... It should be a lot smoother this time."