SEATTLE -- Salmon are a big part of life in the Pacific Northwest.

But over the past couple of decades, they’ve declined to critical levels and researchers don’t know why.

Solving the mystery is what nonprofit Long Live the Kings is working on, and thanks to a grant from Microsoft, technology is helping the nonprofit develop a comprehensive model to find clues to solve it.

Long Live the Kings is looking into Puget Sound and the waterways the flow into it, more broadly known as the Salish Sea. 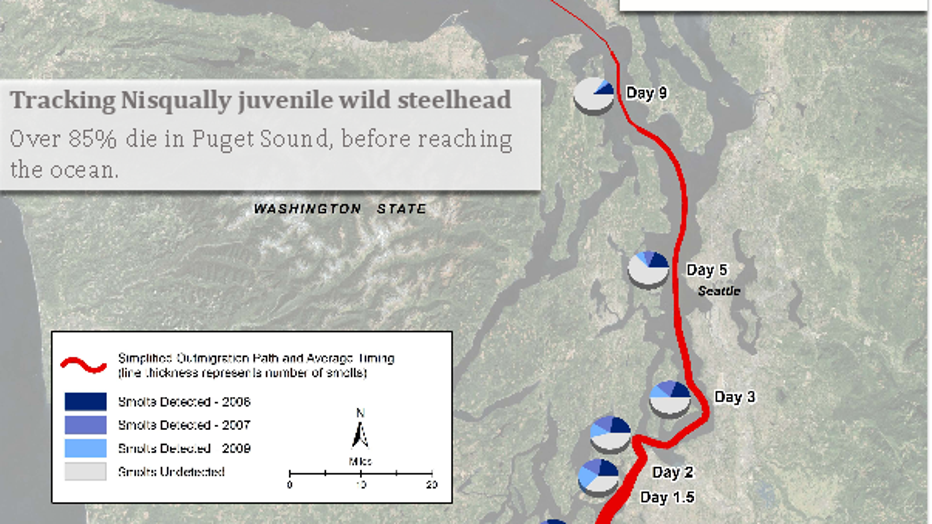 From Long Live the Kings.

Researchers say if we don’t find solutions, future generations may grow up without salmon that is critical for our Northwest economy and culture.

The roots of our Northwest identity run deep, from the green of our forests to the blues of our water.  The tribal heritage of our region shows us salmon have always been the lifeline throughout history, sustaining our economy and connecting us culturally.

“Salmon really represent life in the Pacific Northwest," said Michael Schmidt, deputy director with Long Live the Kings. "They come from the mountains they go all the way to the ocean and they come back."

The journey the salmon take has revealed a mystery. Something in their path has caused their decline; up to 10-fold over the past three decades. Schmidt says salmon thrived in the 1980s but since then, Coho, Steelhead and Chinook populations are decreasing sharply.

"We're very concerned that this icon will go away,” said Schmidt.

Schmidt, his team, and more than 200 experts are involved in more than 80 studies focusing on solving the mystery of why salmon are dying as they migrate through out waters.

All of those factors are being put into a high-tech database that’ll build an ecosystem model of Puget Sound over the next year. Like solving a mystery, Schmidt and his team will plug in clues they find in the field and this database will help reveal a map that’ll lead them to solve the mystery.

Schmidt says the stomach of salmon are one of the places where clues lie. 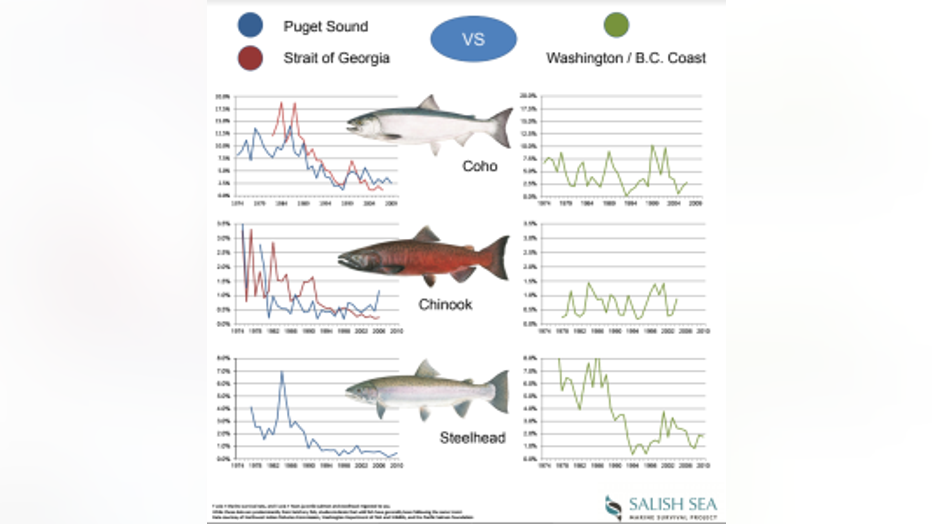 From Long Live the Kings

Researchers say seals are eating a lot of salmon, and that may be caused by the infrastructure built by people on our waters that have been bringing seals to the direct path of salmon migration.

"For example, the Ballard Locks or the Hood Canal Bridge or other infrastructure that may allow seals to haul out where they otherwise wouldn’t be,” said Schmidt.

The food web is where some of the clues hide, but like any mystery there are twists and turns along the way that must be weighed.

"What are the conservation trade-offs or the fisheries trade-offs,” said Hem Nalini Morzaria-Luna, an ecosystem modeler with Long Live the Kings.

Long Live the Kings say preserving salmon is in our hands, and as complex as the mystery may be, they are determined to find the clues that lead to solutions, so children can link salmon not to the past of Northwest history, but as the dominant species for generations to come.

Long Live the Kings will be doing a classroom component to their research this spring. It’ll be a STEM learning opportunity for students to understand our ecosystem and why salmon are so critical to life in the Northwest.

Orcas rely on salmon too, and if salmon go away, so does a food source for orcas.

Q13 News is working with Long Live the Kings throughout the winter and spring to follow the story of what's impacting our local salmon population.