President Joe Biden announced the U.S. is banning Russian oil imports, saying Americans will not be part of subsidizing Putin's war with Ukraine. Biden, who noted many allies may not be in a position to join the U.S. in the ban, said this is part of an ongoing effort to cripple Russia's economy.

As Russia has intensified its war on Ukraine, killing civilians and triggering a mass refugee crisis, President Joe Biden has announced plans to ban the importing of Russian fuel. Critics of Russia have said this would be the best — perhaps only — way to force Moscow to pull back.

A full embargo would be most effective if it included European allies, which are also desperate to stop the violence in Ukraine and the danger Moscow poses to the continent. Yet it's far from clear that Europe would take part in an embargo.

Unlike the United States, Europe is deeply reliant on energy it imports from Russia. While the U.S. could replace the relatively small amount of fuel it receives from Moscow, Europe could not, at least not anytime soon.

What's more, any curbs on Russian oil exports would send already skyrocketing oil and gasoline prices ever higher on both continents and further squeeze consumers, businesses, financial markets and the global economy. 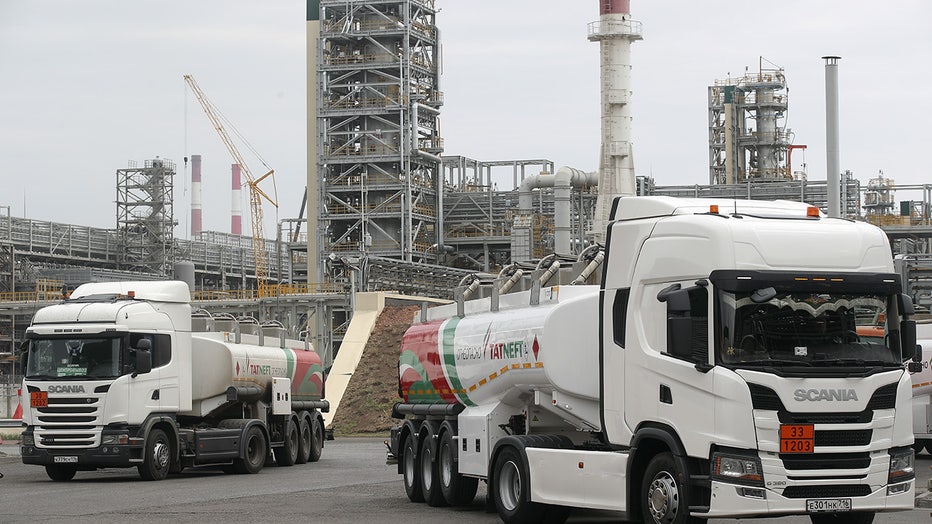 Here is a deeper look:

What will happen with a U.S. ban on Russian oil?

Amid rising gasoline prices in the U.S. — the average price has topped $4 a gallon for the first time since 2008 — the Biden administration has faced growing pressure to impose further sanctions on Russia, including a ban on oil imports.

For now, a broad U.S.-European ban appears elusive. On Monday, German Chancellor Olaf Scholz made clear that his country, Europe's single-largest consumer of Russian energy, has no plans to join in any ban. In response, U.S. Deputy Secretary of State Wendy Sherman hinted that the U.S. could act alone or with a smaller group of allies.

"Not every country has done exactly the same thing," Sherman said, "but we have all reached a threshold that is necessary to impose the severe costs that we have all agreed to."

Even with a ban on Russian oil, the Biden administration and Congress "remain laser-focused on bringing down the higher energy costs for American families and our partners stemming from Putin’s invasion," House Speaker Nancy Pelosi said.

Pelosi, who has expressed support for a U.S. ban on Russian oil, nevertheless also cited Biden’s action in leading U.S. allies to release 60 million barrels of oil from strategic reserves, including 30 million barrels from U.S. reserves, to try to stabilize global markets.

Would a U.S-only ban on Russian oil hurt Moscow?

The impact on Russia would likely be minimal. The United States imports a small share of Russia's oil exports and doesn't buy any of its natural gas.

Because the amount of oil the U.S. imports from Russia is modest, Russia could potentially sell that oil elsewhere, perhaps in China or India. Still, it would probably have to sell it at a steep discount, because fewer and fewer buyers are accepting Russian oil.

If Russia were eventually shut off from the global market, rogue countries such as Iran and Venezuela might be "welcomed back" as sources of oil, said Claudio Galimberti, senior vice president of analysis at Rystad Energy. Such additional sources could, in turn, potentially stabilize prices.

A team of Biden administration officials were in Venezuela over the weekend to discuss energy and other issues, White House press secretary Jen Psaki said. Officials discussed "a range of issues, including certainly energy security,'' Psaki said.

"By eliminating some of the demand, we're forcing the price of Russian oil down, and that does reduce revenue to Russia," said Kevin Book, managing director at Clearview Energy Partners. "In theory, it is a way of reducing how much Russia earns on every barrel it sells, maybe not by a lot, but by some. The most important question is whether there’s going to be more pressure on the other side of the Atlantic."

Pain at the pump: Gas prices & U.S. relationship with Russia

Prices at the pump have continued to climb nationwide despite efforts by several governments to quell the rise in oil. LiveNOW talks with Andrew Lipow, President of Lipow Oil Associates about the high prices and the United States relationship with Russia.

How could a Russian oil ban affect prices?

The news of the looming U.S. oil ban sent gasoline prices to their highest level ever recorded, with a gallon of regular selling for an average of $4.17 Tuesday.

A month ago, oil was selling for about $90 a barrel. Now, prices are surging around $130 a barrel as buyers shun Russian crude. Refiners had already feared being left with oil they couldn't resell if sanctions were imposed.

Shell said Tuesday that it would stop buying Russian oil and natural gas and shut down its service stations, aviation fuels and other operations there, days after Ukraine’s foreign minister criticized the energy giant for continuing to buy Russian oil.

Energy analysts warn that prices could go as high to $160 or even $200 a barrel if buyers continue shunning Russian crude. That trend could send U.S. gasoline prices past $5 a gallon, a scenario that Biden and other political figures are desperate to avoid.

The U.S. oil industry has said it shares the goal of reducing reliance on foreign energy sources and is committed to working with the Biden administration and Congress. Even without sanctions, some U.S. refiners have severed contracts with Russian companies. Imports of Russian crude oil and products have tumbled.

Preliminary data from the U.S. Energy Department shows imports of Russian crude dropped to zero in the last week in February.

The petroleum institute hasn't taken a formal stance on legislation to ban Russian oil imports. But it says it would comply with any restrictions imposed.

Will Europe go along?

A ban on Russian oil and natural gas would be painful for Europe. Russia provides about 40% of Europe’s natural gas for home heating, electricity and industry uses and about a quarter of Europe's oil. European officials are looking for ways to reduce their dependence, but it's going to take time.

"We have maneuvered ourselves into an ever-greater dependency on fossil energy imports from Russia in the last 20 years," Habeck said. "That is not a good state of affairs."

Russian Deputy Prime Minister Alexander Novak underlined that urgency, saying Russia would have "every right" to halt natural gas shipments to Europe through the Nord Stream 1 pipeline in retaliation for Germany halting the parallel Nord Stream 2 pipeline, which was not yet operating. He added that "we have not taken this decision" and that "no one would benefit from this." It was a change from earlier Russian assurances that they had no intention of cutting off gas to Europe.

Oil is easier to replace than natural gas. Other countries could increase production of oil and ship it to Europe. But much oil would have to be replaced, and this would drive up prices even more because the oil would likely have to travel farther.

In January, two-thirds of American LNG exports went to Europe. Some ships filled with LNG had been heading to Asia but turned around to go to Europe because buyers there offered to pay higher prices, according to S&P Global Platts.

While U.S. oil and gas producers could drill for more natural gas, its export facilities are already operating at capacity. Expanding those facilities would take years and billions of dollars.