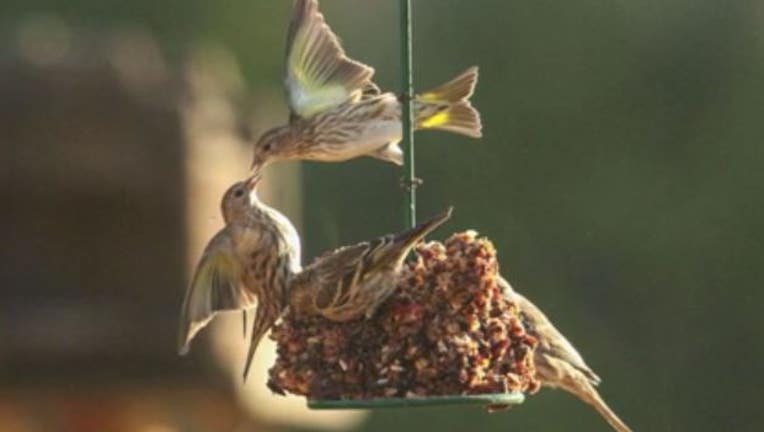 SPOKANE, Wash. - The Washington Department of Fish and Wildlife is urging residents to leave their bird feeders down through the end of the month to stop an outbreak of salmonella among birds.

Since early January, there have been multiple reports of dead and sick birds at backyard feeders throughout the state. Many of the reports came from King, Snohomish, Thurston, Kitsap and Skagit Counties. These reports prompted WDFW to recommend that residents temporarily discontinue feeding wild birds.

"The current die-off of finches- such as pine siskins- as well as other songbirds, is attributed to salmonellosis, a common and usually fatal bird disease caused by the salmonella bacteria," WDFW veterinarian Kristin Mansfield said in a news release. "When birds flock together in large numbers at feeders, they can transmit the disease through droppings and saliva."

The spread of the disease this winter could be exacerbated by what appears to be an "irruption" of winter-roaming finches- an anomaly where finches and other species that generally winter in the boreal forest in Canada and the far north move south and are spotted in areas in larger numbers than non-irruption years, according to WDFW.

The WDFW said those who choose not to discontinue wild bird feeding are encouraged to clean feeders daily by first rinsing the feeder well with warm soapy water, then dunking in a solution of nine parts water and one part bleach. Finish by rinsing and drying before refilling. Keep the ground below the feeder clean by raking or shoveling up feces and seed casings.

WDFW also urges people to reduce the number of feeders they offer to a quantity they will be able to maintain with daily cleanings, use feeders that accommodate fewer birds (such as tubes rather than platforms), and spread out feeder locations.

While uncommon, it is possible for salmonella to transfer from birds to humans from direct contact with infected birds.

You can report dead birds here.