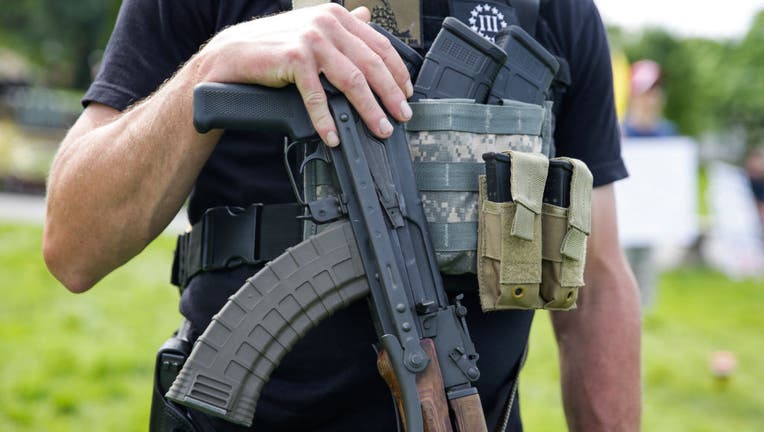 A man carries a firearm and ammunition magazines as people protest Governor Jay Inslee's stay-at-home order outside the State Capitol in Olympia, Washington on May 9, 2020. (Photo by Jason Redmond / AFP) (Photo by JASON REDMOND/AFP via Getty Images)

OLYMPIA, Wash. - Openly carrying guns and other weapons on the Capitol campus and at or near permitted public demonstrations across Washington would be prohibited under a measure approved by the state Senate Thursday.

The measure passed on a 28-20 vote and now heads to the House.

In addition to prohibiting openly carried weapons in the state Capitol or on the Capitol’s grounds, the bill would bar people from carrying weapons, either on their person or in their vehicle, while attending a permitted demonstration at a public place or while being within 250 feet of a permitted demonstration. An amendment accepted on the Senate floor exempts people who are openly carrying firearms on private property that they own or lease within that 250-foot buffer zone.

Democratic Sen. Patty Kuderer, the bill’s sponsor, said the mix of guns in a politically polarized environment "is a bad combination and it poses serious risk to public health and safety."

"What you need when you come to the Capitol is your voice," she said. "You don’t need a weapon."

The initial bill had the ban expand to within 1,000 feet of a demonstration, but Kuderer amended the bill before it passed out of the Senate Law and Justice Committee in order to reduce the buffer zone after pushback from opponents that the initial range was too large. Under the amended language, protests that don’t have a permit are not covered by the ban.

Violation of the law would be a gross misdemeanor, punishable by up to one year in jail and a fine of up to $5,000, or both. Kuderer said she modeled it on a similar law enacted in Alabama.

Republican Sen. Keith Waggoner said that the Bill of Rights "are not enumerated in order of importance."

"What this bill does is pit one right against another," he said.

While openly carried guns have been banned in both the public galleries of the Senate and House chambers and in public hearing rooms at the Capitol’s legislative office buildings since 2015, people can still openly carry weapons in the main public areas of the Washington Capitol and on the grounds of the Capitol campus.

Permitted concealed weapons have been banned from the Senate public gallery since 2018, but they are allowed in the House public gallery. The Capitol building has been closed to the public since last March because of the coronavirus pandemic. But the Capitol campus grounds are open and have drawn protests including people carrying weapons to oppose coronavirus restrictions, and then, after the election, the outcome.

Second Amendment rallies are common in Washington state. The number of protests including people carrying weapons has increased with protesters drawn to the Capitol to oppose coronavirus restrictions, and then, after the election, the outcome. In December, there was a shooting that injured one person during a clash between protesters in a parking lot near the Capitol’s two press houses. And in early January, supporters of former President Donald Trump, some of them armed, broke through a gate at Gov. Jay Inslee’s residence next to the Capitol.

Democratic Sen. Jesse Salomon noted that Inslee had to call up 750 members of the National Guard to protect the Capitol after threats by groups that they would occupy the building when the legislative session began Jan. 11. A fence still surrounds the building.

"These are not normal times," he said. "These are volatile times."

Republican Sen. Sharon Brown, who voted against the measure, said "the issue is not with guns, the real issue is with our inability to have civil discourse."

"We can take away guns. That doesn’t solve the problem," she said.

The proposed law in Washington would add permitted demonstrations and the Capitol grounds to the list of designated places where firearms are already prohibited statewide, including restricted areas of jails, courtrooms, taverns and commercial airports.