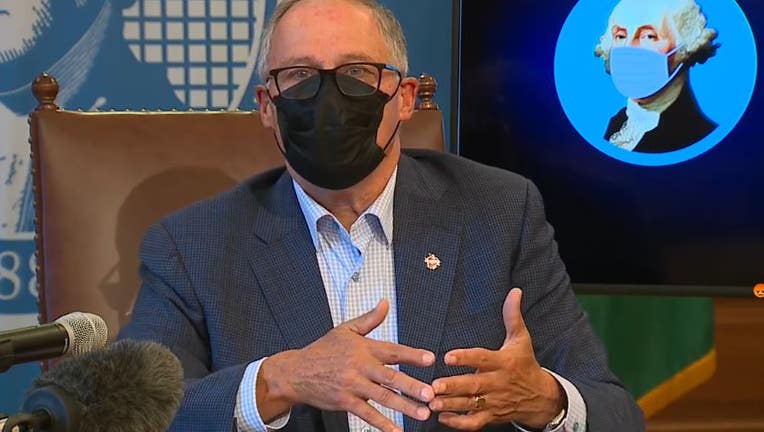 OLYMPIA, Wash. - Gov. Jay Inslee said Wednesday the state has ordered 5.5 million at-home tests to distribute to the public and will improve booster vaccine access and supply about 10 million free protective masks amid a steep increase in COVID-19 cases due to the more contagious omicron variant.

Inslee’s office said the state has already received 800,000 of the tests from manufacturers this week, and that another 4.7 million are expected to arrive next week. Those tests will be distributed in various ways, including through a web portal that is expected to become available in the coming weeks so that families can order tests directly to their homes at no cost.

Tests will also be sent directly to schools and local health departments to be distributed to underserved communities.

A spokesman for Inslee said the overall number of tests acquired or expected doesn’t include additional tests that have been promised by the federal government.

And it doesn’t include the purchase of an additional 400,000 test kits King County Executive Dow Constantine announced earlier Wednesday. That brings the total amount of tests purchased by King County — home to Seattle — to 700,000.

As of Tuesday, the state had more than 888,000 confirmed or probable cases since the start of the pandemic and 9,909 deaths. After months of in-person news conferences by the governor, Tuesday’s was held remotely due to concerns over omicron.

Nearly 78% of the population age 5 and older has received at least one dose of vaccine, and nearly 71% is fully vaccinated.

As of this week, more than 1.9 million people have either received a booster or a third dose, according to the Department of Health.

The state also is trying to bolster booster availability, and plans to add a mass vaccination site in northwest Washington the week of Jan. 18. The governor said that the capacity of a FEMA mobile vaccination clinic in King County has already tripled its output from 500 shots a day to 1,500.

Inslee also announced in the coming weeks the state will release about 10 million masks, including KN95 and surgical masks, from the state’s supply, to the community, including K-12 schools.