Man speaks out after his dog is killed in random attack

SEATTLE - A 67-year-old man whose beloved dog was killed in a random attack in Seattle's Pioneer Square neighborhood is speaking out about the experience exclusively to Q13 News.

Police say a man confronted John Hickey as he walked his dog Alice near Courthouse Park on Saturday. The suspect allegedly demanded Hickey's jacket but backed off when he was threatened with pepper spray by Hickey.

"I heard pounding of feet and I turned around and he was running full speed at us and I didn't have time to really do anything. I had her on the leash and he came running towards her, knocked me down and he kicked her so hard that she went up in the air and started hemorrhaging," Hickey explained.

Hickey said as soon as Alice hit the concrete, it was clear she didn’t have much time left. She died in his arms minutes later.

"She thought everybody liked her and she was just proud of that. And the most horrible thing, when she died she gave me a look ... just was like she was confused that anyone would do something like that to her," Hickey said. 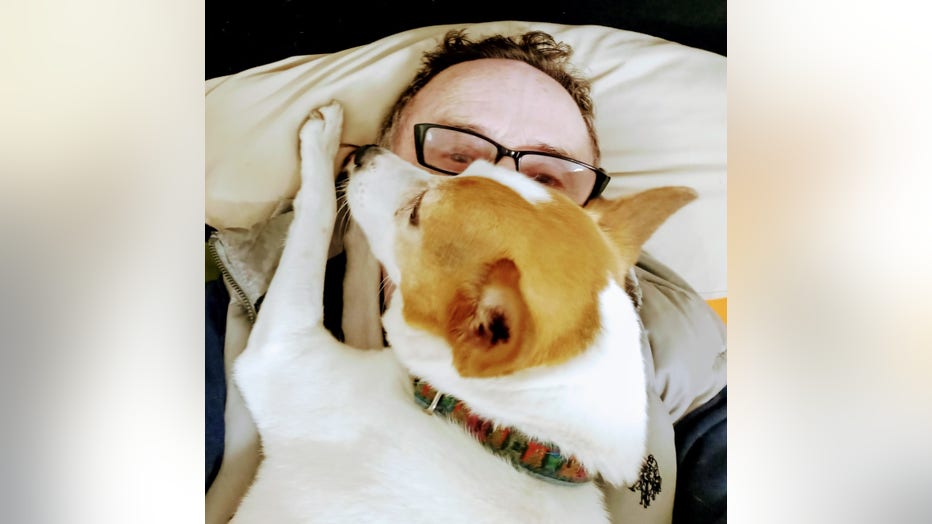 Hickey was also injured in the attack and is now in a wheelchair. The physical pain is nothing to him, compared to the loss of his constant companion of 14 years.

Hickey lives alone and said he’s not sure what his life will be like without Alice.

"She got me through days when I literally don't think I would've gotten up in the morning. Except I knew she needed me and she knew that I needed her."

RELATED: Judge releases man accused of killing dog in Seattle a day after his arrest

On Tuesday, a judge ultimately decided not to set bail and released the 29-year-old suspect.

The King County Prosecuting Attorney's Office asked Judge Marcus Naylor to hold him on $25,000 bail, but Judge Naylor released the man on his own recognizance a day after his arrest. He has not been formally charged.

Seattle Police objected to the man's release, saying his "escalating behavior will continue."

Hickey said he knows the area has gotten rough, but he never thought living here would cost him his best friend’s life.

"She would cuddle up and wrap her arms around my neck. She's all I had -- and I'm not complaining ... that was all I had. I mean, she was all I needed," he said.

"I am responding on behalf of the court as presiding judge, because a judge is ethically precluded from commenting on open or ongoing cases over which they presided.

When deciding whether to hold an accused person, all judges in Washington, including King County District Court judges, are bound by requirements set out in state law. Notably, in all cases involving crimes that are not subject to the death penalty, the presumption is that the suspect must be released upon their promise to appear at a future hearing. For a judge to impose more restrictive conditions, state law and Washington State Supreme Court rules require that there be demonstrable facts that meet very specific and limited reasons for holding a person (CrRLJ 3.2).

As a dog owner and as someone who comes in and out of the downtown Seattle courthouse on a regular basis, I understand the outrage many folks in our community feel with such incidents. However, as judges, when we put on our robe and walk into a courtroom, our decisions must be based only on the applicable law and the admissible information before us and must never be based on personal preference or opinion.

It is also important to remember that the judicial decision made in this case was whether to hold someone who is accused of a crime. A charging decision has not yet been made. The judge must make a decision based on the facts presented in a short narrative and based on the available information unique to the alleged circumstances of a particular case. There is often more information than is conveyed to the public. The suspect in this case had no known criminal history and no history of failing to appear for court. Probable cause was found for the non-felony charge of Animal Cruelty in the Second Degree – a gross misdemeanor. The judge did impose conditions pending the suspects return to court for the prosecutor’s charging decision scheduled for June 3, 2021.

I am confident that every judge in King County District Court strives to do their best to make fair and impartial decisions and to uphold the rule of law, even in difficult cases. The information available for a judge to make these decisions at any preliminary hearing is very limited and each judge does their best to make the best lawful decision possible for all concerned."

A gofundme has been set up by on John's behalf in hopes funds can help him move out of Pioneer Square.

Man accused of kicking a dog to death released from custody

At his first court appearance a day after his arrest, a judge released him on his own recognizance without bail.