Addressing the Senate Armed Services Committee, Austin, who served 41 years in the Army, vowed to surround himself with qualified civilians and include them in policy decisions.

WASHINGTON - On his last day in office, President Donald Trump issued commendations to a number people for their contributions to Operation Warp Speed, a White House effort to distribute 300 million doses of a viable COVID-19 vaccine by January 2021, which by Jan. 19 had not been met.

A few names on the list of commendations stood out, particularly Dr. Anthony Fauci and Dr. Deborah Birx, both of whom were key members of the White House coronavirus task force in its early days, before having their public-facing roles diminished when the task force ceased providing regular briefings.

Despite his sometimes public clashes with Fauci, the nation’s top infectious disease expert, Trump’s list included the longtime director of the National Institute of Allergy and Infectious Diseases. Apart from his work on the coronavirus task force, Fauci worked tirelessly to inform Americans of the science concerning the novel coronavirus, urging the public to choose facts over conspiracy theories and speculation.

Combating the spread of the virus was made more difficult by "a mistrust of science" and mixed messaging from political leaders that caused public measures to take on "an air of political ideology," Fauci said during a virtual appearance at the Washington University School of Medicine’s "Grand Rounds" forum on Jan. 7.

"That is so destructive to the trust that’s needed when you want to mobilize a country," Fauci said.

Birx, who stayed in Trump’s good graces a little longer than Fauci, supplied numbers of cases and projections which helped the U.S. keep track of where it stood on its handling of the pandemic for a time. But by late summer she was sidelined by Trump, showing up less and less during the coronavirus task force briefings while they were still taking place.

Birx announced her plans to retire in December, but stated she would gladly offer her assistance to the Biden administration.

The coronavirus would almost certainly have posed a grave crisis for any president given its rapid spread and power to kill, experts on public health and government said.

But Trump seemed to invest as much in battling public perceptions as he did in fighting the virus itself, repeatedly downplaying the threat and rejecting scientific expertise while fanning conflicts ignited by the outbreak. 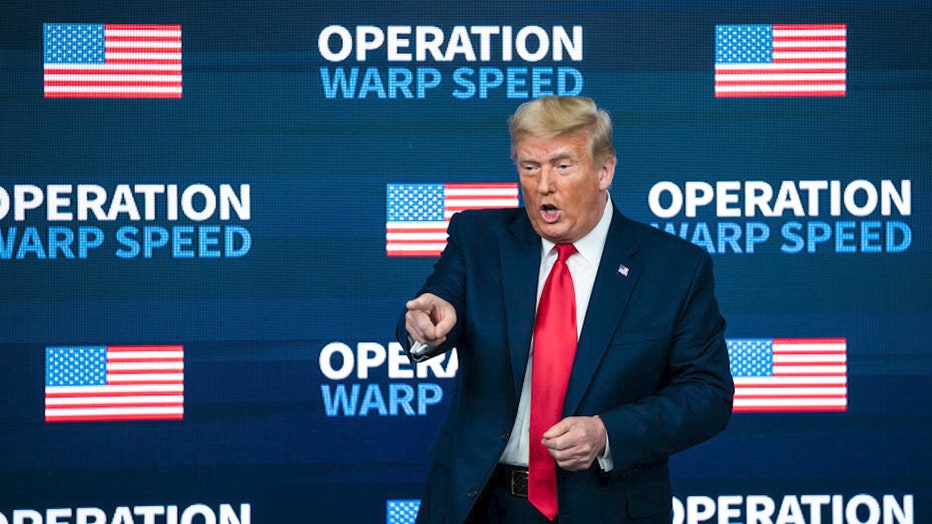 RELATED: US surpasses 400,000 COVID-19 deaths, more than any other country in the world

As president, he was singularly positioned to counsel Americans. Instead, he used his pulpit to spout theories — refuted by doctors — that taking unproven medicines or even injecting household disinfectant might save people from the virus.

The White House defended the administration this week.

"We grieve every single life lost to this pandemic, and thanks to the president’s leadership, Operation Warp Speed has led to the development of multiple safe and effective vaccines in record time, something many said would never happen," said White House spokesman Judd Deere.

With deaths spiraling in the New York City area last spring, Trump declared "war" on the virus. But he was slow to invoke the Defense Production Act to secure desperately needed medical equipment. Then he sought to avoid responsibility for shortfalls, saying that the federal government was "merely a backup" for governors and legislatures.

"I think it is the first time in history that a president has declared a war and we have experienced a true national crisis and then dumped responsibility for it on the states," said Drew Altman, president of the Kaiser Family Foundation, a health care policy think tank.

When the Centers for Disease Control and Prevention tried to issue guidelines for reopening in May, Trump administration officials held them up and watered them down. As the months passed, Trump claimed he was smarter than the scientists and belittled experts like Dr. Anthony Fauci, the government’s top authority on infectious diseases.

"Why would you bench the CDC, the greatest fighting force of infectious disease in the world? Why would you call Tony Fauci a disaster?" asked Dr. Howard Markel, a medical historian at the University of Michigan. "It just doesn’t make sense."

The distribution goal of 300 million doses by January 2021 set for Operation Warp Speed in March of 2020 has yet to be reached. The latest data collected by the Centers for Disease Control and Prevention revealed over 31 million doses of vaccine have been distributed and about 12.3 million people have received at least one dose.

The majority of those who have received the vaccine from either Moderna or Pfizer have not seen complications or side effects, with a few reporting allergic reactions.

Distribution operations for the vaccine hit a snag early on for some U.S. states as the rollout triggered confusion, and in many cases, rushes to secure a place in line through state systems that were not designed to bear the weight of a crush of appointment-seekers.

In Missouri, more than 172,000 people in St. Louis County registered for the vaccine, but the local health department so far has only received 975 doses, said County Executive Sam Page.

In California, the most populous state, counties are pleading for more vaccine as the state tries to reduce a high rate of infection that has led to record numbers of hospitalizations and deaths.

Although the state last week said anyone ages 65 and older can start receiving the vaccine, Los Angeles County and some others have said they don’t have enough to immunize so many people. They are concentrating on protecting health care workers and the most vulnerable elderly in care homes first.

Michigan's governor, meanwhile, submitted a request to purchase 100,000 doses of the vaccine directly from the manufacturers on Jan. 12 amid a statewide shortage.

Gov. Gretchen Whitmer asked the federal government if her state could purchase additional doses from Pfizer, which has a manufacturing facility in Michigan, according to FOX 2 Detroit. Whitmer’s request to purchase the extra doses directly is still pending.

After a request for help to the Department of Health and Human Services sent out by Whitmer and eight other governors, the federal government promised to release millions of doses that were stockpiled however, these reserved doses did not exist.

Oregon Gov. Kate Brown confirmed reporting from The Washington Post when she said the state wouldn’t be receiving increased shipments. She said she got the news directly from Gen. Gustave Perna, who leads the Operation Warp Speed accelerated vaccine program, according to FOX 10 Phoenix.

New York Gov. Andrew Cuomo, after taking heat for his state’s inadequate vaccine rollout, revealed on Monday that he also asked Pfizer if he could purchase more doses of their vaccines directly. Cuomo said New York would be the first to buy directly vaccine doses from a drugmaker. States have so far been receiving supply from the federal government.

"The problem was created by the federal negligence in the first place," the Democratic governor said at a press conference on Monday. "The federal government is in control of the supply. They must increase the supply. Approve Johnson & Johnson, expedite that. Buy more Pfizer. Buy more Moderna."

Meanwhile, the death toll from COVID-19 in the U.S. topped 400,000, a grim milestone which some health experts say will only increase, possibly reaching nearly 567,000 by May 1, according to researchers at the University of Washington.

The U.S. accounts for nearly 1 of every 5 virus deaths reported worldwide, far more than any other country despite its great wealth and medical resources.

With more than 4,000 deaths recorded on some recent days — the most since the pandemic began — the toll by week's end will probably surpass the number of Americans killed in World War II.

"We need to follow the science and the 400,000th death is shameful," said Cliff Daniels, chief strategy officer for Methodist Hospital of Southern California, near Los Angeles. With its morgue full, the hospital has parked a refrigerated truck outside to hold the bodies of COVID-19 victims until funeral homes can retrieve them.

"It’s so incredibly, unimaginably sad that so many people have died that could have been avoided," he said.