Thousands of protestors and abortion rights supporters gathered across the Puget Sound region on Saturday, as part of a nationwide day of action to rally and march for women's rights, specifically, abortion rights.

After a leaked draft opinion suggested the U.S. Supreme Court is considering to overturn the landmark Roe v. Wade ruling, activists around the country spoke of the need to mobilize quickly to defend the right to keep abortion legal. Tens of thousands participated in events around the country, where chants of "Bans off our bodies!" and "My body, my choice!" rang out. Cities around the Puget Sound region also banded together to ensure their voices are heard.

"It is clear that the current majority of the Supreme Court is putting their extreme ideological agenda above the rights of all Americans by overturning what several of the current justices said was ‘settled law’ under oath in their confirmation hearings," a statement from the organization read in Wednesday's press release. "This outcome is as dangerous as it is unprecedented, and will open the floodgates for the Supreme Court to reverse other fundamental civil rights decisions. We believe that family planning and reproductive health decisions should be left to individuals" 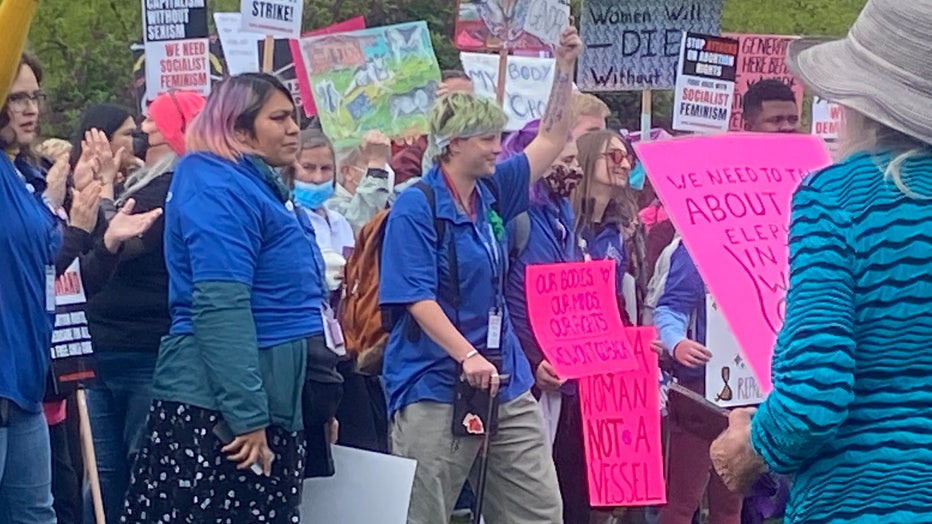 Organizers had expected around 4,000 people to attend, but the number exceeded those expectations. The massive crowd stood in solidarity with other groups nationwide, calling to protect a person's right to access to abortion.

"Today people are coming out all across the country and right here in Seattle," said Courtney Normand, Washington State Director of Planned Parenthood Alliance Advocates. "People are really outraged to hear what the Supreme Court is poised to do this year. They are going to very likely overturn our constitutional right to an abortion in this country.The result of that is 36 million American women and people that can become pregnant losing access to this most basic fundamental healthcare."

Abortion rights supporters gathered for a "Bans Off Our Bodies" day of action in support of abortion access and reproductive freedom on Saturday.

The event was organized by Women’s March, UltraViolet, Planned Parenthood, and MoveOn, in partnership with SEIU, ACLU, NARAL and Liberate Abortion.

RELATED: 'Bans off our Bodies': Abortion rights supporters rally across the U.S.

Women's rights and abortion rights supporters gathered for a "Bans Off Our Bodies" mega rally at the Snohomish County Courthouse Plaza and Amphitheater on Saturday.

According to the Everett groups' press release, 300 people were signed up to participate in the event, organized by Snohomish County Indivisible, as early as Wednesday.