SEATTLE - Hundreds were marching in demonstrations in Seattle and Portland on Tuesday, Election Day, and at least eight people were arrested in Seattle.

In Seattle, two groups marched through Seattle Tuesday evening and the Seattle Police Department tweeted that they had given public safety warnings to people to keep moving. One group carried American flags and ‘Black Lives Matter’ banners. 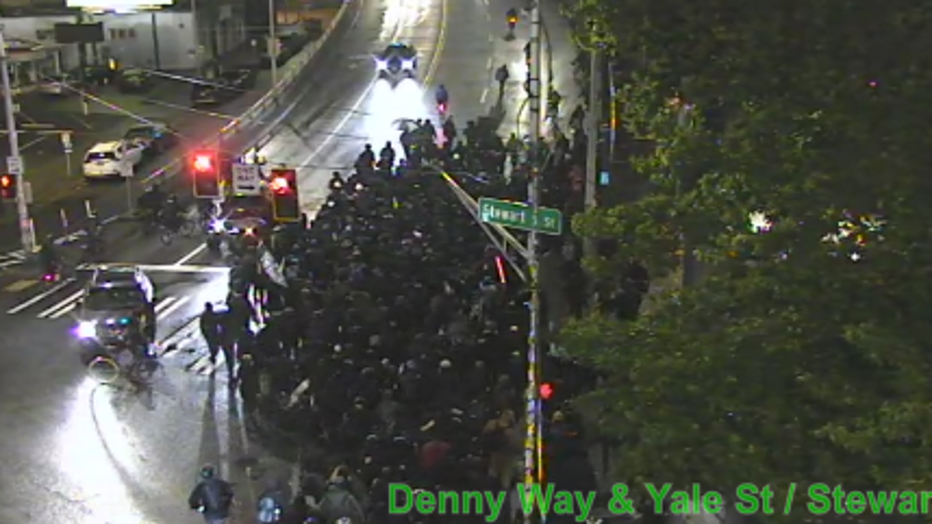 Just after 9 p.m. the two groups appeared to merge and police ordered people to stop putting items, including nails, in the roadway. Police said they had made several arrests including one involving someone who damaged a parking meter with a hammer.

Seattle Police said at least eight people had been arrested as of 10:20 p.m. Tuesday. The arrests were for pedestrian interference, obstruction, assault on an officer, reckless driving, and criminal mischief, police said.

Seattle Police said on Twitter that dispersal orders had been given around 10:00 p.m. in the Capitol Hill neighborhood.

The Office of Police Accountability in Seattle encouraged the Seattle Police Department “to allow demonstrators to freely exercise their First Amendment rights” and advised demonstrators to protest peacefully.

Seattle Mayor Jenny Durkan said Tuesday she knows people have questions about what could happen in Seattle on Election Day and in the following days.

“In one of the most challenging years in our city’s history, we have a president that has consistently incited hate, fear, and violence," Durkan said. "This is why my office has been closely coordinating with the Governor, County Executive, and City departments for a safe and secure Election Day and planning for the days that follow.”

Durkan said law enforcement agencies do not have any intelligence to indicate there are any specific threats.

Hundreds of people were marching through Portland, chanting among other things, “This is what democracy looks like.” Organizers said the demonstration would be peaceful, and that regardless of the presidential election result, they would continue demonstrating in support of racial justice.

The Multnomah County Sheriff's Office said on Twitter that some Portland protesters were openly carrying firearms.

Oregon Gov. Kate Brown had the National Guard on standby as Oregon's largest city has seen near nightly protests since the police killing of George Floyd in Minneapolis. President Donald Trump’s call for a crackdown on protests in Democratic-led cities has attracted right-wing groups to Portland for pro-Trump events.

“I want to be very, very clear that voter intimidation and political violence will not be tolerated," Brown said on Monday.