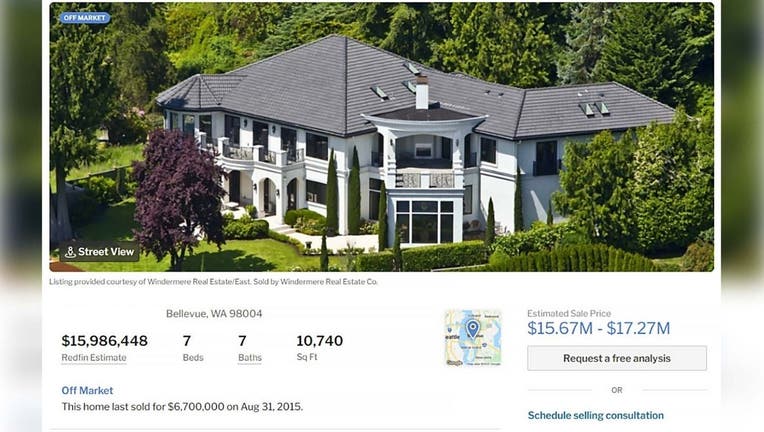 The listing for Russell Wilson's Bellevue mansion, still listed as "off market." (Redfin)

BELLEVUE, Wash. - Russell Wilson may soon be packing his bags for Denver to play for the Broncos, but that deal could get even sweeter—his Bellevue mansion more than doubled in value since he bought it in 2015.

The Seahawks for months have been quashing rumors they would trade their franchise quarterback. Last week, head coach Pete Carroll said they "have no intention of making any move there." By Tuesday, the team reportedly came to terms with a trade deal.

Now, Wilson may feel inclined to sell his home before moving to Colorado.

His Mediterranean-style waterfront estate sits on Lake Washington, and was worth a modest $6.7 million when Wilson bought it from former Microsoft manager Harish Naidu, the Puget Sound Business Journal wrote in 2015.

The home is 10,210 square feet on a 0.67-acre plot of land, with seven beds and seven baths. It is still listed as ‘off market,’ but if Wilson decides to sell it on his way out, he will get a massive return on his investment.

The Wilsons also own a house in San Diego with its own private football field, where Russell hosted offseason workouts with his Seahawks teammates.

A week after saying they had no intention of trading Russell Wilson, the Seattle Seahawks have dealt their star quarterback to the Denver Broncos, according to multiple reports.