SEATTLE - Tacoma and Seattle rank among the worst-run large cities in the U.S., according to data from WalletHub.

The finance website assembled a list of the 150 largest cities in the country, then weighed their services against the total budget per capita spent on them. 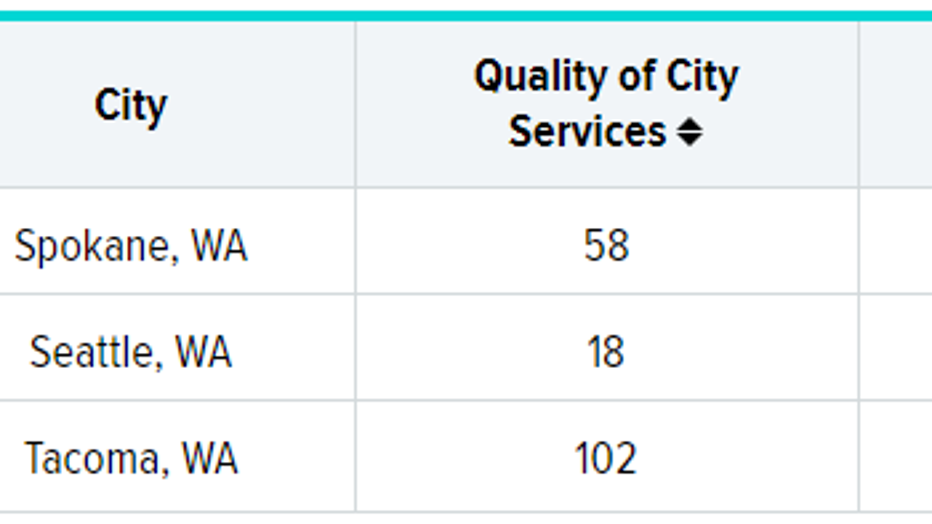 Ranking table including only the metrics of Washington's cities on the list. (WalletHub)

Seattle, on the other hand, ranked 118th—but earned incredibly high marks for its services, which are ranked 18th in the lot. Holding the city back, the data suggests, is its bloated spending, ranked the 140th most expensive budget per capita.

The Emerald City ranks higher than both Tacoma and Spokane for safety, which includes metrics like violent crime, property crime, motor fatalities per capita, homelessness and perception of safety.

WalletHub’s methodology creates scores for "city services" based on a combination of financial stability, education, health, safety, economy, infrastructure and pollution. These criteria are represented by measurements like:

According to the website, the worst-run city in America is Washington, D.C., with the highest budget spent on city services that only rank 55th. The best-run city is Nampa, Idaho, with city services ranked at an admirable 21st, with the lowest total budget per capital of all 150 cities.

RELATED: The best, worst states for millennial wallets in 2022: Report

For a more detailed breakdown of the rankings, visit the WalletHub website.