Seattle police say 354 personnel have not submitted proof of vaccination

Officers are required to be vaccinated under the state mandate.

SEATTLE - At least 292 employees within the Seattle Police Department have yet to submit proof of vaccination as the Oct. 6 deadline set by interm chief Adrian Diaz in an email came and went.

However, a spokesperson with the department told FOX 13 News political reporter Brandi Kruse that in addition to those 292, 111 of those people have requested vaccine exemptions.

That brings the total to 403 employees whose vaccination status is unknown, which equates to about 39% of the SPD workforce.

The announcement comes a week after interim chief Adrian Diaz submitted a letter to department staff saying there were "possibly hundreds" of unvaccinated individuals at the Seattle Police Department, which could "create a disruption of unit assignments."

Monday, Oct. 4 was the last day officers can receive their second dose of the Pfizer or Moderna vaccine or the single-dose of Johnson & Johnson to qualify for the state's Oct. 18 vaccine mandate. 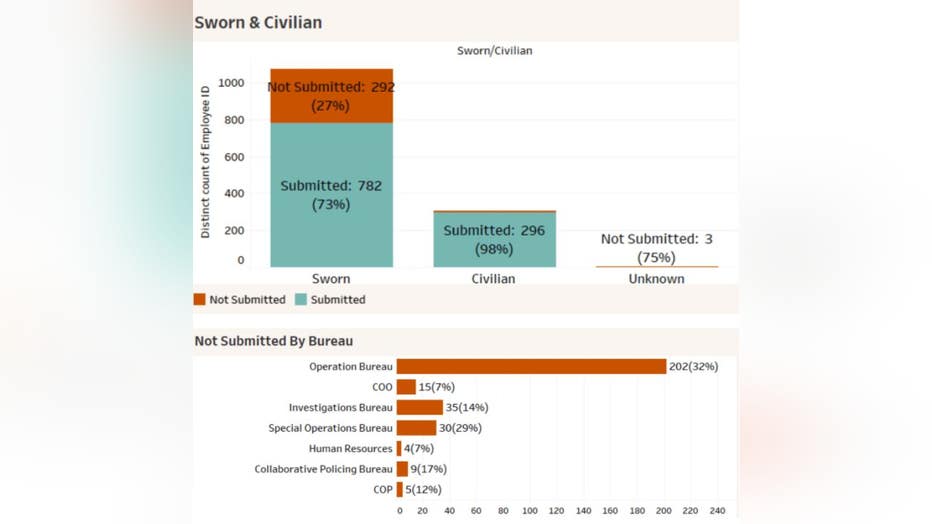 Graphic from the Seattle Police Department

"At the moment – we have to assume we have hundreds of unvaccinated individuals based on the information submitted," Diaz said in the letter.

SPD employees had until Tuesday, Oct. 5 to submit their proof of vaccination, according to Diaz's letter. However, Seattle Police Department Human Resources office emailed out a clarification saying the deadline for submission of vaccine verification forms is Oct. 18.

According to Seattle police, the majority of those who have not submitted proof of vaccination are sworn-in employees.

On Oct. 5, SPD reported that 354 employees did not show proof of vaccination. The following day, the department dropped the number to 292. They did not include the 111 of those who requested exemptions in their initial total.

It's unclear why the department did not include the 111 exemption requests in their initial totals on Oct. 5 or Oct. 6.

In a lengthy one-on-one interview with Brandi Kruse, Seattle Mayor Jenny Durkan defended her decision to mandate COVID-19 vaccines for city employees but declined to say whether she would make good on threats to fire those who don't comply.

Since the height of the 2020 defunding police debate, the Seattle police department has lost approximately 300 officers. Right now, they have around 1,043 deployable officers.

Seattle mayor defends vaccine mandate, refuses to say whether she will fire officers who don't comply

Seattle Mayor Jenny Durkan defended her decision to mandate COVID-19 vaccines for city employees but declined to say whether she would make good on threats to fire those who don't comply.