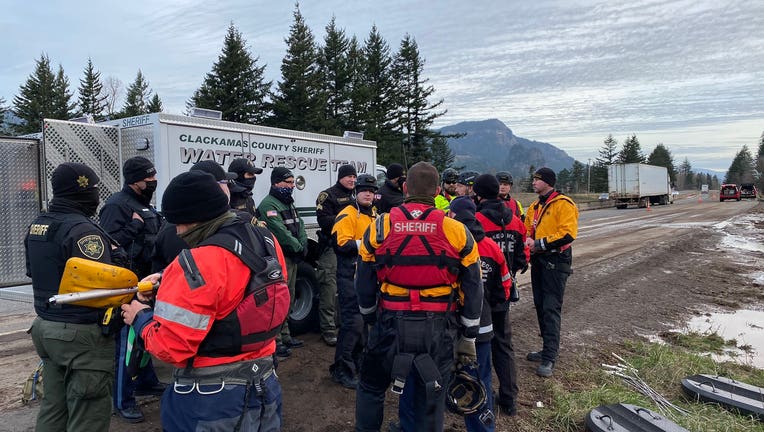 PORTLAND, Ore. (AP) - Searchers used inflatable yellow rafts and drove metal poles into deep mud Thursday as they searched for a woman who was swept away by a landslide in Oregon during a powerful winter storm.

Authorities said in social media posts that they have found part of the SUV that 50-year-old Jennifer Camus Moore, of Warrendale, Oregon, was driving when she was swept away Wednesday but have not located her.

Moore, a registered nurse, was caught up in a landslide in the Columbia River Gorge that was triggered by heavy rain and high winds that pounded the Pacific Northwest on Tuesday and Wednesday. The cliffs around the search area near the small community of Dodson, Oregon, remain unstable.

On Wednesday, searchers used thermal imaging to try to locate Moore without success, but it was too dangerous to send teams into the mudflow. On Thursday, the Clackamas County Sheriff’s Office tweeted out video of searchers using yellow inflatable rafts to navigate the dangerous terrain in mud up to 10 feet (3 meters) deep.

The slide was triggered by a powerful Pacific Northwest storm that swept into the area late Tuesday and Wednesday. Heavy rainfall and high winds left more than a half-million people without power, felled trees across Oregon and Washington and swept a tractor-trailer off a bridge. Localized flooding and debris flows shut down roads throughout the region, including a portion of Interstate 84 in Oregon.

One person in Spokane, Washington, died Wednesday when a tree fell on a car and trapped a woman inside.

School districts were also forced to cancel classes because Internet service was down and students couldn’t access online classes.