RENTON, Wash. - Charges have been filed against a Renton mother under investigation for "medical child abuse," a case prosecutors say is something they haven't seen in recent memory.

The investigation into 31-year-old Sophie Hartman began with a series of doctors who believed her now 6-year-old adopted daughter was being given unnecessary medical treatment at the urging of her mother.

Court documents say the child has had nearly 500 medical appointments since she was around 2 years old and has had what doctors called an "unnecessary medical procedure," with a surgically implanted feeding tube, as well as a cecostomy tube, to help flush the intestines. The child also had leg braces and a wheelchair despite doctors telling her mother that they were unnecessary, according to court documents.

"Consultation was requested of the Safe Child and Adolescent Network (SCAN) in early 2019 by a group of (redacted) specialists and providers at Seattle Children's Hospital because of a concern regarding a pattern of parental requests for increasingly invasive procedures based upon undocumented signs and symptoms reported by the parent," investigative reports read.

A report co-authored by four medical professionals on the child’s care team, reviewed and signed by the medical director for Seattle Children’s Hospital, calls the risk to her child "profound."

"This situation is a case of medical child abuse … " the report reads. "It is not necessary to know the possible motivation of a caregiver, only the outcome of the behavior. It is my concern that this pattern has resulted in unnecessary medical testing, medication, procedures, surgeries and debility of this child."

The report was sent to the Washington State Department of Children, Youth, and Families in February 2021. DCYF then contacted the Renton Police Department who began their investigation.

The child was given a wish by the Make-a-Wish foundation in 2018. 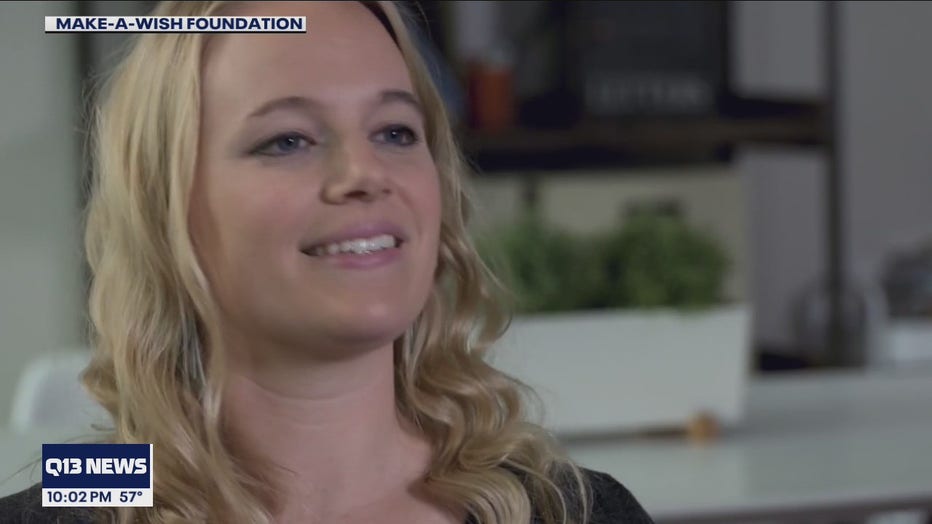 In a Make-a-Wish video, Hartman describes the impact of AHC, a disease she says her daughter had been diagnosed with, saying "at any given time, she can go paralyzed."

"She can lose the ability to talk and go into all different types of seizures and have extreme pain. It's really tough," Hartman says in the video.

In the same video, Hartman also says, "Doctors, even the best pediatric specialists, do not know what to do and do not have treatment options…she needs access to oxygen because her breathing shallows and slows; she depends on her feeding tube when she's unable to eat."

According to search warrants, Hartman's daughter was diagnosed with AHC, but medical providers told detectives the diagnosis was based on information given to them by Hartman regarding her daughter's symptoms.

It was also noted that these symptoms, including severe seizures, had not been observed by anyone other than Hartman. During the course of the investigation, a doctor from Seattle Children's Hospital told detectives medical findings suggest the child does not have the disease.

In 2019, after her daughter received her wish, Hartman spoke about the child's "disorder" at a Make-A-Wish fundraiser, saying to the crowd that the disorder "has been likened to a time bomb, that is a human time bomb for which there is no cure…"

"For us, this is what life looks like. It's navigating constant traumatic chaos, making plans that will inevitably fall through and battling resentment and bitterness for all that is outside of our control," Hartman says.

A statement sent to Q13 News from Make A Wish says:

"We are deeply saddened and dismayed to learn about the alleged child abuse case involving one of our former wish families. As a child-centered nonprofit, the health and well-being of our wish children is always of paramount concern to us. We work very closely with medical professionals throughout the wish process – from approving wish paperwork to ensure the child is eligible for our program, to approving the wish itself so it is safe and appropriate given the child’s medical diagnosis. This is a very serious allegation and any threat to the wellbeing of a child is not in alignment with the child-centered focus of our mission. We hope this matter is quickly remedied in the best interest of the child."

Investigators say after the girl was removed from her mother’s care in March and was observed at a local hospital for 16 days. "At no point during her admission were there any findings or reported symptoms to support any of her prior diagnoses. All the available evidence obtained during the course of her admission suggests (redacted) is a health young 6-year-old," court documents read.

Court documents also say detectives found diary entries from Hartman in which she allegedly mentioned various times she lied about having different illnesses when she was younger, such as meningitis and mono.

Investigators also zeroed in on a diary entry in which Hartman allegedly wrote, "when it comes to suffering, I am a compulsive liar/exaggerator."

Hartman's attorneys issued the following statement on her behalf:

"Sophie Hartman is the mother of a young child with a rare neurological condition diagnosed and treated by doctors at Duke University Medical Center. Despite overwhelming objective evidence in the medical record supporting this diagnosis, the King County Prosecuting Attorney has charged Ms. Hartman with assault of a child in the second degree and attempted assault. These charges are based on false statements and misrepresentations of the medical record by a doctor at Seattle Children’s Hospital who has never seen the child or spoken with Ms. Hartman. Ms. Hartman is innocent of these charges.

Ms. Hartman’s child was diagnosed with a rare neurological disease, Alternating Hemiplegia of Childhood, by one of the few expert pediatric neurologists in the world from Duke University and by a neurologist at Mary Bridge Hospital in Tacoma. The child has been evaluated and treated by the doctors at Duke for three years. Contrary to the allegations of the King County Prosecuting Attorney, the child’s diagnosis was made by more than one doctor, is legitimate, and is based on a substantial record beyond the reports and information provided by Ms. Hartman. That record includes independent medical examinations by multiple doctors, direct observation of the child by doctors and nurses at Duke and at Seattle Children’s Hospital, standardized testing results, videotapes of the child’s symptoms, MRI, EEG and other diagnostic tests. The King County Prosecuting Attorney has the medical records from Duke as well as records from Seattle Children’s Hospital amply supporting the diagnosis and the consistent reports of Ms. Hartman.

The medical records in this case have been reviewed by Dr. Eli Newberger, a medical child abuse doctor with 40 years of experience, who has advised the King County Prosecuting Attorney that filing charges against Ms. Hartman is a "miscarriage of justice." Dr. Newberger’s letter is attached. The victims in this case are Sophie Hartman, her children and her family who are having to fight wholly unjustified charges."

In a letter addressed to the King County Prosecutor's Office, Dr. Newberger, who reviewed the case and all medical records involved per Hartman's attorneys' request, says in part, "In my opinion, within the bounds of medical and scientific certainty, they document that this child is currently suffering the grave and disabling symptoms of AHC.

"The medical records show that Ms. Hartman did not simply invent symptoms consistent with an AHC diagnosis. To the contrary, I see evidence of a parent faced with a myriad of challenging symptoms and issues … who was caught between medical practitioners with diverging views," Newberger says in the letter.

"From my review, there is no history, psychological, physical examination, or neurological evidence that contradicts the diagnosis of AHC, much less justifies a diagnosis of ‘medical child abuse'…I believe filing criminal charges against Ms. Hartman would be a serious miscarriage of justice," he continues.