A ramp ceremony was held at Kabul’s Hamid Karzai International Airport on August 27 for the 13 United States service members who were killed in a suicide bombing there the previous day. (Credit: DVIDS via Storyful)

WASHINGTON - U.S. military officials have released sobering pictures of the ramp ceremony held for the 13 U.S. service members who were recently killed in a suicide bombing at Kabul airport in Afghanistan last week.

The photos show the flagged-draped cases carrying the fallen Marines, Navy sailor and Army soldier as they were being transferred to a military aircraft on the runway at Hamid Karzai International Airport on Aug. 27.

The bodies of the fallen service members arrived at Dover Air Force Base in Delaware on Sunday, where a dignified transfer occurred with President Joe Biden attending. Silence fell over the attendees as the bodies were removed and placed in transport vehicles. The Bidens held their hands over their hearts while the military attendees offered salutes. 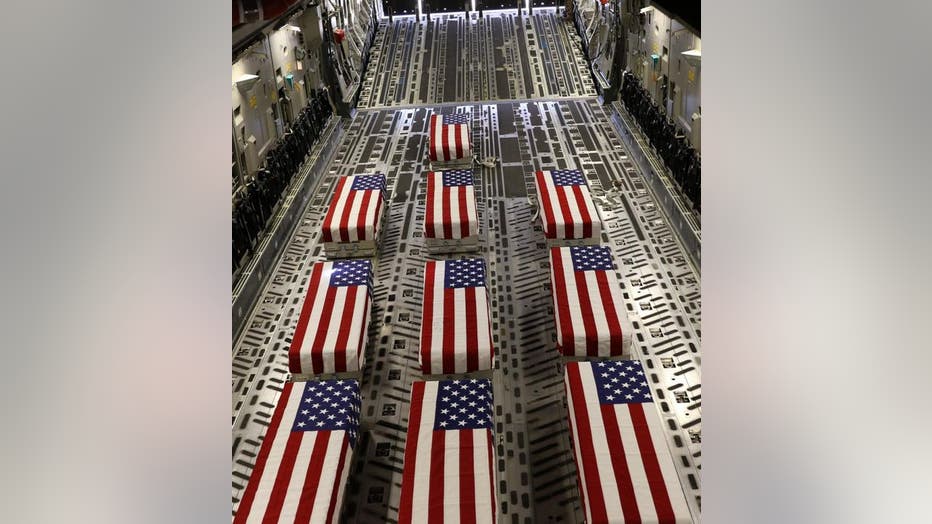 13 U.S. troops were killed in a suicide bombing at Kabul airport. (Credit: DVIDS via Storyful)

Biden and first lady Jill Biden also met Sunday with the families of the 13 U.S. troops.

The Department of Defense identified the fallen as a Navy sailor, Army soldier and 11 Marines. They are as follows:

American and Western forces have been drawing down their presence in recent months, which the Taliban capitalized on as they swept back into power. This culminated with the fall of Kabul on Aug. 15.

Since then, Afghans have flocked to the airport in Kabul, desperate to get out of the Taliban’s reach. American troops have been facilitating their evacuation, making the Kabul airport a prime target for an attack.

Biden called the slain troops "heroes who made the ultimate sacrifice."

"Their bravery and selflessness has enabled more than 117,000 people at risk to reach safety thus far," Biden said. "May God protect our troops and all those standing watch in these dangerous days."

Jordan Smith and the Associated Press contributed to this report. This story was reported from Los Angeles.