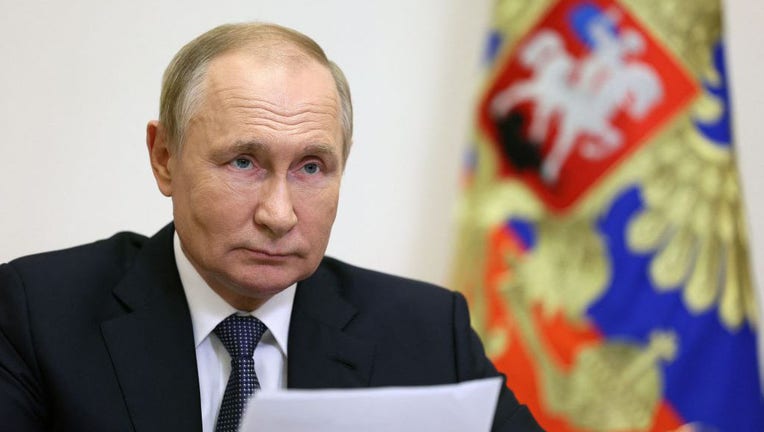 FILE - Russian President Vladimir Putin meets with Governor of Magadan Region via a video conference call at the Novo-Ogaryovo state residence, outside Moscow, on Oct. 21, 2022. (Photo by GAVRIIL GRIGOROV/SPUTNIK/AFP via Getty Images)

GENEVA - Russian President Vladimir Putin would sacrifice "10 or 20 million soldiers" to win the war with Ukraine and ensure his political survival, a former Russian diplomat warned in a recent interview.

Boris Bondarev, who quit Russia's permanent mission at the United Nations in Geneva in protest of Russia's invasion of Ukraine, issued the warning in an interview with Sky News published on Sunday.

"I think the 20 years of him in power have been very lucky for him," Bondarev, who is currently based in Geneva, told the news outlet. "He is not smart, he is just lucky. Now I think his luck is over."

Bondarev served more than 20 years in the Russian Foreign Ministry. When he resigned from his post in May, Bondarev wrote that he had "never been so ashamed of his country as on February 24 of this year," which was the date of Russia’s invasion.

In speaking to Sky News, Bondarev said that Putin understands "if he loses the war, it will be the end for him."

"You should have no doubt about it, he may sacrifice 10 or 20 million Russians just to win this war just to slaughter all Ukrainians because it's a matter of principle. It's a matter of political survival to him," Bondarev told the news outlet.

Russian President Vladimir Putin ordered a partial call-up of military reservists to bolster his forces in Ukraine, a move that sparked rare protests across the country and led to hundreds of arrests. The announcement sent Russians scampering for flights, sparked by fears that Russia's borders could close or that Putin could expand the call-up.

Russia has faced some stinging battle defeats in the now eight-month-long war. In what could be another sign that his invasion is not going as planned, Putin last week ordered martial law in four Ukrainian regions that Moscow illegally annexed in recent weeks and where Russian forces have full or partial control.

Putin didn’t immediately spell out the powers that martial law would grant. But they could include restrictions on travel and public gatherings, tighter censorship, and broader powers for law enforcement agencies, according to the Associated Press.

Proving incapable of holding all the territory his military has seized and struggling with manpower and equipment losses, Putin has stepped up bombardments from the air in recent weeks, with a series of strikes targeting Ukrainian power plants and other key infrastructure.

Those tactics differ from the Kremlin’s initial strategy in February, when Russian commanders had seemingly sought to spare some utilities they perhaps thought they might later need.

But after being routed from around the capital, Kyiv, and then pushed back in the south and east by the ongoing Ukrainian counteroffensive launched in late summer, with the backing of Western-supplied weaponry, Moscow is now increasingly resorting to targeting Ukraine's power plants and other energy infrastructure, threatening a miserable winter for millions of Ukrainians.

Meanwhile, Bondarev, who worked in nuclear disarmament, admitted that he "did not believe President Putin was seriously going to start the war" before it happened. But now, he feels that threat of nuclear war should not be taken lightly.

"I believe that there can be some plans to somehow deploy nuclear weapons during this war in Ukraine," Bondarev told Sky News. "The West, I think, must be consistent to remove Putin because while he and his regime is still in power in Russia, the threat of nuclear war will not go anywhere."

Putin is using the potential of nuclear catastrophe to "compel other countries to do whatever he wants," Bondarev added.

Western leaders, including U.S. President Joe Biden, have faced the task of responding to Russia’s war without escalating an already-heated conflict fraught with potential nuclear implications.

Speaking to the United Nations last month, Biden declared that Russia has "shamelessly violated the core tenets" of the international body with its war in Ukraine. He also called on all nations, whether democracies or autocracies, to speak out against Russia’s "brutal, needless war" and to bolster’s Ukraine effort to defend itself.

"We will stand in solidarity against Russia’s aggression, period," Biden said.

In a speech before the United Nations, President Joe Biden gave a forceful condemnation of Russia's "brutal" war in Ukraine.

Also last month, Biden reiterated that the U.S. and NATO allies would not allow Russia to attack any of the nearby NATO members without facing a strong military response.

"America is fully prepared, prepared with our NATO allies to defend every single inch of NATO territory. Every single inch," Biden said on Sept. 30. "And so, Mr. Putin, don’t misunderstand what I’m saying. Every inch."

When asked about Western leaders’ responses to Putin, including Biden, Bondarev told Sky News: "When you say that you don't want to provoke a bully, it gives him the wrong signal. It shows him you are afraid of him, and he must continue and escalate further. You must send Putin a clear signal that if he wants escalation, he will get it."