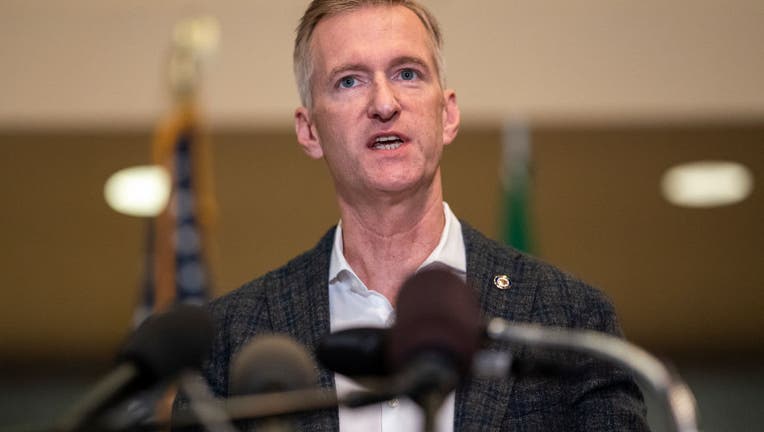 PORTLAND, OR - AUGUST 30: Portland Mayor Ted Wheeler speaks to the media at City Hall on August 30, 2020 in Portland, Oregon. A man was fatally shot Saturday night as a Pro-Trump rally clashed with Black Lives Matter protesters in downtown Portland.

PORTLAND, Ore. - Portland, Oregon, Mayor Ted Wheeler said Monday the ongoing criminal destruction and violence occurring in his city, which has been the epicenter of protests against racial injustice for eight months, is "unacceptable."

"The mayor is cooperating with the police investigation and encourages others involved to do the same," the statement said.

Wheeler, who was re-elected in November, has been targeted before by left-wing demonstrators, including some who smashed windows and set fires inside his condo building.

Earlier this month, Wheeler was accosted by a group while he was dining at a restaurant outside in Northwest Portland. A member of the group started swatting at Wheeler as others yelled obscenities at him.

On Monday, Wheeler said people participating in criminal destruction, whom he described as "thugs" and predominately "middle-age to young white men," should be arrested, investigated prosecuted and held accountable for their actions.

For months demonstrations were held nightly in Oregon’s largest city, following the killing of George Floyd in Minneapolis in May. Many ended with clouds of tear gas and clashing with police or federal officers.

Most recently, on Wednesday following the inauguration of President Joe Biden, more than 150 people gathered outside the U.S. Immigrations and Customs Enforcement building in Portland’s South Waterfront. Portland police said protestors were throwing rocks and eggs and vandalizing the building. Six people were arrested and officers declared an unlawful assembly.

The demonstration was one of several that took place that day — earlier far-left protestors smashed windows at the Democratic Party of Oregon building in Northeast Portland. Eight people were arrested.

Wheeler said he was proud of the police response Inauguration Day.

"Arrest them, do the investigative follow up, prosecute them and have them feel the pain of the poor choices they have perpetrated on all of us in this community," Wheeler said about protestors partaking in criminal activity.

Along with prosecuting, Wheeler said he thinks those who have vandalized buildings should have to sit down with business owners and employees to hear how their actions have impacted them.