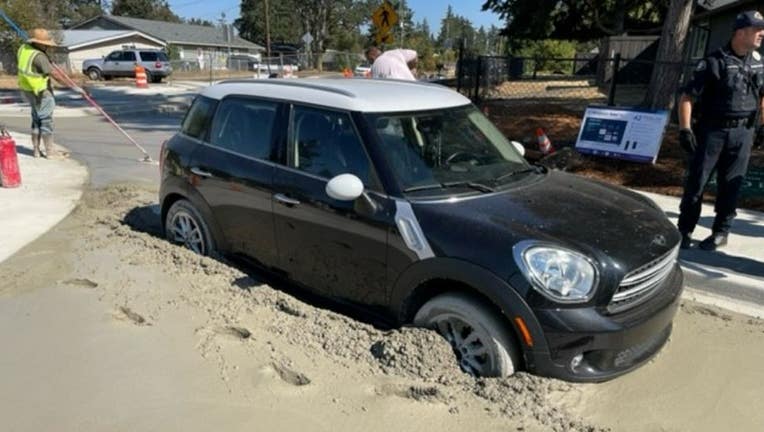 LAKEWOOD, Wash. - A mother was arrested early Tuesday morning after she reportedly drove a stolen Mini Cooper through an active construction zone, then ditched the car after it got stuck in freshly poured concrete.

According to the Lakewood Police Department (LPD), at 1:53 a.m., officers were called to Edgewood Ave SW and Winona St SW for reports of a stolen vehicle. Authorities say the 32-year-old woman was driving with her four-year-old son in the backseat during the incident.

Witnesses told police that after the car got trapped in concrete, the woman threw a TV, an Instant Pot and a half-consumed bottle of whiskey out of the car before walking eastbound on Winona Ave.

The LPD says police were able to catch up with the woman and detain her. Authorities later learned that the Mini Cooper and the other items were stolen from the suspect’s mother’s home earlier that morning.

RELATED: Suspect shoots at troopers, barricades himself in car with gunshot wounds from return fire

The suspect was arraigned in Lakewood Municipal Court Tuesday morning on charges of driving under the influence, two counts of third-degree domestic violence theft, negligent driving, and hit-and-run property damage.