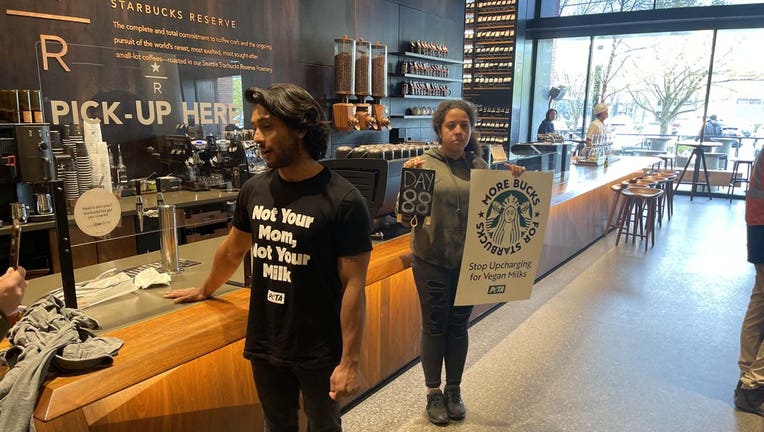 Protestors superglued themselves to the counter at the SODO Starbucks Reserve (PETA // Twitter).

PETA demonstrators superglued themselves to the counter at a Starbucks Reserve store at the Seattle-based company's headquarters on Wednesday, protesting the higher price of vegan milk.

Starbucks charges customers extra for dairy-free alternatives to milk in their drinks, and for years, activists have pushed the coffee corporation to drop the surcharge—describing it as an extra fee for being lactose intolerant, environmentally friendly or vegan.

The Seattle-based chain dropped the vegan milk surcharge in the U.K. in January, but has not extended that policy change to anywhere else in the world.

The organization called on Starbucks CEO Howard Schultz to drop the surcharge for dairy-free milk alternatives if he "truly cares about the environment," saying vegan milk is better for humans, other animals and the planet.

According to PETA, Starbucks gave outgoing CEO Kevin Johnson a $60 million payout when he resigned, which they say could have covered the 70¢ charge on vegan milk for more than 85 million drinks.

Police were called to the coffee shop to unstick the protesters, and PETA says the two face felony charges of theft of services and destruction of property.