PORTLAND, Ore. - Gov. Kate Brown defended her decision Friday to implement further restrictions in one-third of Oregon’s counties, saying for the second week in a row the state leads the nation with the fastest-growing infection rate and that she is "gravely concerned" about hospital capacity.

Restaurants in 15 counties were required to close their indoor dining Friday and capacity was significantly reduced in gyms and indoor entertainment spaces. The restrictions have been criticized by business owners and Republican lawmakers.

"I was presented with data showing two paths that Oregon can take — one in which we took no additional action and stood by while more people die from this disease," Brown said during a news conference Friday. "Or another that would require a temporary tightening of restrictions for certain counties, but could save hundreds of lives."

"I chose to save lives." 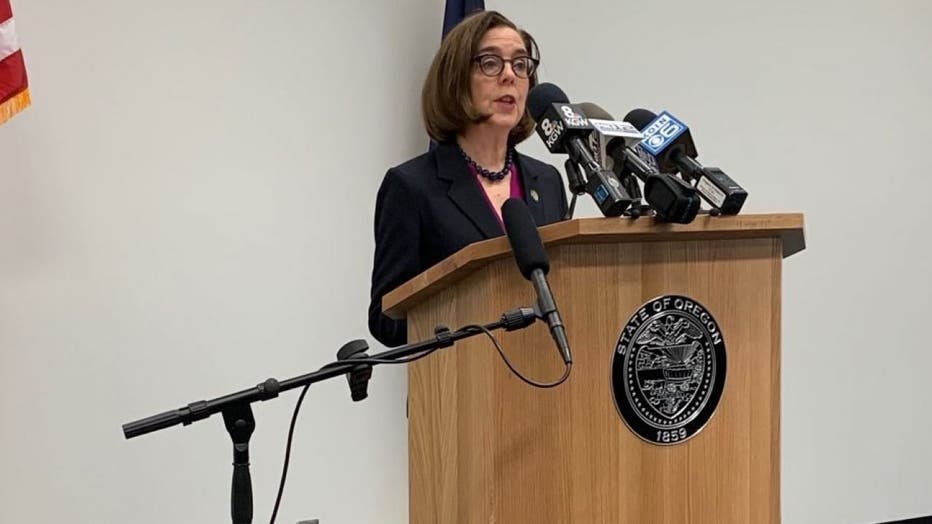 This week, the Oregon Health Authority reported that the state recorded its fifth straight week where cases have increases by 20% more.

Since the beginning of the month, COVID-19 hospitalizations have more than doubled. As of Thursday, 339 people were hospitalized with the virus in Oregon.

Brown said COVID-19 data over the past month has been "eye opening" and last week she announced that 15 counties —- Baker, Clackamas, Columbia, Crook, Deschutes, Grant, Jackson, Josephine, Klamath, Lane, Linn, Marion, Multnomah, Polk and Wasco — would be moved to the "extreme risk" level.

But many have asked, at what cost?

"The move by the Governor’s Office is tone deaf and offensive to tens of thousands of Oregonians working in restaurants and bars across our state attempting to pay their bills. COVID-19 closures and restrictions on indoor dining are clobbering Oregon’s restaurants, bars and hospitality sector," Jason Brandt, the President and CEO or the Oregon Restaurant & Lodging Association said this week.

Brandt said so far more than 1,000 restaurants and bars have closed due to the pandemic recession.

"The uncertainty and arbitrary nature of targeting restaurants has made it impossible for these local businesses to plan during a time when they’re already struggling to survive," Brandt said.

Earlier this week, the association along with 80 county commissioners sent a letter to the governor asking her to reconsider her recent "approach to virus mitigation measures."

Brown said the decision to re-implement restrictions was difficult, but necessary to give time for more people to get vaccinated. In addition the governor announced that $20 million in relief funds is now available for businesses impacted by the "extreme risk" category.

"Economic relief is something I can do, as your governor, to help Oregonians impacted by this fourth surge," Brown said. "What I can’t do is bring back someone’s life lost to this virus."

In addition, on Thursday Brown extended the state’s COVID-19 emergency order until the end of June. The declaration is the legal underpinning for the executive orders the governor has issued and allows the orders to stay in effect.

Brown reviews and reevaluates each of her emergency orders every 60 days, to determine whether those orders should be continued, modified or rescinded.

This week state Republican lawmakers protested the governor’s declaration and increased restriction on the Senate floor by requiring bills be read in full before final passage — a slowing tactic that had been used by Republicans in the House earlier this session before an agreement was reached between the two political parties.

"We are not obligated to let the Governor railroad Oregonians without accountability and transparency," Girod said in a statement.

Brown says she intends to fully reopen the economy by the end of June.

So far, more than 1.2 million people in Oregon — about 30% of the state’s population — have been fully vaccinated.