The middle is the loneliest place in politics

“In a couple of hours in Seattle we will file a complaint that is pushing back on and seeks the court’s judgment on the Trump administration’s decisions to withhold funding from cities that they have without cause and without law determined to be anarchist cities,” New York City Corporation Counsel Jim Johnson said.

The Justice Department last month identified New York City, Portland and Seattle as three cities that could have federal funding slashed under a memorandum by Trump that sought to identify localities that permit “anarchy, violence and destruction in American cities.”

Officials in all three cities criticized the designation at the time. “I said weeks ago if the Trump administration persisted in trying to illegally take away funding from New York City we would take them to court, and we will beat them in court,” New York City Mayor Bill de Blasio said Thursday.

Johnson, who joined de Blasio at the mayor’s daily briefing, said the cities are acting now because the federal government has begun taking concrete steps to withhold funds. “They’ve actually taken this anarchist designation and started to include it in applications for federal grants,” Johnson said.

Johnson said as much as $12 billion in federal funds affecting health, transportation and law enforcement programs could be at stake.

The Justice Department said the three cities were designated as “anarchist” jurisdictions because they met criteria including “whether a jurisdiction forbids the police force from intervening to restore order amid widespread or sustained violence or destruction” and whether the city “disempowers or defunds police departments.” 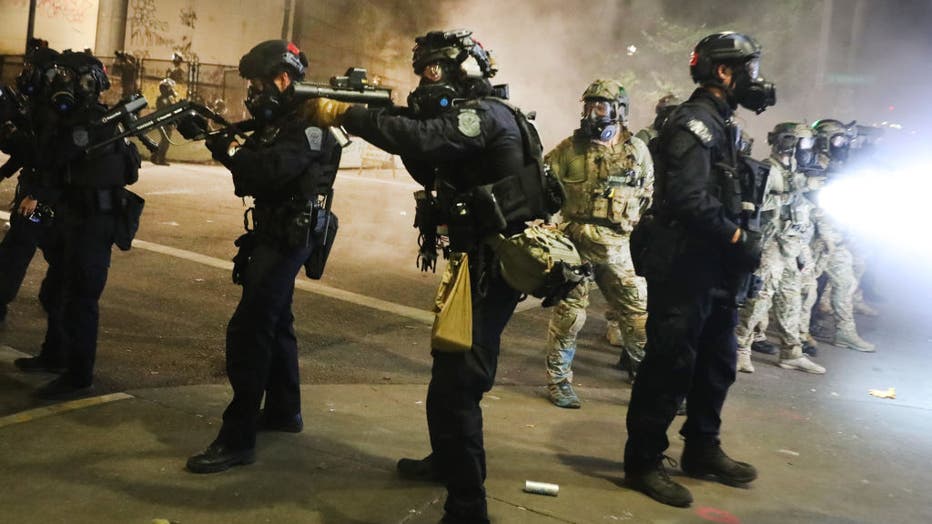 Federal police face off with protesters in front of the Mark O. Hatfield federal courthouse in downtown Portland as the city experiences another night of unrest on July 27, 2020 in Portland, Oregon. (Photo by Spencer Platt/Getty Images)

The move came as Trump sought to label cities run by Democratic mayors as under siege by violence and lawlessness, despite the fact that most of the demonstrations against racial injustice have been largely peaceful.