Gov. Inslee: Most schools unsafe to reopen in Washington state

Washington officials broke down their school guidelines - which are recommendations, not requirements - into categories for counties deemed high risk, moderate risk and low risk.

SEATTLE - Gov. Jay Inslee said Wednesday that schools in the majority of Washington’s counties should strongly consider online-only learning for students this fall due to COVID-19 and canceling or postponing sports and all other in-person extracurricular activities.

Inslee made the announcement with the superintendent of public instruction for Washington and the state’s health officer.

“This pandemic will continue to grow unless something changes,” Inslee said, adding if every school district brought all students back "I believe we would see a dangerous increase of COVID activity.”

Authorities say the virus is still spreading too extensively in the state, which saw the nation’s first confirmed virus case in late January. Since then Washington has seen more than 59,000 confirmed coronavirus cases and more than 1,600 deaths.

Washington officials broke down their school guidelines - which are recommendations, not requirements - into categories for counties deemed high risk, moderate risk and low risk.

Twenty-five of the state’s 39 counties are considered high-risk, meaning there are more than 75 cases per 100,000 people, including all three counties in the Seattle metro area. Many schools in the Puget Sound region have already announced plans to start the year with an online-only model.

RELATED: Gyms will need to triple distance for exercising indoors

For moderate-risk counties (25 to 75 counties per 100,000) Inslee and others say distance learning should be considered for middle and high school students. In-person learning could be an option for elementary students and those with special needs. Extracurricular activities should also be cancelled. Nine counties are currently listed as moderate risk.

In the five, smaller low-risk counties where there are fewer than 25 cases per 100,000 officials recommend a hybrid distance/in-person schedule for older students and in-person learning for elementary school students.

Inslee also announced $8.8 million in federal funding to help the state pay for internet plans and technology needs for low-income families. Critics of online learning say not enough consideration has been given to students who lack reliable internet or computers. 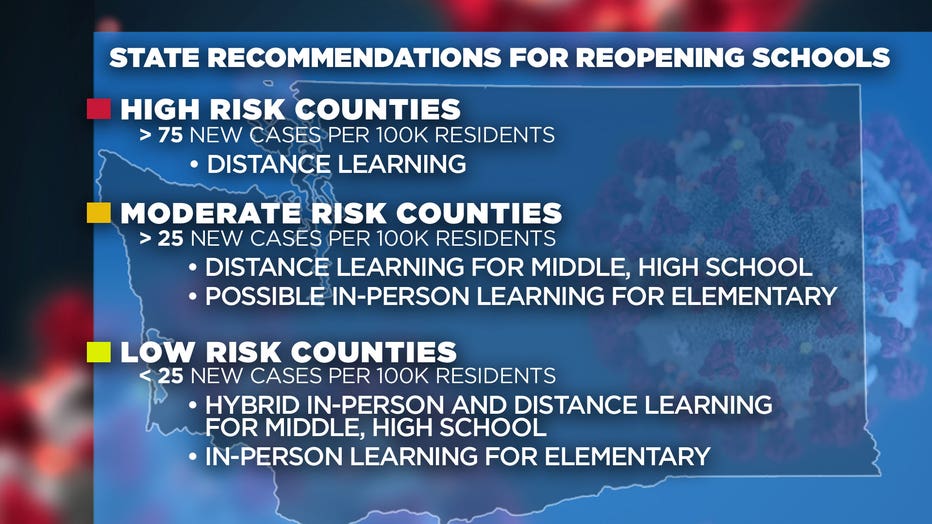