SHORELINE, Wash. - An employee at a retail marijuana shop in Shoreline knows he is lucky to be alive after he was shot six times during a robbery last month. Two suspects walked into Dockside Cannabis on Aurora Ave N just before 11 p.m. on Jan. 5. Huckleberry Kid, his real name, says he just reacted when one of the men put a gun in his face and demanded money.

"I grabbed the gun and tried to keep control of it, but it was a scary moment," said Kid. "I’m not Bruce Lee, so my handling skills of his gun didn’t keep it away from me."

The 22-year-old was shot six times as both suspects opened fire on him. He spent weeks in the ICU recovering and may still have more surgery ahead.

He staggered into the back room where he collapsed.

"My vision was going out. I was pooling out on the floor. My coworkers were yelling, freaking out saying get 911, call the ambulance," said Kid.

Worried he might not make it, Kid called his girlfriend of 7 years to let her know what happened and that he loved her.

"He started to tell me that he had been shot, that he was bleeding out. I heard his coworkers scream out to call 911. I heard all of their panic and I remember screaming out to him to put someone on the phone and I could tell he was losing consciousness," said Hayley Webster.

FOX 13 News is following yet another assault and robbery at a marijuana business in Puget Sound. The graphic video, obtained only by FOX 13 Spotlight Host David Rose, shows the attack from Sunday evening at Pot Zone in Parkland.

"Our officers quickly were able to provide life-saving measures to that victim by putting on tourniquets on his wounds ultimately helping save his life in the long run," said Shoreline Police Chief Ryan Abbott.

When detectives looked at the surveillance video, they saw that the suspects only got away with a customer’s wallet. Kid says he should have just let the gunmen take what they wanted, but it all happened so fast.

"For 15 bucks pay and a discount at the store, I don’t know if it’s worth it for anyone to be put in that situation as a sitting duck for getting robbed," he said.

He took the job as a budtender because he likes helping people and would consider going back to work but feels stores need more security.

"I think that the government is happy enough taking money from the pharmacies, but they don’t want our pot money. I think they should change that and let us be cash free, so we’re not such a sitting duck in this situation.  We are like the only places getting stuck up at this point," said Kid.

A gofundme has been set up to help Kid with hospital expenses.

King County Major Crimes Detectives are still working to identify both suspects. Crime Stoppers of Puget Sound and Tom Bout with the Cannabis Professionals Network are offering a cash reward of up to $8,000 for information that helps police solve the Shoreline armed robbery or any of holdups at these dispensaries.

"There's an actual task force put together now from the different agencies involved to hunt these guys down and take them into custody.  We’re hoping that some of your viewers will know who these guys are, will anonymously turn them in through our P3 Tips App," said Ret. Sgt. Jim Fuda with Crime Stoppers of Puget Sound. 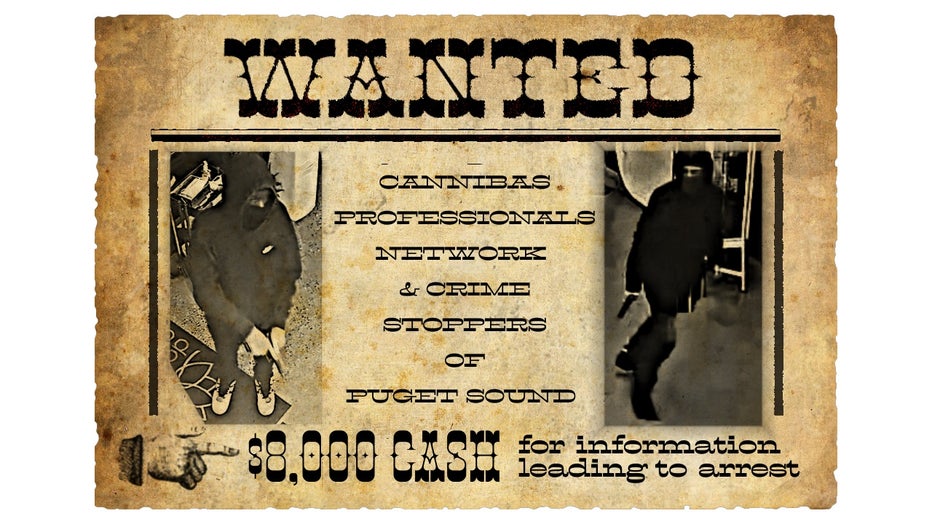 If you have any information to help detectives, please submit an anonymous tip to Crime Stoppers of Puget Sound through the P3 Tips App that you can download to your cell phone or by calling 1-800-222-TIPS (8477) or at www.P3Tips.com.

Marijuana industry is a cash cow for Washington, yet many local stores struggle to stay afloat

Whether you are a pot smoker or not, all the money it generates, and we mean tons of money, impacts us all.