An Apple Air Tag is priced at four for $100 right now. You can stick them anywhere – attaching by Bluetooth to a phone to track, whatever they’re stuck on.

And it goes fast. Dodge products like that are hot these days. But it has also made them popular targets for theft.

"If they want it bad enough, they’re going to take it," Nelson said.

In early December, two days after Nelson bought that Charger, he cruised to Great Lakes Crossing shopping center in Auburn Hills. He shopped for two hours then went to a buddy’s house.

"When I got out I had a notification on my phone, and it said I was as being tracked by an unknown AirTag," he said.

An Apple AirTag is priced at four for $100 right now. You can stick them anywhere – attaching by Bluetooth to a phone to track, whatever they’re stuck on.

"I was able to click on that notification and it gave me an option to have the air tag emit a sound and I heard it underneath my vehicle," Nelson said.

Whoever did this unscrewed a drain cap under the trunk of John’s car and slipped the tag inside.

FOX 2: "What did you think these guys were going to do?"

"Scrap for parts, that’s the biggest thing in Detroit right now," he said.

This bit of high-tech theft has also been reported out of Austin Texas after an Apple AirTag was discovered between the passenger seat and the center console.

In that incident, a man had allegedly purchased a vehicle that was previously stolen. According to law enforcement, he could have potentially been involved in a double theft of a truck.

It's also been reported out of Canada's Ontario Province, where five incidents have been investigated since September 2021.

"It's crazy you can see a map with a dotted red line to wherever you have driven," Nelson said. 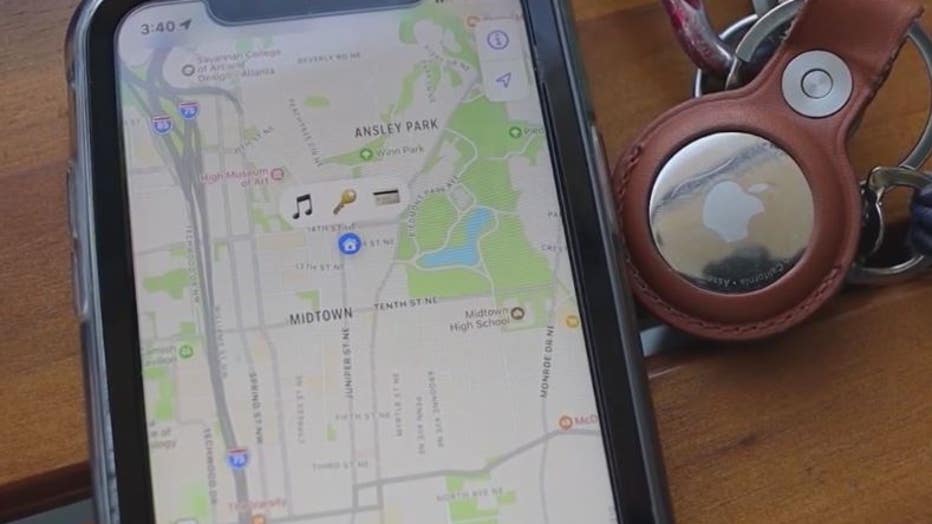 John playing roulette now – with where he parks his cars and questioning everything.

"It could be an inside job, a friend of a friend looking to make a quick buck," he said. "I don't want them to know what I look like, for that reason."

John has a police report made with the Novi Police Department, which has the tracker, so hopefully they can track whoever did this.

How to find an AirTag on your car

An Associated Press article that was published in April 2021 describes AirTags as a "coin-sized devices that can be attached to keys, backpacks, purses and other items to help people track them down via iPhone if they’re misplaced."

The small tracking devices are intended to help people find easily misplaced items. Even in cases where the lost items are too far for a personal phone to pickup, the AirTag can use other Apple devices nearby to let the user know where they are.

In Nelson's case, that second option is why he discovered he was being tracked.

Had he been using a non-Apple phone, it wouldn't have detected the AirTag.

So what should drivers do to protect themselves?

Police have suggested other more general techniques for staying safe. They include: