A restaurant owner is finally out of the hospital after he was shot 11 times during an attempted robbery.

"It is truly is a miracle. I don't know how I am still here."

Three weeks after that horrific night — and just a day after being released from the hospital — Tony says he’s grateful to be alive, but the mental and physical pain is severe.

"I have so many regrets. I should've just let them take whatever I had."

June 4th was a busy Friday night at the Westfield Southcenter mall in Tukwila. Around 9:45 p.m., Tony closed up his restaurant, Palace Korean BBQ, and walked a woman who works for him to her car.

"That’s what’s ironic. I would walk my female employees to their cars to make sure they’re safe."

But when Tony got to his car, he was the one in danger.

"Almost immediately as I sat down, the gun was in my neck. Without even thinking, I grabbed the gun. He said something to me, but I don't remember. I just wanted the gun out of my face."

That’s when the first shots were fired.

"Somehow I got out of the car, and he just unloaded four or five shots into my chest. The pain was so much I was just screaming."

It seemed to be an attempted robbery, but Tony says the two men and woman involved ran off with nothing.

Just one month prior, chaos and violence erupted at the same mall. Hundreds of shoppers ran for their lives. Police believe that attack wasn’t random. But that case, like Tony’s, is still unsolved.

"For someone to unload like that, that means they wanted me dead."

Shot 11 times, Tony’s injuries are severe. He’ll be in a wheelchair for six months.

"When my mother came to visit me, the first time she saw my wounds when they were changing the dressings, she lost it. I’ve never seen her like that. And that’s my weakness." 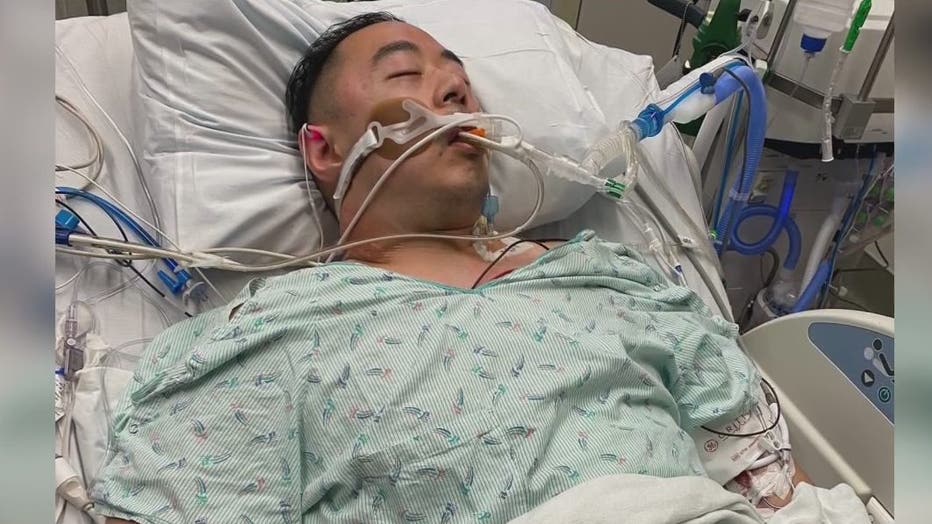 Life will never be the same, but he’s determined to use his second chance for good.

"I'm not going to waste it. I don't want to live in hate, I just want to be happy. I don't need much anymore. i realize that now. I don't need anything. I just need the love of my family."

If you have any information on the shooting please reach out to Tukwila Police. You can also submit an anonymous tip through Crime Stoppers by using the P3 Tips app or by calling 1-800-222-TIPS.

A gofundme has been set up on Tony’s behalf to help pay for his extensive medical bills.