Seattle residents are worried about their kids attending a neighborhood park after one family's kids received threats from a homeless man living at the ball park. Q13's Hana Kim reports.

SEATTLE - A local little league said it's not safe anymore to have their kids on a Seattle playfield.

Homeless tents are nothing new in the Ballard neighborhood, but what’s new are the threats and unsafe conditions against the kids themselves.

"It’s not that it’s an eyesore," mom Andrea Morrison said.

Morrison said her main concern is that kids are being threatened and harassed while playing or practicing on the playfields. She said recently, her 10-year-old son and his friends were at the Ballard Community Center field practicing when a homeless person verbally assaulted them.

"There is someone camped at the dugout and he comes out and starts threatening the kids," Morrison said.

Morrison said the man cursed at the kids and threatened to kill them. The experience has left a lasting impact.

At Gilman Park, it’s a similar concern. The little league serves up to 400 kids and is struggling with a basic need: to keep their youths safe.

On Wednesday, Q13 News saw about a dozen tents either inside or by the perimeter of Gilman Park.

Reich said some parents are questioning dropping off their kids at Gilman Park for baseball and softball practice.

Even before the kids get to Gilman Park, the recommendation is for the kids to use the bathroom at home. Some families don’t feel safe using the park restroom not just because of the trash or even the needles.

"While the girl softball field was practicing there was a gentleman in the bathroom that was naked, overdosed, or died, not sure which," Reich said.

The softball players witnessed first responders hauling the man away earlier this week.

Parents say campers are using drugs while kids are around and porta-potties on the property have also been set on fire. 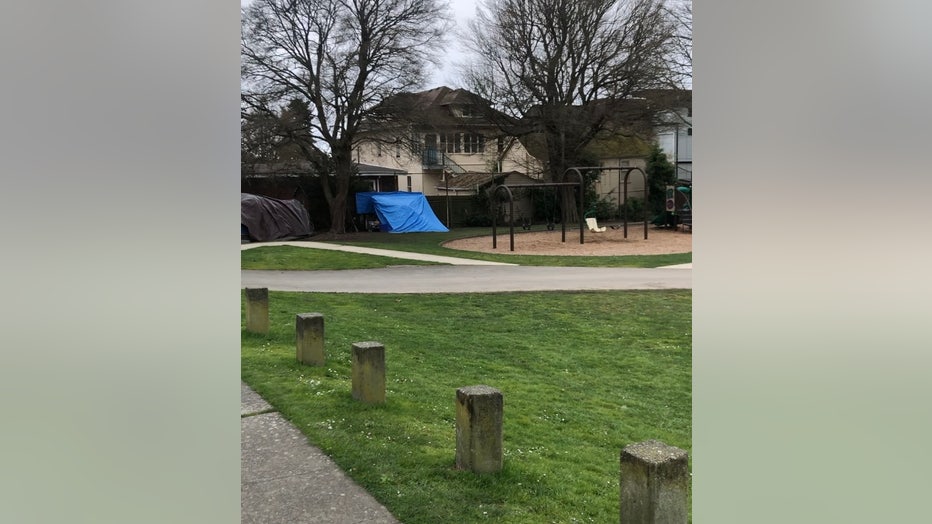 The Ballard Little League pays thousands of dollars to the city to use Gilman.

"We are in the city; field space is limited," Reich said.

That’s why the solution is not as easy as just moving to another field. They’ve reached out to the mayor’s office, council members, and Seattle Parks and Recreation.

"It just gets passed along ... basically no one seems to be responsible, no one says they can help," Morrison said.

The Seattle mom said the lack of action is infuriating and that many homeless people need mental health treatment.

"Where my concern lies is our homeless neighbors who are suffering from mental illness and they are unpredictable, they are taking it out on our neighbors, our kids," Morrison said.

She said rather than concentrating on the fun of baseball, kids are now nervous about their surroundings.

"What is happening at Gilman Park is happening city wide and it is unacceptable - we must address homelessness by providing solutions at the scale of this crisis. I have been working with Ballard Little League and Seattle Parks Department to address the situation at Gilman Park. Citywide, we need to provide safe and adequate places for homeless individuals to come inside so our city’s great parks are able to be used as designed."

The Mayor’s Office sent this statement:

"Encampment removals have been limited over the last year due to COVID-19, but the City believes we have to address encampments on sidewalks, playfields, and parks as we open new shelter spaces like the Executive Pacific Hotel and Kings Inn. Individuals will be offered shelters at these locations from parks and encampments across the City.

As businesses and schools reopen, we will continue to offer these resources, with the same commitment to leading with outreach and addressing the welfare of our unhoused neighbors along with that of nearby residents and businesses, which may mean removal of an encampment if individuals do not accept shelter or the resources offered."