Gun violence in King County this year is up since the same time last year. Q13's Steve Kiggins reports.

In the first three months of this year, fatal shootings have increased 34% compared to the last four years, the report found.

Black or African American victims were the most predominant, vastly outnumbering all the other demographics. In all, 16 people lost their lives to gun violence since January.

Investigators say he was shot and killed answering a knock at the apartment’s front door. His murder is still under investigation, but the shooting had not been counted in numbers the prosecutor shared.

"I thought it was a toy, not a real gun," Estrella’s neighbor told Q13 News.

Nobody else was hurt, even though one bullet flew through the neighbor's window. She asked Q13 News to conceal her identity fearing retribution.

"That was the baddest, worst day of my life," she said.

"Violence is an act of desperation," said Dan Satterberg, the county’s top attorney.

Satterberg said that desperation is growing over last year as more families fall deeper into poverty. Data surrounding gunfire and violence has been recorded by his office since 2017. The pandemic exacerbated inequity, he added.

"One of the things I didn’t anticipate in the pandemic year is the increase," he said, noting violence had increased by 36% in 2020. "In the first three months in 2021, we’re continuing that disturbing that trend."

Nearly 75% of all gunfire is happening outside of Seattle. So far, in 2021, 16 people had been killed and more than 250 incidents of gunfire were recorded. The majority of those victims are Black and African American men 24-years-old and younger. 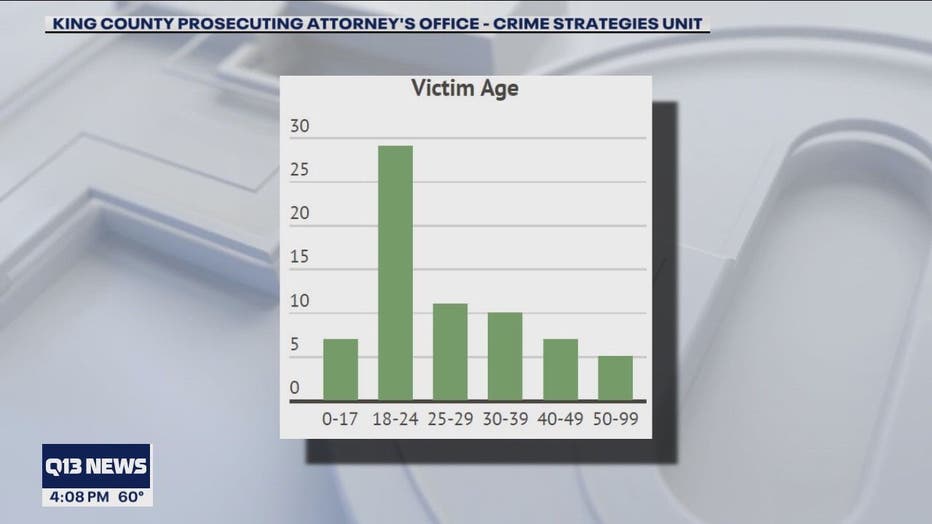 "The county council just appropriated $2 million to work with non-profits who will go out and contact people who are most likely to be involved in gun violence," Satterberg said.

"This is why the system continues to fail over and over again," said Sean Goode, executive director at Choose 180.

Goode’s organization offers a diversion program in King County offering young people a way to avoid sentencing if participants can turn their life away from crime.

However, investments have to make a larger impact with young people, making a material change in their daily lives to produce a lasting impact, he said.

"If we only invest in emergency rooms and ambulances then we are only going to get to people when they are at their most critical moments of their lives," Goode said.

Vicarious trauma inflicts those beyond the injured. Estrella’s neighbor worries what future is in store for her 4-year-old daughter if the violence continues to escalate.

"I wish there was peace and happiness," she said.

Seattle police have not released information about a possible motive or a suspect description in the 16-year-old boy’s case.

The investigation remains active and detectives asked anyone with information about the incident to call SPD’s Violent Crimes Tip Line at 206-233-5000.