PIERCE COUNTY, Wash. - A body believed to be that of Kassanndra Cantrell was found on Tuesday nearly a month after the pregnant woman from Parkland, Washington, went missing, authorities said.

Detectives also said they arrested the person they believe is responsible for her murder. 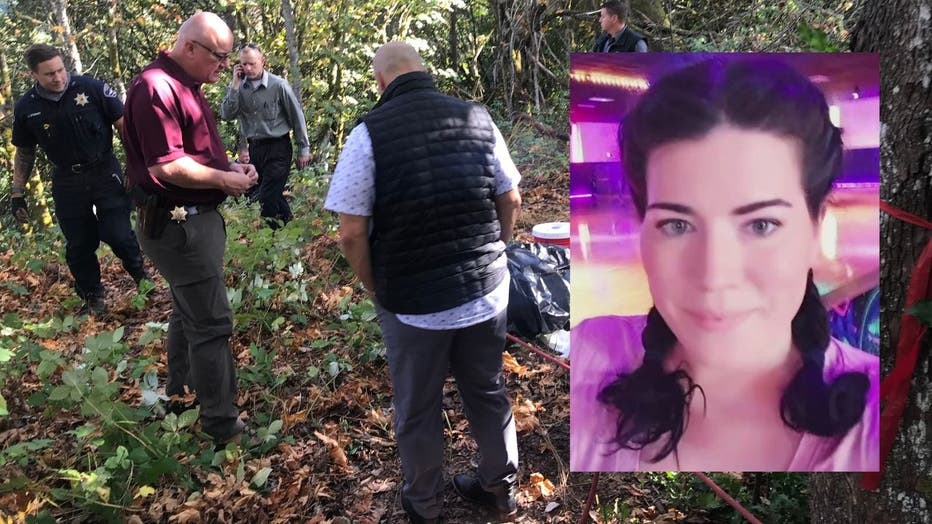 "Utilizing GPS data obtained from Cantrell’s ex-boyfriend’s truck, this morning our detectives conducted a detailed ground search of the areas along Chambers Creek Road W. in University Place," said Pierce County Det. Ed Troyer. "At approximately 2:00 p.m. our detectives found a set of human remains that were wrapped and disposed of over a steep hillside along Chambers Creek.  Search & Rescue Team members from our department and the Tacoma Police Department performed a high-angle ropes operation to recover the remains, which were identified at the scene as Kassanndra Cantrell."

GET THE NEW Q13 FOX APP FOR BREAKING NEWS ALERTS

"Following today’s discovery, members of our SWAT Team arrested Cantrell’s 37-year-old ex-boyfriend at his residence in the City of Tacoma. He will be booked into the Pierce County Jail on murder charges."

Colin Dudley was on investigators' radar long before GPS data from his car led them to Kassanndra Cantrell’s body found Tuesday, according to police search warrants. Although Dudley, 37, and Cantrell, 33, reportedly hadn't dated since 2006, and Dudley said he’s been with another woman for the last 14 years, detectives learned Cantrell had confided in those close to her that he was the father of her unborn child.

Cantrell's loved ones said she was over the moon about her pregnancy when she told them. She’d already picked out names, purchased baby clothes, and toys, and her and her best friend began planning a baby shower.

But when it came to the father of the child, her best friend told detectives Cantrell initially was hesitant to tell Dudley because he reportedly didn’t want children.  He initially made a comment that stuck with her when they dated over a decade ago, stating “if any girlfriend of his got pregnant and wouldn’t get an abortion, he would sue to get full custody, just to spite the mother for having the child.”

This information piqued the interest of detectives. But the first break in the case came five days after Cantrell disappeared, when Tacoma Police discovered her white Mazda parked near the Tacoma Dome train station, with the keys inside. Armed with that evidence and the information about her pregnancy, detectives went to Dudley.  But he was adamant he hadn’t seen or spoken to Cantrell in years and seemed shocked anyone would think otherwise. He told investigators his current relationship was his priority, and he wouldn’t do anything to jeopardize that.

But detectives already had the phone records that proved his claims of a non-existent relationship with Cantrell wasn’t true. Detectives had a hunch this was just the beginning of a tangled web of lies, with warrants stated his behavior was extremely suspicious based on the circumstances. When they confronted Dudley with this information and suspicions he did something to Cantrell, Dudley denied it-and then stopped answering all questions. From there it was technology that did all the talking and helped form a chilling timeline since August 25th, the day Cantrell was last seen alive, until now.

Dudley told detectives he started that morning at Costco before returning home to do some “spring cleaning” which already made detectives suspicious. But it was his next confirmed movements that were a huge piece of the puzzle. Just after 8 a.m., surveillance video showed Dudley’s truck pull into this parking garage at the Tacoma Dome Station. Warrants say he parked, took a bike out of the car, and rode off. Four hours later, a video showed Cantrell's white Mazda parked near the train station, being driven by a man wearing latex gloves that documents say fit Dudley’s description. The man in the video is seen walking towards the parking garage, and not long after, Dudley’s truck pulls out of the garage and drives away.

The video is a significant piece of evidence, as detectives know that Cantrell was still alive when Dudley’s truck was captured being parked in the garage around 8 a.m. A neighbor’s security footage also captured Cantrell's car leaving her Parkland neighborhood around 8:30 a.m., and records show Dudley sent her a text just before 9 a.m.

From there phone data records state Cantrell and Dudley’s phones were at his Tacoma home. About an hour and a half after she appeared to arrive, according to phone records, Dudley places a call to his home security company, ADT. Detectives note shortly after, he texted his wife the power was also temporarily out and said "don’t freak out if the ADT cams are down."

An hour later, Dudley’s phone shuts off, but Cantrell's doesn’t. The data shows it leaves Dudley’s home and travels to the train station where at the same time her car is dropped off. And when Dudley’s truck is captured leaving the train station not long after, records show her phone traveled with it. The phone's final destination point recorded was at 12:45 p.m. in an area similar with Owen Beach, where divers would later find it buried in sea kelp on the ocean floor.

About 45 minutes after investigators believe Cantrell's phone was thrown in  Puget Sound, Dudley’s phone turns back on and places him at his residence. He texts his wife at 2:30 p.m. seemingly about the security cameras being back on, and just prior, texting his employer asking about sealant, a substance used for sealing and filling gaps and cracks. Dudley mentions to his boss he’s doing work in his basement. One week later, FBI forensic technicians would search his home, detecting blood in various areas of the basement and also in his truck.

Though Dudley didn’t share much with investigators, it stood out when he told them he spent the same day Cantrell went missing doing “spring cleaning,” and the day after he said he used his employer’s dumpster to drop off “a bunch of trash.”

And while detectives believe Dudley deleted items off his phone before they could get to it, they found her phone number was in there, under the contact name Velma. Velma instantly made detectives think of an image they’d found on Dudley’s phone that shows a woman in an orange turtleneck, covering her face. Phone data showed the photo was taken in 2018, at Dudley’s residence.  It all came together for investigators when detectives got this image of Cantrell from her family, showing her dressed as the character Velma from "Scooby-Doo", wearing the same orange turtleneck. Furthermore, Cantrell's phone records showed she and Dudley were in touch several times a month for the last year. 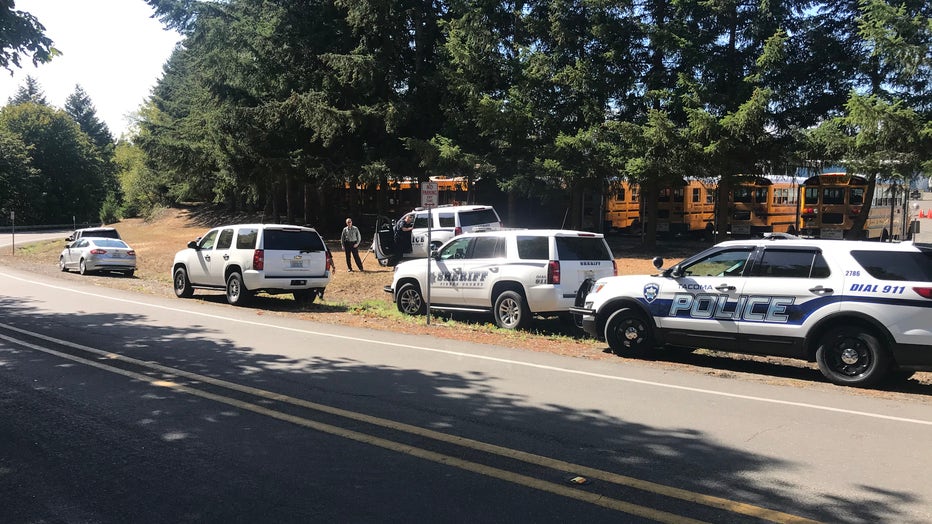 From day one of the investigation, Kassanndra Cantrell’s family really only had two pieces of solid information: her car was captured leaving her Parkland neighborhood around 8:30 a.m. on Tuesday, August 25th, and about four hours later her phone pinged for the last time near Point Defiance Park in Tacoma.

That is where the trail seemingly ended. Refusing to give up hope, her loved ones returned to the area last weekend going to businesses in the area and asking them to check surveillance video.

Family of missing pregnant woman Kassanndra Cantrell is organizing a search this weekend in the area where Cantrell's phone pinged for the last time.

“We need to see if they have anything that might show my daughter in the area,” Marie Smith told Q13 News.

Pierce County detectives continued searching for evidence around the clock.

Investigators said they were still waiting on lab results from a search done a few weeks ago at the home of an ex-boyfriend Cantrell dated more than a decade ago.

Detectives served the search warrant on Aug. 31 at a home near South K Street and 35th Street in Tacoma. Crews from the FBI's forensic team were investigating the home and a vehicle for evidence.

“Every sound, I imagine that I hear her, or a door, when I doze I have these little snippets of dreams and for a second I think everything is okay that everything got fixed but then I wake up and I realize that was a dream,” Smith told Q13 News earlier this month. “Being awake is the nightmare. All I want to do is dream, but I can’t sleep.”

If you have any information on Kassanndra Cantrell’s case, you are urged to contact the Pierce County Sheriff’s Department.