The House Jan. 6 committee said Sunday it will interview more former Cabinet secretaries and is prepared to subpoena conservative activist Virginia "Ginni" Thomas, who's married to Supreme Court Justice Clarence Thomas, as part of its investigation of the Capitol riot and Donald Trump's role.

Lawmakers said they are deepening their inquiry after a series of eight hearings in June and July culminating in a prime-time session Thursday, with plans to interview additional witnesses and reconvene in September to resume laying out their findings to the public.

Cheney, R-Wyo., did not identify the Trump administration officials who might come forward, but the committee has previously made clear its interest in speaking with those believed to have considered invoking a constitutional process in the 25th Amendment to remove Trump from office after the riot on Jan. 6, 2021, when hundreds of Trump’s supporters violently stormed the Capitol and interrupted the certification of Joe Biden’s election. 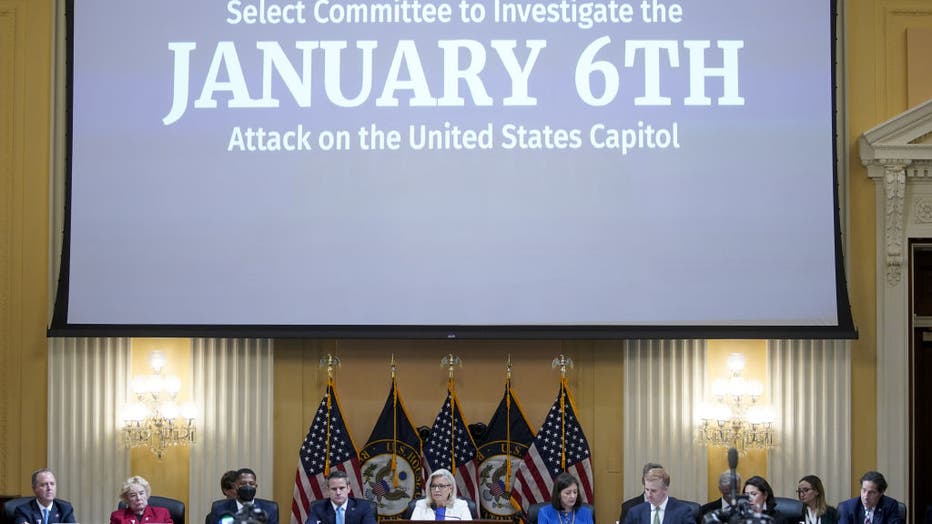 Representative Liz Cheney, a Republican from Wyoming, bottom center, speaks during a hearing of the Select Committee to Investigate the January 6th Attack on the US Capitol in Washington, D.C., US, on Thursday, July 21, 2022. Photographer: Al Drago/B

Other Cabinet members have indicated they may have important details to share.

Betsy DeVos, the education secretary at the time, previously told USA Today that she raised with Vice President Mike Pence the question of whether the Cabinet should consider invoking the 25th Amendment, which would have required the vice president and the majority of the Cabinet to agree that the president could no longer fulfill his duties.

DeVos, in her resignation letter on Jan. 7, 2021, blamed Trump for inciting the mob. "There is no mistaking the impact your rhetoric had on the situation, and it is the inflection point for me," she wrote.

On the same day, Elaine Chao quit as transportation secretary. Chao, who is married to Senate GOP leader Mitch McConnell of Kentucky, said the attack had "deeply troubled me in a way that I simply cannot set aside."

Mike Pompeo, the secretary of state at the time who is considering a 2024 presidential run, and Steven Mnuchin, Trump's treasury secretary, also were reported to have discussed the possibility of invoking the 25th Amendment, according to Jonathan Karl of ABC News in his book "Betrayal."

"The floodgates have opened," said Rep. Elaine Luria, D-Va., regarding the next phase of its investigation.

Committee members also hope to learn more about Ginni Thomas’ own effort to keep Trump in office and the potential conflicts of interest for Clarence Thomas as a result on Jan. 6 cases that have come before the Supreme Court. The committee sent a letter to Ginni Thomas last month seeking an interview and hopes she will comply, Cheney said.

Thomas communicated with people in Trump’s orbit ahead of the 2021 attack and also on the day of the insurrection.

"We certainly hope that she will agree to come in voluntarily," Cheney said. "But the committee is fully prepared to contemplate a subpoena if she does not."

Cheney also said that while the committee hasn’t decided whether to make a criminal referral regarding Trump to the Justice Department, "that’s absolutely something we’re looking at."

Added Rep. Adam Kinzinger, R-Ill.: "I certainly think there’s evidence of crimes and I think it goes all the way up to Donald Trump."

Vice chair Rep. Liz Cheney, R-Wyo., outlined what the committee has learned about the events leading up to the Jan. 6 riot putting blame on former president Donald Trump for riling up insurrectionists.

While a possible Trump prosecution is a matter for the Justice Department, the committee has used its hearings to try to make a case about his political viability as he mulls running in 2024. Some of the most damning testimony aired by the committee has come from Trump’s own top Republican advisers, military leaders and confidants, who admitted to a loss of confidence in his judgment and dedication to the rule of law in the days leading up to and after the Jan. 6 attack.

The committee also wants to get to the bottom of missing Secret Service texts from Jan. 5-6, 2021, that could have shed further light on Trump’s actions during the insurrection, particularly after earlier testimony about his confrontation with security as he tried to join supporters at the Capitol.

Lawmakers also are interested in hearing from Steve Bannon, a Trump ally who was found guilty last week on criminal contempt of Congress charges for refusing to comply with the House committee’s subpoena.

Cheney spoke on CNN's "State of the Union" and "Fox News Sunday," Kinzinger appeared on ABC's "This Week," and Luria was on NBC's "Meet the Press."