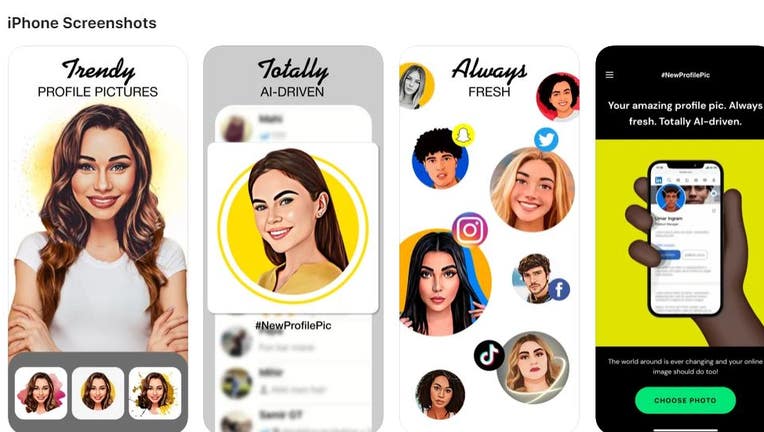 Screenshot from NewProfilePic on the Apple App Store

An app called "New Profile Pic" is quickly gaining popularity, but now users are asking if the app is a Russian malware scam. But are there any validity to those rumors?

In its description, "New Profile Pic" says the app "lets you change your user image style as often as you want. Dare to be different, with a profile pic that reflects your current mood or state of mind. Impress your friends on social media and keep them interested in what's coming next! ;)"

It says it creates a new picture for you based on one you upload upswing AI-driven cartoon portraits.

However, once the app gained popularity, many social users claimed the app was stealing users' data for criminal purposes. Another rumor claimed that your personal and financial data was going to Russia.

The rumors also escalated when the Daily Mail reported on the claim. The Daily Mail's post was flagged as part of Facebook’s efforts to combat false news and misinformation on its news feed.

According to Snopes, the site and app were initially registered in Russia, because its founder is Russian. However, he is not living in Russia at the moment and the address has been changed to avoid confusion.

Both Snopes and PolitiFact looked into "New Profile Pic's" privacy policy and found that it requested app permissions that are similar to mainstream apps. Neither app in the App Store for Apple or Google Play indicated that it accessed people's banking or contact information in the fine print, according to PolitiFact.

"We collect your name, email address, username, social network information and other information you provide when you register, set up an account, contact us by e-mail or use our services," according to Linerock Investment Ltd, the company that copyrights the group that develops the mobile app. "We may also obtain information from other companies and combine that with the information we collect on the Services."

Users’ photos аre stored in the Amаzon cloud, based in the US, аnd deleted two weeks аfter they аre uploаded, аccording to the compаny.

App creator and founder of Linerock Investment, Victor Sazhain, is from Russia and responded to the rumors:

"The war between Russia and Ukraine has been always unthinkable. And it should be again.

Our team has development offices in Moscow and Kiev, Novosibirsk and Odessa. Our iOS team is mostly Russian. Our Android team - mostly Ukrainian.

I personally was born in USSR in Moscow and moved to Krivyi Rih being two months old. Very literally my fatherland is Russia and my motherland is Ukraine.

With Moscow being my home and Kryvyi Rih being a beloved city of my childhood, I never would imagine discussing a matter of war between our nations.

It always was something unimaginable, like a war between US and Canada or France and Belgium. And now it became somewhat expected if you read the news.

Unfortunately the very possibility of such war is something that benefits many speakers. For Russian Government it is a leverage to get concessions from the West. For their Ukrainian counterparts - a leverage to get international financial aid. And for US and EU politicians it is a great subject to distract their people from their government’s failures.

Nobody really wants this war, nobody actually tries to make it happen. But constantly emphasising it being a possibility, they made the war not that unthinkable anymore. And this is the most dangerous thing. Probably the only thing that can make it possible.

The window of discourse is dangerously shifted, so let’s move it back where it belongs: That War is Unthinkable!"

Both PolitiFact and Snopes say the rumors are false and have not seen any evidence that the app is taking additional personal information and sending it to Russia for criminal use.