WASHINGTON (AP) — President Donald Trump on Tuesday said Kim Jong Un wants a historic, high-stakes meeting as soon as possible and suggested the North Korean dictator has been "very open" and "very honorable," a sharply different assessment of a leader he once denounced as "Little Rocket Man."

Trump's praise for Kim on Tuesday stood in stark contrast to his previous bellicose rhetoric toward the North Korean leader. Beyond dubbing him "Little Rocket Man" from the rostrum of the United Nations last fall, Trump has threatened to deliver "fire and fury" upon North Korea and taunted Kim on Twitter that his own nuclear "button" was larger than the one in Pyongyang.

Later Tuesday, Trump sidestepped a question as to why he would use the word "honorable" to describe Kim, who has been accused of starving his own people, executing his political opponents and ordering the killing of a member of his own family. 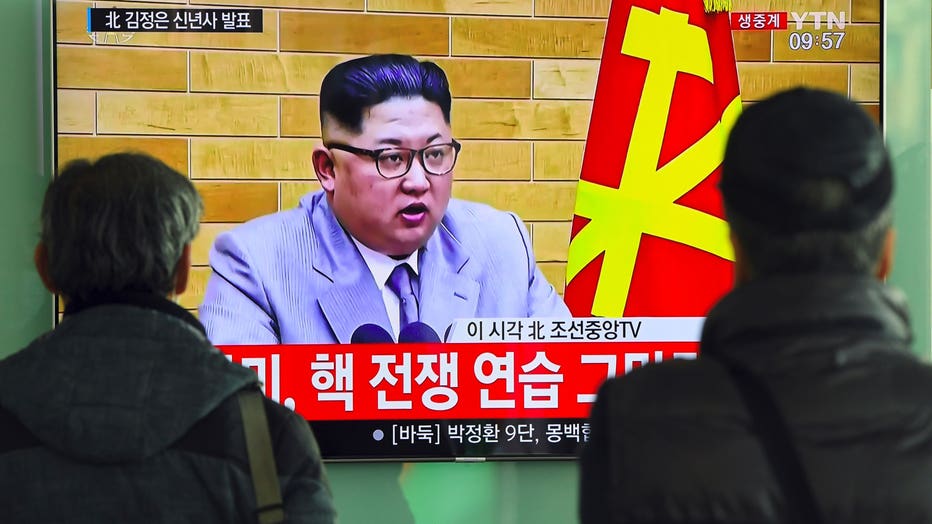 "We have been told directly that they would like to have the meeting as soon as possible. We think that's a great thing for the world," Trump said at the White House alongside French President Emmanuel Macron. "Kim Jong Un, he really has been very open and I think very honorable from everything we're seeing."

Trump cautioned that North Korea had not followed through on previous promises, but credited tough steps from his administration — including sanctions and organizing pressure from international allies — for having forced Pyongyang to hold talks. And he again suggested that he would "leave the table" if the negotiations were not productive or if North Korea was not operating in good faith.

"We'll see where that all goes," the president said. "Maybe it will be wonderful or maybe it won't."

Trump's comments came days after a flurry of moves from North Korea that the White House was anxious to promote as signs that its coercion campaign was working. On Saturday, North Korea announced it will close its nuclear testing facility and suspend nuclear and intercontinental ballistic missile tests — a move welcomed by Trump as "big progress."

However, the North stopped short of suggesting it will give up its nuclear weapons — as Trump suggested in a weekend tweet — or scale back its production of missiles and their related components. When pressed Tuesday on what he meant by the goal of "denuclearization," Trump said, "It means they get rid of their nukes. Very simple."

"It would be easy for me to make a simple deal and declare victory. I don't want to do that," the president said.

This week, U.S.-allied South Korean President Moon Jae-in and Kim will hold a summit in the Demilitarized Zone between the Koreas that could lay the ground for Trump's planned meeting with the North Korean dictator. The leaders of the U.S. and North Korea have never met during six decades of hostility since the Korean War.

The exact date and location of the possible summit has not been determined.

As diplomacy gathered pace, White House officials and congressional aides said the Trump administration was considering nominating Adm. Harry Harris, the commander of U.S. forces in the Pacific, as ambassador to South Korea. That key position has been vacant since Trump took office 15 months ago.

It would entail a shuffle in the administration's plans for key diplomatic assignments. Harris has already been nominated to be ambassador to Australia. His Senate confirmation hearing for the Australia position had been due to take place Tuesday but was postponed.

One of the congressional aides said both the State Department and governments in both Australia and South Korea were informed that the administration is looking at a switch of postings for Harris, although nothing has been made official yet. The aide and other officials requested anonymity to discuss the plans as they were not authorized to discuss them.

CIA Director Mike Pompeo, who is Trump's choice for secretary of state, told his own confirmation hearing this month that the vacancy in Seoul needed "immediate attention." The man earlier tipped for the post, Korea expert Victor Cha, was passed over in January. He later voiced concern the administration was considering military action against North Korea.

Harris has spent nearly 40 years in uniform and has a reputation as a straight talker. In testimony last month before the Senate Armed Services Committee, Harris said that the U.S. could not be "overly optimistic" about outcomes for the planned Trump-Kim summit. "We have to go into this, eyes wide open," he told lawmakers.

Last year, the U.S. spearheaded through the U.N. Security Council the toughest international sanctions yet against North Korea in response to three long-range missile launches and its most powerful nuclear test explosion yet. The Trump administration supplemented those restrictions with unilateral U.S. sanctions against firms that had conducted illicit trade with the North.

This year, Kim has pivoted from confrontation to diplomacy and, according to South Korea and China, has expressed a commitment to denuclearization. There is still uncertainty about what he seeks in return.