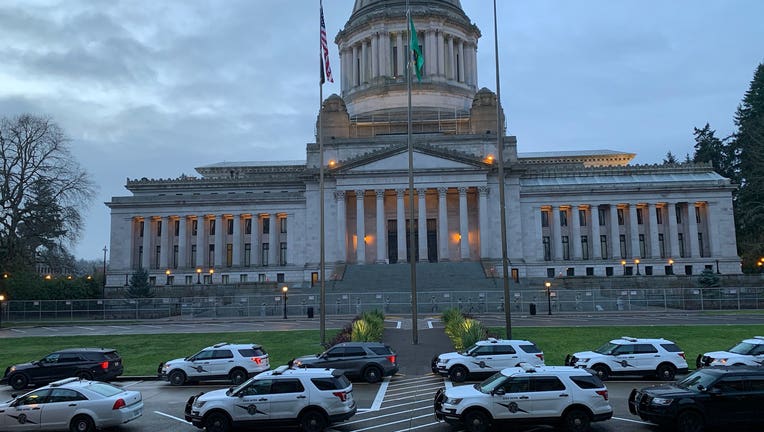 OLYMPIA, Wash. - Gov. Jay Inslee on Tuesday night said the Washington National Guard would continue to support security efforts at the Capitol at least through Inauguration Day "due to evolving intelligence on security threats" posed in all 50 state Capitols.

Washington state’s Legislature convened Monday amid a heightened security presence due to concerns about armed groups who might try to disrupt the proceedings. At least two people were arrested. A right-wing militia had encouraged its members to occupy the Capitol before calling it off.

There are new security perimeters and challenges during legislative sessions due to the Capitol riots last week.

Capitol campus buildings are closed to the public because of the coronavirus pandemic.

"These unfortunate, necessary security precautions could last longer, but we are hopeful that we will soon see political temperatures cool and threat levels come down, bringing a related easing of these restrictions," Inslee said in an emailed statement.

Last Wednesday, people broke a gate outside the governor’s mansion and made it to the porch and front yard. That breach came hours after the pro-Trump siege of the nation’s Capitol building in Washington, D.C.

Inslee said many roads and trails also will continue to be closed so people can peacefully assemble in non-restricted areas without the concern of vehicles impacting their activity while also allowing for emergency vehicle access.

"Law enforcement remains present to help ensure that all sides have the opportunity to legally exercise their free speech rights and peaceably assemble in non-restricted areas," he said.