Four shootings in three days throughout downtown districts of Seattle

In the last three days, there have been four shootings in Seattle, all near the downtown districts of the city.

SEATTLE - In the last three days, there have been four shootings in Seattle, all near the downtown districts of the city.

On Friday, Seattle Police say a suspect shot an employee during a robbery at Key Bank in the SODO District. It happened around 1 p.m. on the 1900 block of 1st Avenue South.

First responders raced the 34-year-old victim to the hospital. Police say the victim is in stable condition.

However, the suspect got away.

"It’s pretty startling. They [police] don’t have any pictures of the person or anything for me to alert my staff, like, to keep an eye out, to sort of help. And knowing that they are out there, is kind of scary," said Ashlee Nolan.

Nolan is the operations manager for Paseo, a restaurant a few feet from the shooting. She says driving into work and seeing the police activity is frightening, but not surprising.

Crime rates in Seattle are continuing to rise. Statistics show 2021 saw a 40% increase in shootings. City officials say it is at an all-time high.

This week has been especially violent. Seattle had four shootings in three days.

The most recent incident is this Friday’s bank robbery shooting.

In total, since Feb. 4, there have been seven shootings in the city. One of them was fatal. 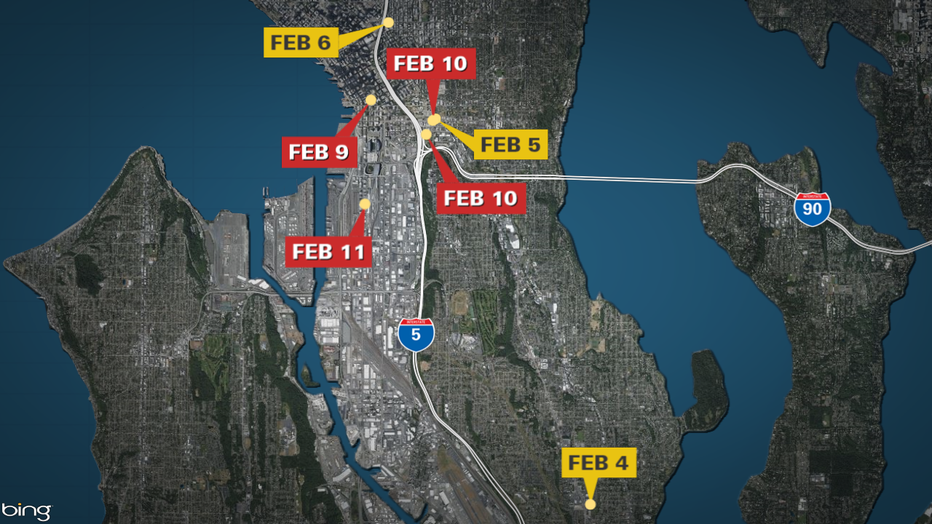 FOX 13 News reached out to new Seattle City Mayor Bruce Harrell about this crime trend. His office provided a statement that reads in part:

"One of Mayor Harrell's first hires was a gun violence prevention liaison. Together, they are working directly with those impacted on community-based solutions, striving to prevent gun violence before it begins. He continues to advocate for improved staffing at SPD that allows for swift responses during emergencies and thorough investigations when gun violence does occur. Finally, he supports pilot programs for new technologies and is pushing for further regional coordination and legislative change in Olympia that allows the City to pursue innovative new laws to address this crisis."

For people working in these areas affected by crime, like Nolan, she believes it will take the entire community to fix this problem.

The suspect in this bank robbery is still on the loose and believed to be armed and dangerous. Police have not released any details about the suspect. They ask anyone with information to call 911.