Nearly two years ago, an Amtrak train flew off the tracks going more than double the speed limit around a dangerous curve.

DUPONT, Wash. -- On Tuesday, Amtrak will face the first set of victims to take it to court in the deadly DuPont train derailment.

Nearly two years ago, an Amtrak train flew off the tracks going more than double the speed limit around a dangerous curve. The crash killed three people and injured 65 others on the train and on Interstate 5 below.

Seattle's Luvera Law Firm is representing three victims in this jury trial, two who were on the train when it derailed and one who was in a truck when a railcar crashed down from the overpass. The trial will be held in U.S. District Court in Tacoma. 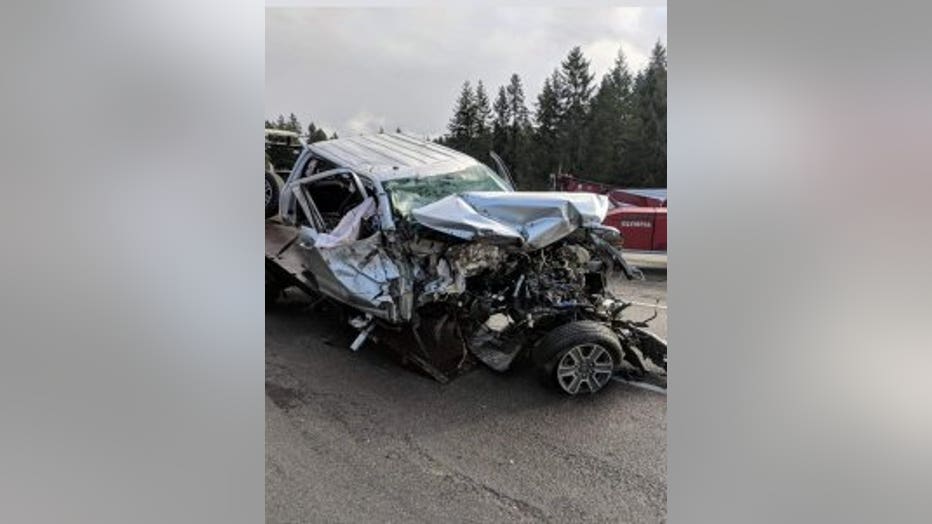 This truck was crushed on I-5 when an Amtrak train derailed in Dupont, Washington, in 2017.

According to the National Transportation Safety Board investigation -- which wrapped earlier this year -- the engineer failed to see the sign to slow down on the first-ever passenger trip on this route. He took the problematic turn at 78 miles per hour when the speed limit was 30.

"It's all too easy to blame it on individuals but this was an institutional problem and it involved a number of institutions, Amtrak first and foremost," attorney David Beninger told Q13 News after the investigation ended in May. Beninger is representing the three victims in this trial.

The NTSB investigation also did not blame the engineer, who investigators say was set up to fail. Instead, it blamed multiple agencies, including Amtrak, the defendant in this trial.

In a statement given to Q13 News Monday night, Beninger said, "Through our comprehensive discovery process, we’ve been able to uncover overwhelming evidence that the DuPont Amtrak derailment was not an accident, but an accident waiting to happen. The depth of Amtrak’s institutional failures is astonishing and worrisome."

According to his attorneys, one of the train passenger victims, Aaron Harris, "suffered a traumatic brain injury, as well as vertebrae and rib fractures, and spent about 10 days in the intensive care and acute care units at Harborview Medical Center."

The third victim in the trial, Blaine Wilmotte, was a passenger in a truck on I-5 when one of the derailed cars crashed onto that truck. According to the lawsuit, he had multiple fractures, physical impairment and emotional trauma. His wife is also listed on the lawsuit.

The victims are seeking damages for their injuries, both physical and emotional. Attorneys for the plaintiffs argue Amtrak was negligent: That it knew how to prevent an accident like this, with positive train control and other factors, but put passengers on the train without the necessary safety measures in place.

Beninger is also challenging Amtrak's claim that it has paid all past medical bills and expenses for the victims.