The Governor will be discussing the impact the climate crisis has had on the state and its residents, including the record heatwave and wildfire season.

The cities of Seattle, Tacoma and Everett areas are not included in the declaration, with the governor’s office saying that those areas have enough water storage to get through the summer.

A drought emergency declaration is issued when water supply is projected to be below 75% of average, and poses a hardship to water users and the environment. The declaration allows expedited emergency water right permitting and allows the state to aid state agriculture, protect public water supplies and boost stream flows to safeguard fish.

A drought advisory was issued for most of the state in May after one of the driest springs on record, followed by a record-breaking heatwave at the end of June. 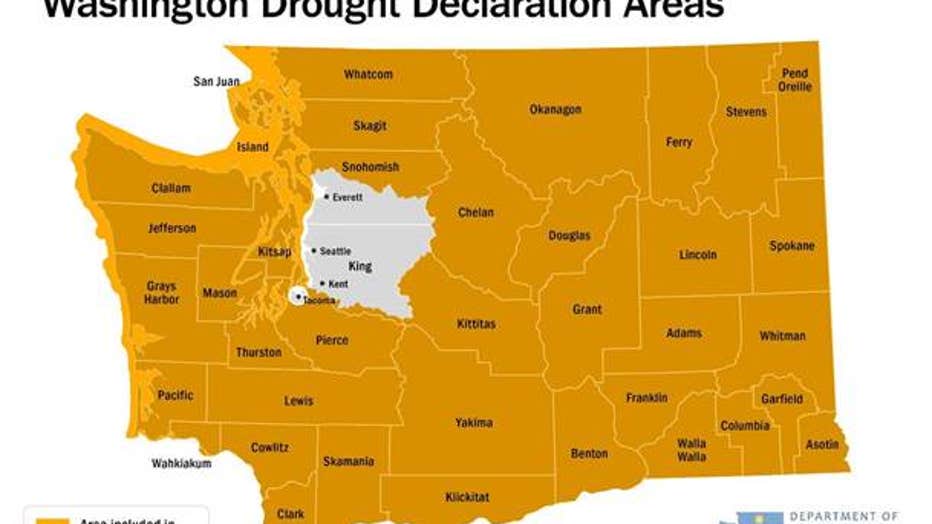 Last week, Inslee declared a state of emergency throughout Washington relating to the growing risk of wildfires, including a statewide prohibition on most outdoor and agricultural burning through Sept. 30.

Nearly 60% of the U.S. West is considered in exceptional or extreme drought, the two highest categories, according to the University of Nebraska’s Drought Monitor. That’s the highest percentage in the 20 years the drought monitor has been keeping track. Less than 1% of the West is not in drought or considered abnormally dry, also a record.

More than 95% of Washington is either abnormally dry or in official drought with 52.7% of the state being in severe, extreme or exceptional drought, according to the U.S. Drought monitor.

Rain and snow in Washington from April to June was third lowest in 127 years of recordkeeping with only 3.7 inches, according to the National Oceanic and Atmospheric Administration.

Both NOAA and NASA show soil moisture levels down to some of the lowest recorded levels for much of the West. Most of California, Oregon, Washington, Nevada, Arizona, Utah and Idaho are drier than in 99% of other years.