The invasive species that you know as the "murder hornet" or the "Asian giant hornet" now has a new name.

OLYMPIA, Wash. - The invasive insects are native to Asia and have been the target of eradication efforts in the state since they were first discovered there less than four years ago.

Often referred to as the Asian giant hornet since its introduction in North America became widely known in 2020, the insect recently adopted its common name as the northern giant hornet by the Entomological Society of America.

They are considered the world’s largest hornet and prey on honeybees. 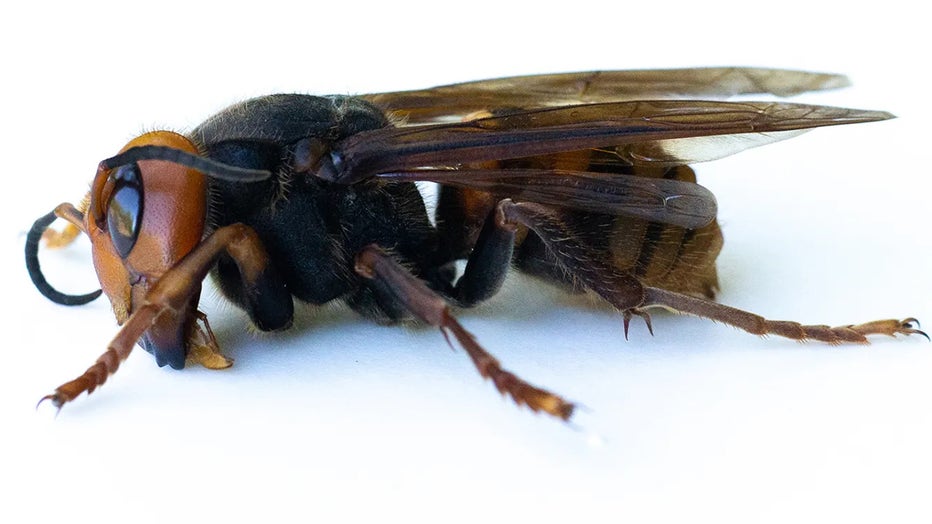 A sample specimen of a dead Asian giant hornet from Japan, also known as a Northern giant hornet, is shown on July 29, 2020 in Bellingham, Washington. (Karen Ducey / Getty Images)

"Just a handful of hornets can wipe out an entire honeybee hive in a matter of hours. That’s like tens of thousands of bees," said Karla Salp, acting communications director for the Washington State Department of Agriculture. "They come in, decapitate the bees, leave the bodies for dead, and then the hornets go in and occupy the honeybee hive and take out the honeybee brood to feed their own young back at the hornet’s nest."

The northern giant hornet was first detected in the U.S. in December 2019 in Whatcom County, Washington. Since then, the Washington State Department of Agriculture has been working with local, state and federal partners to find and eradicate the hornets and prevent them from establishing in the U.S. 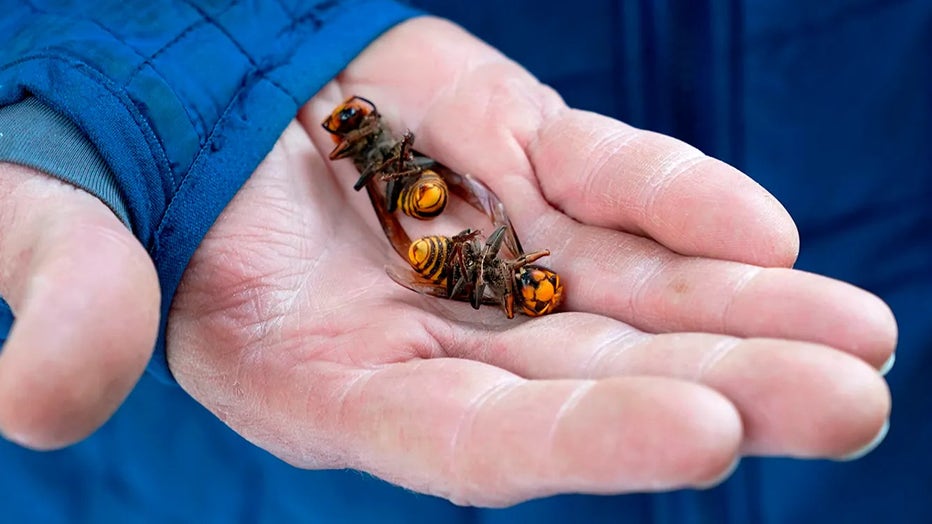 A Washington State Department of Agriculture worker holds two of the dozens of Asian giant hornets vacuumed from a tree on October 24, 2020, in Blaine, Washington. (Elaine Thompson / Getty Images)

State entomologists have eradicated four northern giant hornet nests since they were first discovered, and technology has been a big piece of how scientists have responded since the invasive species’ introduction.

Scientists initially started attaching a Bluetooth tracking device to trapped hornets. The data transmitted from the device would help researchers locate hives by following their flight path. However, the battery life was an issue, and it did not have a very long-range capability.

"But we found out that these are big hornets and don’t always fly fast. But when they want to, they can make good time and fly a lot faster than we can follow them, especially on the ground through blackberry vines and forest areas," Salp said. 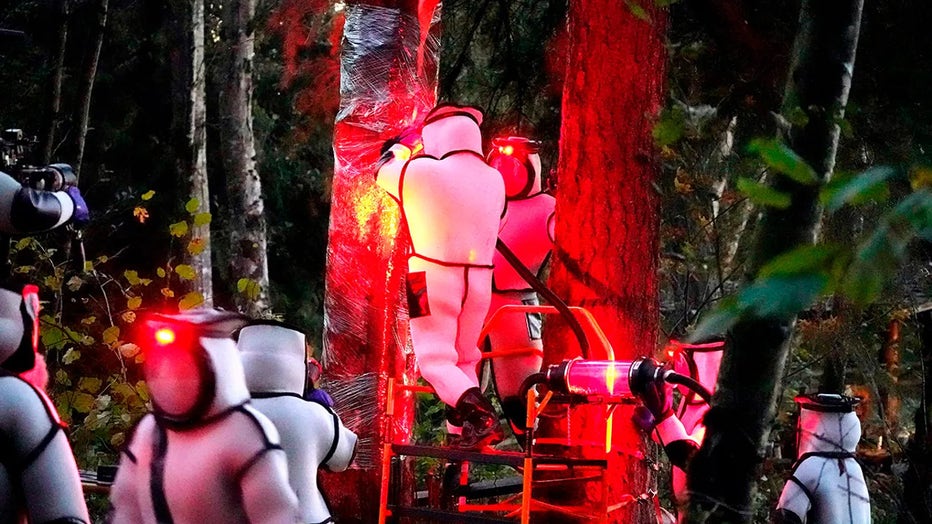 Scientists then switched to a more miniature radio tracker that provided a much longer battery life of up to two weeks instead of 12 hours from past technology.

"It can also be detected from much further away. That’s how we actually detected all four nests that we’ve eradicated," Salp said.

But those working in the field still have the problem of being unable to keep up with the hornet due to underbrush in the forest where they nest. 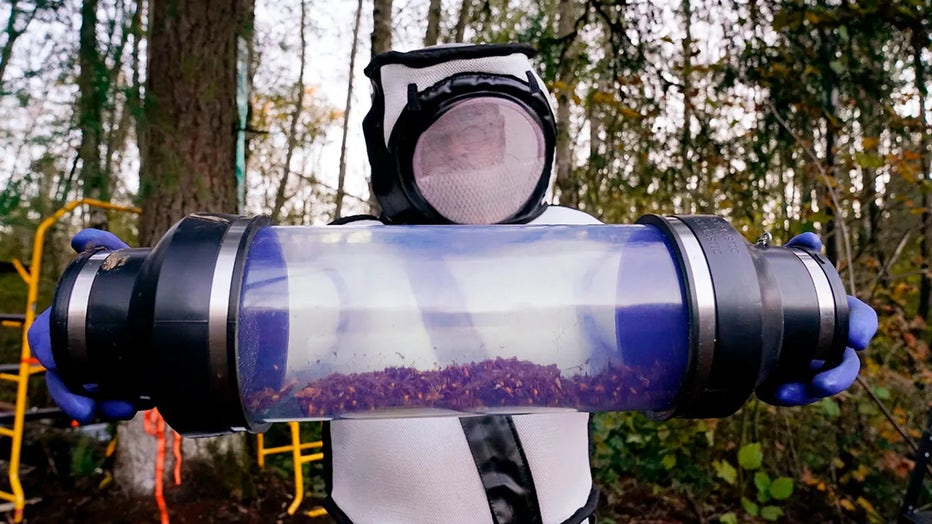 Sven Spichiger, Washington State Department of Agriculture managing entomologist, displays a canister of Asian giant hornets vacuumed from a nest in a tree behind him on October 24, 2020, in Blaine, Washington. (Elaine Thompson / Getty Images)

"It’s also a bit dangerous for our staff because you’re following with the receiver, trying to locate where these hornets are," Salp said. "And the closer you get, the more likely you are to stumble into unintentionally a hornet’s nest, which could be a very bad situation that we like to avoid."

And while nothing like that has happened so far, Salp said they are hoping to place a receiver on a drone and fly it over an area that would be able to enable them to move more quickly and safely to track the hornets down than we have been able to in the past.

"It’s a lot easier to fly over the tree canopy and look for the signal that way as opposed to tramping through the forest," Salp said.

Salp said this type of drone technology has never been used to track hornets and is usually used for larger animals like birds or more extensive kinds of insects.

Trapping season starts July 1 and goes through the end of November. 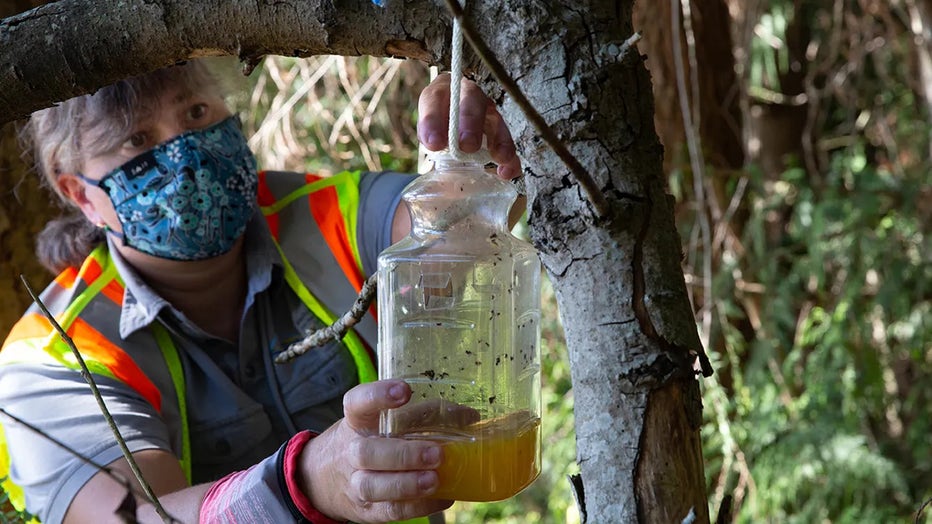 "They’re really large insects and extremely hardy. The first report that we had was of we had one dead specimen, but they also reported another one that flew off into the woods. And that was in December, which is much later than most insects are flying around Northwest Washington," Salp said.

And the public is making a difference in the state’s efforts to eradicate the hornet.

Over half of the state’s confirmed sightings were provided by the public, according to Salp. The initial detection of the hornet that led to finding three of the four nests in the state was also reported by private citizens.

"Their efforts for keeping their eyes open, reporting suspected sightings, taking those photos, reporting and trapping … are all ways that people can take concrete steps to help in this project to eradicate Asian giant hornets," Salp said.

And without the public's efforts into this, Salp said they would not be nearly as successful as they have been so far.