CUSTER, Wash. -- A dead Asian Giant Hornet found in Whatcom County is the first confirmed sighting of the honeybee killer this year. 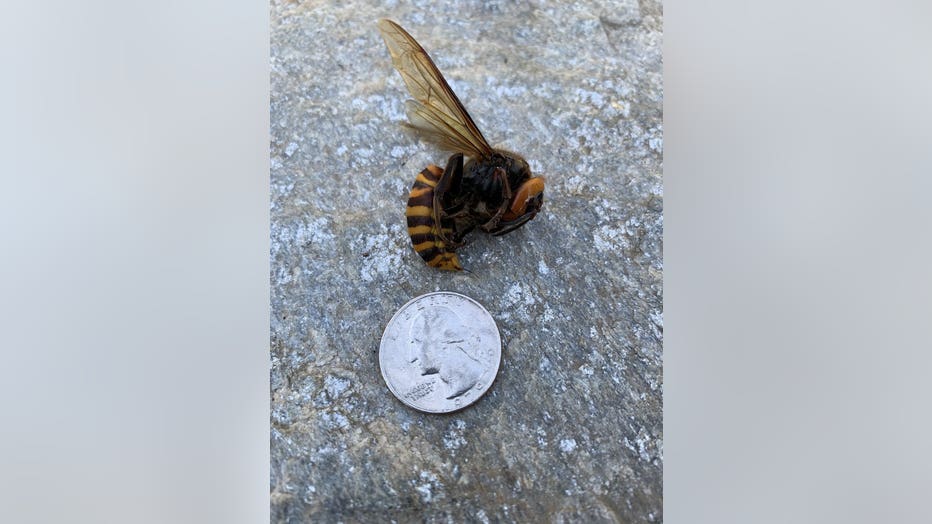 According to the state Department of Agriculture, a resident near Custer found the dead insect while walking on a roadway. The resident submitted a photo and report through the state's Hornet Watch Report Form.

The hornet was found near the location of a suspected Asian giant hornet bee kill in 2019. WSDA had already planned trapping in the area and will maintain that plan to try to find any colony that may be there.

“At this time, there is no evidence that Asian giant hornets are established in Washington State or anywhere else in the United States,” said Osama El-Lissy, Deputy Administrator, for USDA/APHIS’ Plant Protection and Quarantine program.

The first find of the year in the United States comes just days after the British Columbian government confirmed their first detection of the year in Canada near Langley, B.C. That specimen was initially reported to authorities on May 15.

The hornets are not known to bother people or pets, but they will attack if they feel threatened. It is not known how they got here, but entomologists say the most likely cause if from a cargo ship between Asia and North America. WSDA is urging the public to report any sightings.

Here is a description of an Asian Giant Hornet from the WSDA:
- 1.5 to 2 inches long
- Large orange/yellow head with prominent eyes
- Black and yellow striped abdomen
- Forms large colonies that usually nest in the ground

Back in April, the WSDA set up 60 sap traps in Whatcom County to attract queens that emerge in the spring to feed on sap. This summer, it will set up traps in 330 more sites.

The WSDA is also asking beekeepers and residents to set up bottle traps using an experimental lure of orange juice and rice cooking wine, particularly in Whatcom, Skagit, Island, San Juan, Jefferson, and Clallum counties at the beginning of July and keep them up through October.

The hope is for the traps to identify hornet nests so they can be eradicated.

The worlds largest hornet, which has an appetite for honey bees, has been found in Washington state, where entomologists were making plans to wipe it out. The hornet was sighted for the first time in the U.S. last December, when the state Department of Agriculture verified two reports near Blaine, Washington, close to the Canadian border. It also received two probable, but unconfirmed reports from sites in Custer, Washington, south of Blaine.