Experts say the dramatic absence of the southern resident orcas is likely directly tied to tanking salmon returns in the Fraser River, which were historically abundant.&nbsp;

SEATTLE - Summer is synonymous with seeing whales in the Pacific Northwest, but visits from the locally-beloved southern resident orcas are becoming few and far between. Experts say the dramatic absence is likely directly tied to tanking salmon returns in the Fraser River, which were historically abundant.

This spring and summer, the visits from the southern resident orca pods have been scarce. Friedman said J pod has not been seen in Washington’s inland waters since early April, and portions of K and L pods have made only quick trips inland in recent weeks.

“They were known as residents because people expected to see them from about mid-May through October here, but now that’s just not the case,” said Deborah Giles, an orca research scientist for University of Washington’s Center for Conservation Biology.

So far this summer, fractured pods are making sporadic appearances inland, some visits lasting less than a day. 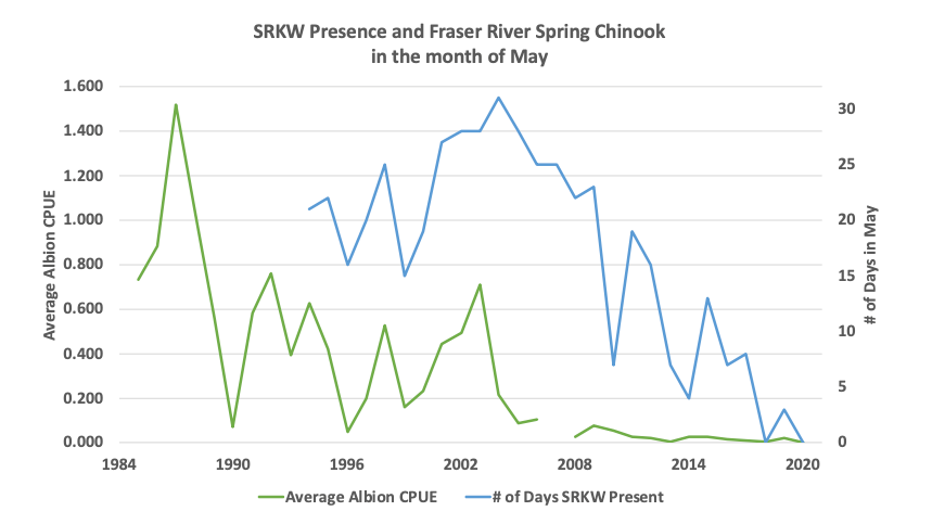 Data compiled by the Orca Behavior Institute and Pacific Whale Watch Association show how the presence of southern resident orcas in May has declined over the years with the decline of Fraser River Chinook salmon.

The family-oriented, highly-social southern residents are now mostly spread out on the coast. The endangered species struggles from lack of prey and diminished Chinook salmon returns in inland waters is not just anecdotal. This year, it’s statistically unprecedented.

Chinook salmon from British Columbia’s Fraser River is a main draw for southern resident orcas in spring and summer. The Albion test fishery has been tracking returns there since 1981.

Friedman and Giles said for the first May on record, the test fishery caught zero Chinook salmon. In June, nets caught just four. In total for 2020, seven Chinook salmon have been caught. Historically, there would be hundreds by now.

“With the loss of salmon it means we have an ecosystem out of balance,” Giles said. 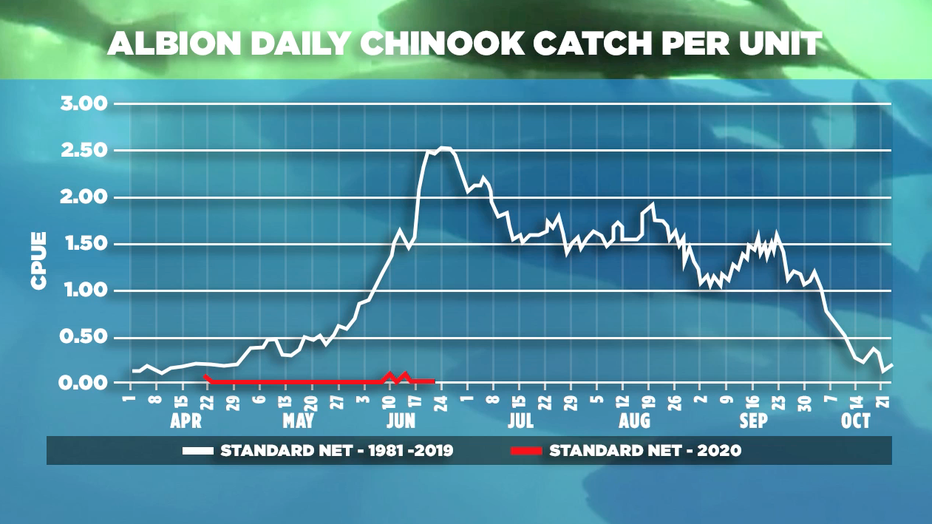 As of July 2, 2020, seven Chinook salmon have been caught by nets at the Albion test fishery on the Fraser River. Ten years ago, more than 300 were caught by now.

An ecosystem out of balance means the southern resident orcas are mostly out of sight from the waters they called home for thousands of years.

“If Ken Balcomb were doing those studies today, the transients [orcas] would be residents,” Friedman said. “We’re seeing them year round, they’re healthy, their population is growing and they have abundant food supply of seals and sea lions. And the residents would be called transients because we just don’t see them that often.”

The trend will worsen without significant investment in habitat restoration and conservation, Giles said.