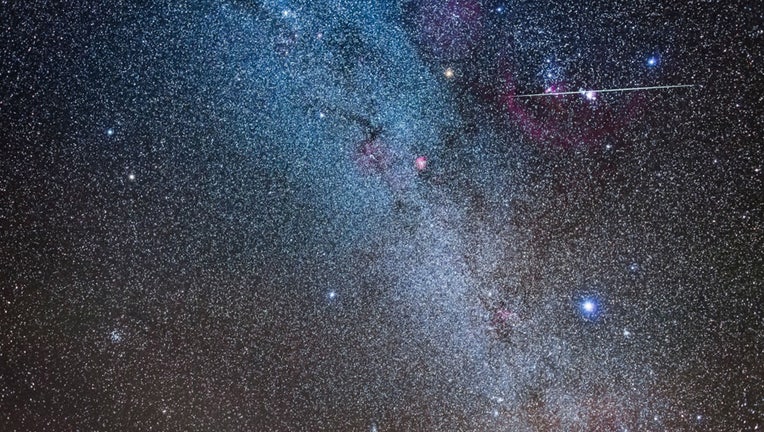 Calling all skywatchers! The 2023 celestial calendar is chock-full of events that will give you plenty of reasons to point your eyes skyward.

Here’s what’s on the space events calendar this year that can be witnessed from parts of the United States.

The Quadrantids meteor shower will make a visit in the Earth’s skies on Jan. 3 and Jan. 4 but will peak on Jan. 4.

The best times to view this meteor shower will be late at night on Jan. 3 or dawn on Jan. 4. when there’s still moonlight, according to Earthysky.org.

You might also be able to catch a few lights streaking through the night sky if you try looking during an hour or so of true darkness, after moonset, or shortly before dawn on Jan. 4.

"Under a dark sky with no moon, when the radiant is high in the sky, the Quadrantids can produce over 100 meteors per hour," Earthsky.org said.

Conjunction of Venus and Saturn 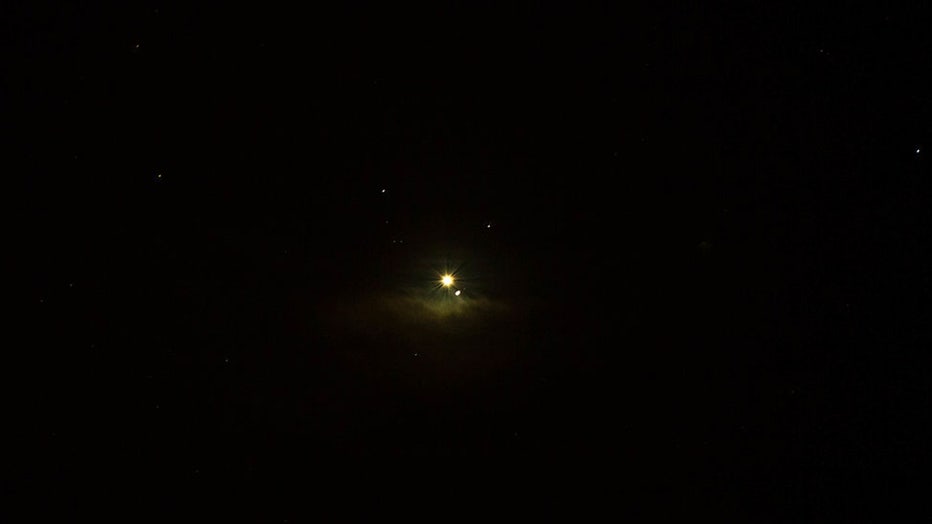 FILE - Venus and Saturn are seen over the night sky near the town of Varna, Bulgaria, Jan. 9, 2016. (NurPhoto/NurPhoto via Getty Images)

Venus will be shining brightly in the twilight sky on this night and Saturn will appear only one degree below it, according to the Adler Planetarium’s blog.

Looking through binoculars, the planets will appear less than a quarter of a degree apart.

Mercury is the star of the sky for the month of January.

Mercury will experience its greatest elongation, meaning it’ll be furthest away from our sunrise in the sky, according to Earthsky.org.

This might sound like it’ll be harder to spot the tiny planet, but it’s actually the best time to look out for Mercury as it won’t get lost in the glare of our sunrise or sunset. ]

"This is the best time to view Mercury since it will be at its highest point above the horizon in the morning sky. Look for the planet low in the eastern sky just before sunrise," according to Seasky.org.

Viewing Mercury will continue to be easier into February, however, it will start edging closer toward the sunrise. But, you can still spot the planet during the morning twilight.

Conjunction of moon and Jupiter with Venus in sight

The moon and Jupiter will appear near and dear to each other in the night sky and Venus won’t be far away either.

As soon as the sun sets on the southwestern horizon on Feb. 22, the crescent moon and Jupiter will appear clearly enough to be seen through binoculars, according to Inthesky.org.

Venus will also be close by and should be positioned just beneath the moon and Jupiter, according to National Geographic.

Conjunction of Jupiter and Venus 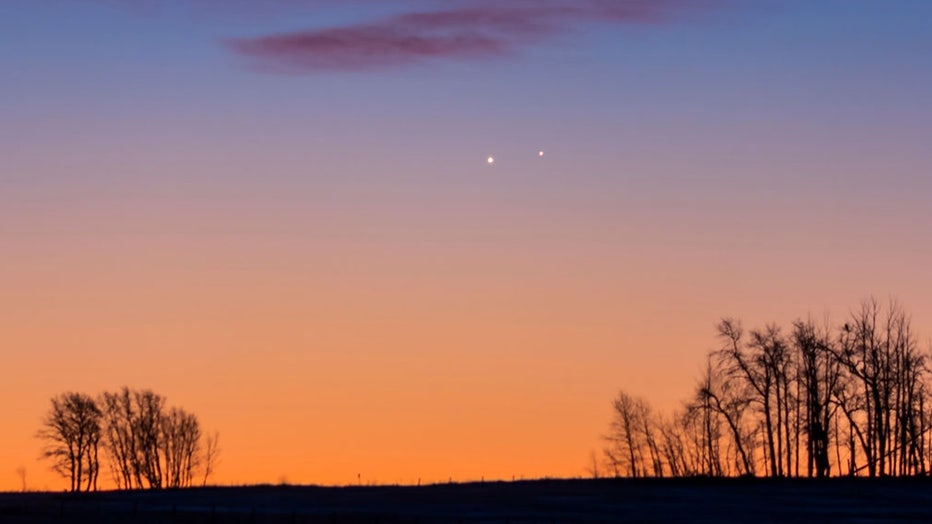 This is sort of a continuation of what took place on Feb. 22.

Jupiter and Venus will make their closest approach — at least from our view on planet Earth — passing within half a degree from each other, according to National Geographic.

You can best catch this conjunction as the sun sets.

Although the Lyrid meteor shower begins on April 15, the peak light show is expected late evening on April 21 and into April 23, according to the American Meteor Society.

"And the peak of the Lyrids is narrow (no weeks-long stretches of meteor-watching, as with some showers)," Earthsky.org said. 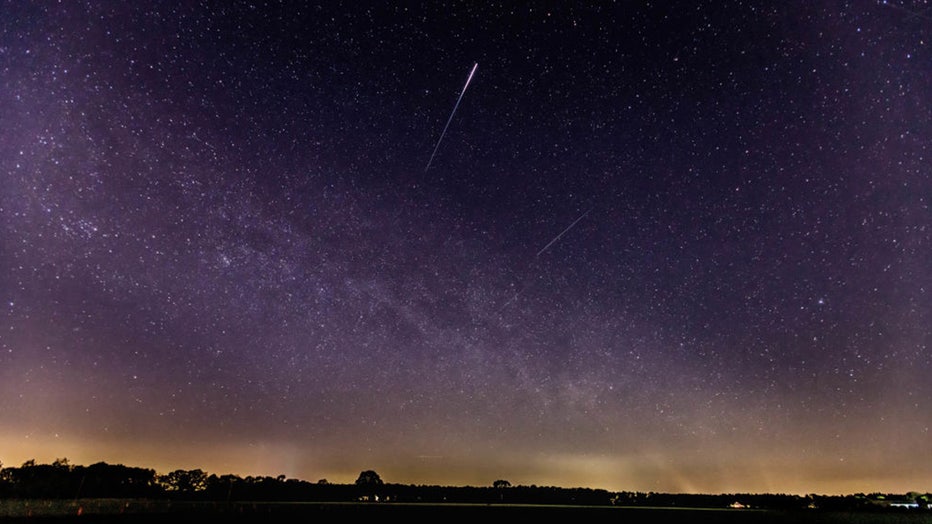 FILE - Lyrid shower: A meteor streaking across the sky is seen on April 22, 2020, in Schermbeck, Germany.  (Mario Hommes/DeFodi Images via Getty Images)

Halley’s Comet is back at it again and bringing Earthlings the always radiant Eta Aquariids shower.

The peak nights to watch the sky light up is the evening of May 5 and into May 6 and May 7, according to the American Meteor Society.

Also, no equipment is needed to view this shower from the ground, but you’ll definitely want to find a particularly dark spot to get the best views.

Look toward the constellation Aquarius to catch the light show.

On this night, you’ll be able to see our neighbor planet, Venus, as it will read its greatest eastern elongation. This means it will be furthest away from our horizon when the sun sets, so it will shine brightly in the sky.

"Look in the sunset direction, while the sky is darkening. You can’t miss Venus as the very bright evening ‘star,’" according to Earthsky.org.

What’s special about this particular meteor shower is that it’ll happen during the day.

It’s one of the most active daytime meteor showers, according to Earthsky.org.

"Watch for them in the sunrise direction in the dark hour before dawn breaks," Earthysky.org suggests. 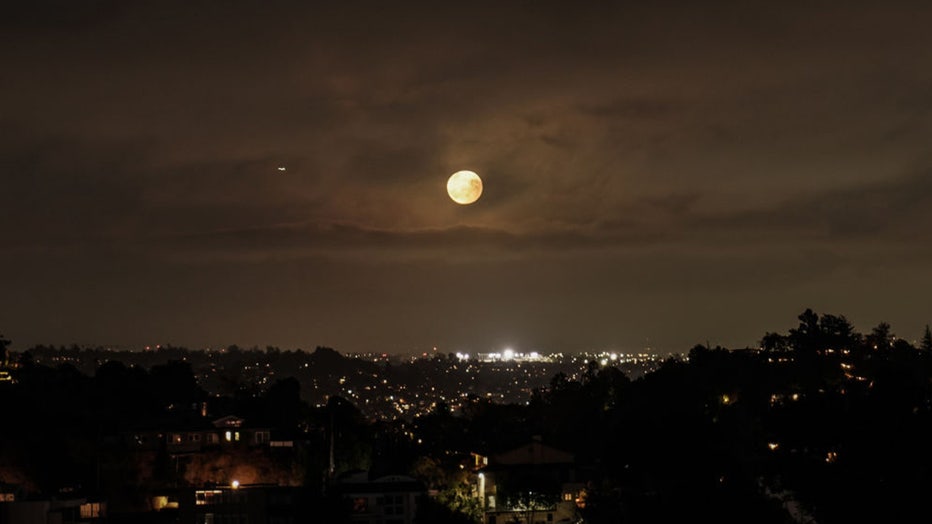 FILE - The Supermoon rises above the Hollywood Hills in Los Angeles, California, on July 14, 2022.  (Emily Molli/Anadolu Agency via Getty Images)

This supermoon is actually the first of four supermoons this year, according to Seasky.org.

A moon is considered a supermoon when it's full or new, and when its orbit is closest to the Earth.

July’s full supermoon is called the Buck moon because usually, male deer (bucks) antlers are starting to grow in, according to the Almanac.

The reason for the name is because during this time of the year "giant sturgeon of the Great Lakes and Lake Champlain were most readily caught," the Almanac’s website reads.

The predicted peak of this meteor shower will be on August 13 when the moon is in its waning crescent phase, according to the American Meteor Society. 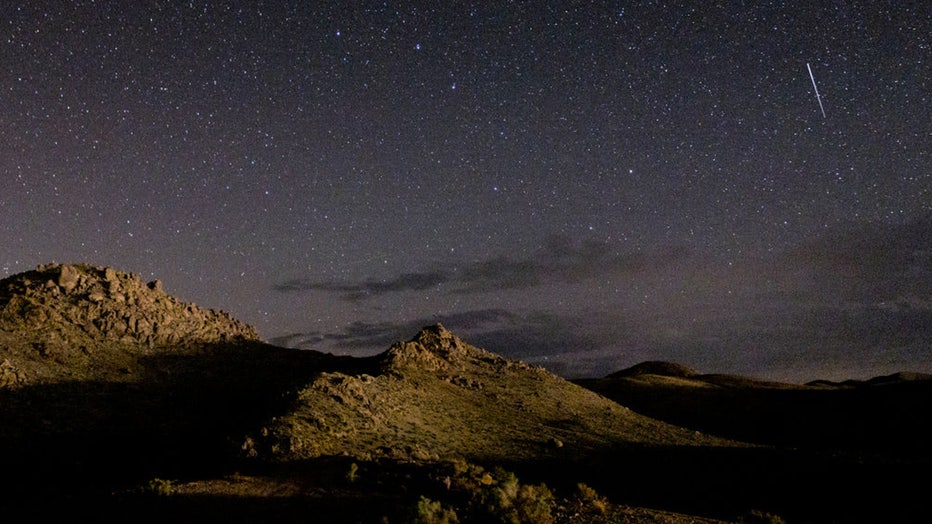 FILE - A meteor steaks across the sky over the Alabama Hills, near the eastern Sierras, during the annual Perseid meteor shower on August 20, 2022, near Lone Pine, California.  (David McNew/Getty Images)

It’s best to look for meteors before dawn, Earthsky suggests.

"Under a dark sky with no moon, skywatchers frequently report 90 meteors per hour, or more. In 2023, the waning crescent moon will not interfere with the meteor shower," Earthsky.org reads.

On this night, the moon will appear bigger and brighter than ever and will make one of its closest approaches to Earth.

"‘Blue Moon’ has become a popular term for the second Full Moon in a month; the name arose because of a Depression-era mistake in an astronomy magazine," according to the Almanac.

The last of four supermoons for 2023, September’s supermoon is dubbed the Harvest moon.

"The full Moon that happens nearest to the fall equinox (Sept. 22 or 23) always takes on the name ‘Harvest Moon,’" the Almanac says.

Beginning the evening of Oct. 8, the Draconids meteor shower is best viewed in the darkness just before morning on Oct. 9, according to Earthsky.org.

This meteor shower is known to only produce a handful of meteors per hour most years but, for any avid skywatchers, this is still worth a watch.

"In rare instances, fiery Draco has been known to spew forth many hundreds of meteors in a single hour," Earthsky.org says.

The sun, moon and Earth will almost perfectly align on Oct. 14.

This celestial event will result in a partial solar eclipse across the United States, according to NASA. 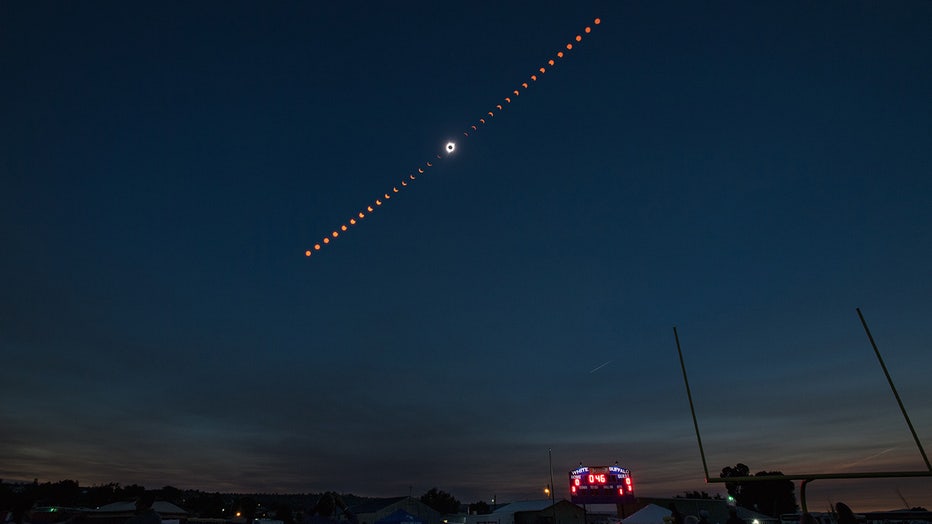 FILE - This composite image shows the progression of a total solar eclipse over Madras, Oregon, on Monday, Aug. 21, 2017. (NASA/Aubrey Gemignani)

The partial eclipse will begin from the coast of Oregon to the Texas Gulf Coast.

"Weather permitting, the annular eclipse will be visible in Oregon, Nevada, Utah, New Mexico, and Texas, as well as some parts of California, Idaho, Colorado, and Arizona," NASA says.

Skywatchers can potentially see meteors from the Orionids shower just before dawn on Oct. 21 and 22, according to Seasky.org.

The Orionids is categorized as an "average" meteor shower, producing up to 20 meteors per hour at its peak.

Look for the Orion constellation after midnight.

The predicted peak time to see any meteors during the Leonids shower is the night of Nov. 17 into dawn on Nov. 18, according to the American Meteor Society.

Look toward the Leo constellation after midnight for the best viewing potential, Seasky.org advises.

"Under a dark sky with no moon, you might see 10 to 15 Leonid meteors per hour," according to EarthSky.org.

You’ll probably catch your best glimpse of these meteors at around 2 a.m. (which is late but it could be worth it).

They peak between Dec. 13 and 14, the American Meteor Society says.

"Under a dark sky with no moon, you might catch 120 Geminid meteors per hour," Earthsky says.