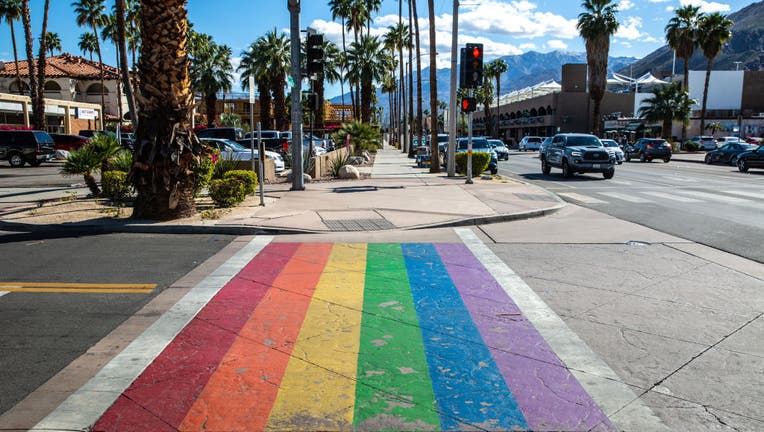 The street pedestrian crossing is painted in rainbow colors as viewed on March 7, 2022 in Palm Springs, California. Palm Springs is a city of nearly 50,000 that has become an important tourist destination for the LGBTQ community as well as a relaxed

PALM SPRINGS, Calif. - A California city is planning to give universal basic income (UBI) to transgender and nonbinary residents regardless of their earnings level.

Transgender residents in Palm Springs, California are eligible to receive a UBI of up to $900 per month solely for identifying as transgender or nonbinary — no strings attached.

The new pilot program will have $200,000 set aside for allocation after a unanimous vote by the Palm Springs City Council last week.

"We're completely opposed to guaranteed or universal basic income programs, because they ultimately cause inflation and raise the cost of living on everyone — they don't work," DeMaio said in a statement.

"But at least some of them have minimum income requirements to qualify, whereas this one is no-strings-attached 'woke' virtue signaling to the LGBT community in a way that is not only offensive but discriminatory," he continued.

A six-month design period will be the precursor of the program’s implementation, in which the group Mayors for a Guaranteed Income will be involved providing guidance.

DAP Health CEO David Brinkman claimed to reporters that the transgendered population is "one of the most marginalized populations in our city who face some of the highest levels of housing insecurity, joblessness and discrimination."

Queer Works CEO Jacob Rostowsky also claimed in a press release that transgender and nonbinary people "are highly marginalized in our society in general, especially economically," and told the Desert Sun that the city of Palm Springs would have to match any state funds.

"Our project's budget is estimated at about $1.8 million," Rostowsky said. "And so when we look at what other [programs] that have been successfully funded have done, their local cities have provided nearly a match to that funding."

Palm Springs Mayor Lisa Middleton, who is transgender, pointed to the transcript from the city council's March 24 meeting where she "expressed strong reservations in general to guaranteed income programs."

"I specifically stated that I did not believe such programs could scale up to adequately respond to the over 37 million Americans living below the poverty line, the over 6 million Californians or the over 400,000 in the County of Riverside living below the poverty [line]," Middleton said in an email, praising Brinkman for his work and expressing her "concern for the financial vulnerability of the transgender community."

Middleton added she believes a UBI program is a "county, state and federal responsibility," not a "municipal" one.

Other members of the Palm Springs city council did not immediately respond to Fox News Digital’s request for comment.

Get updates to this story from FOX News.