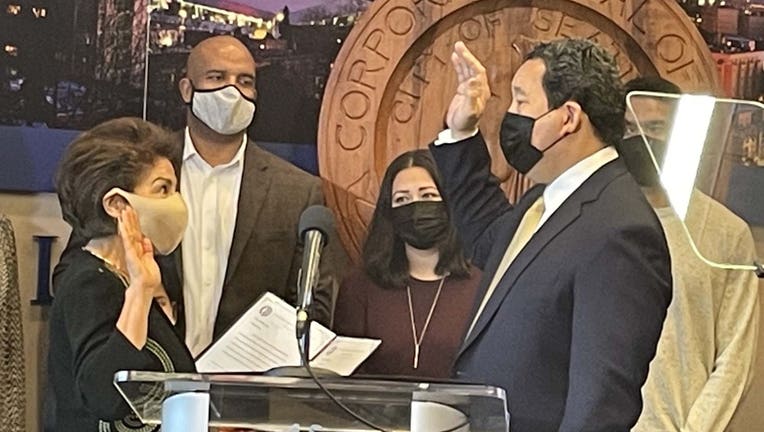 SEATTLE - Seattle Mayor Bruce Harrell celebrated his inauguration Tuesday, promising to create "one Seattle" through a series of policy goals that prioritize public safety and housing.

Harrell — a former Seattle City Council president who officially became mayor Saturday after he was elected with strong support from the business community in November — said his team will lead the city out of uncertain times.

"Starting today, we will lead this city obsessed with excellence and kindness, with inclusion and hope, with balance and optimism. We will reject these attitudes of fear, pessimism, or cynicism," Harrell said.

Harrell, 63, grew up in a redlined Seattle neighborhood, and is the city’s first Asian American and second Black mayor. He had campaigned on adding police rather than cutting funding, as his opponent, former Council President Lorena González, had advocated after the murder of George Floyd by a Minneapolis police officer.

Harrell emphasized public safety in his Tuesday speech, noting "in one Seattle we all feel safe and supported."

"That’s why I will be working with safety leaders and justice leaders and law enforcement professionals committed to culture change and gun violence prevention; leaders who can reshape and redefine policing," Harrell said, adding the importance of hiring the "right kinds" of police officers.

Harrell said his other top priority is addressing homelessness.

"We will be intolerant, not of the people who are unhoused, but of the conditions that caused them to be unhoused," Harrell said, later saying he had discussed resources to address affordable housing and homelessness with Gov. Jay Inslee and King County Executive Dow Constantine.

While Harrell has not shared a specific homelessness plan, when asked after the speech he said he’d address the issue quickly.

"I will guarantee you that you will see people housed here very shortly," Harrell said.

He also noted that Deputy Mayor of Housing and Homelessness Tiffany Washington, who served as a deputy mayor under then-Mayor Jenny Durkan, would be "measured" on the trajectory of homelessness.

"She shares the same passion and commitment, so we’ve talked about real progress in a short time and we’re meeting feverishly on that," Harrell said.

Harrell also mentioned ensuring health care for all, including mental health, and addressing other inequities as a core tenant of his administration.

"We will come through this pandemic and take its lessons to help us improve health care, to improve our education outcomes and to address disparities on a whole new level," Harrell said.

First-term Mayor Durkan, who was also backed by the business community, did not seek reelection. The last three mayors elected by Seattle voters have not served more than one term.