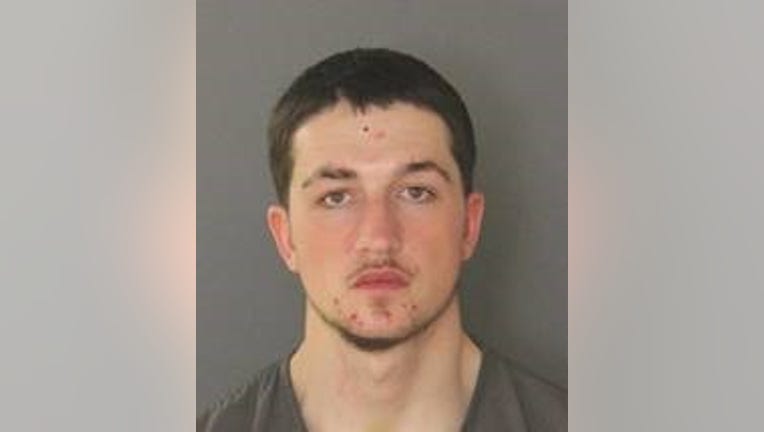 BONNEY LAKE, Wash. - Update: Feb. 10: Bonney Lake Police arrested 25-year-old Austin Smith on Thursday morning after getting an anonymous tip from a FOX 13 viewer that he was at a casino in Fife.

Smith was unable to be booked into Pierce County Jail due to COVID booking restrictions regarding property crime and an injury that he had in his shoulder.

Detectives say he confessed to most of the crimes he was accused of except for stealing a gun. The gun has not been recovered.

Bonney Lake Police are asking for the public's help in locating a suspect wanted in a string of crimes.

On Jan. 11, an employee arrived to work at a Home Depot when that employee saw two people he thought were acting suspicious, so he took a photograph of their vehicle. One suspect wearing a tan jacket with his mask down below his nose confronted him about the photo.

The suspect in the tan jacket was identified as 25-year-old Austin Lane Smith, also known as ‘Zachary Portman.’ The second suspect has not been identified.

Detectives say both Portman and the other suspect later stole over $1,000 worth of merchandise from the Home Depot and fled in a white Chrysler 300, with a California license #8NOY897.

Surveillance video showed the Chrysler return to the Home Depot parking lot where Smith broke a window to get into the employee's truck, where he stole a 9MM Smith & Wesson Firearm.

Detectives ran the license plate and learned the vehicle was fraudulently rented at the Avis Rent-A-Car at Sea-Tac Airport on Dec. 5 and is over a month overdue on being returned.

The same vehicle was involved in two thefts and a pursuit in Redmond in December.

On Feb. 7, the stolen vehicle was found in Federal Way, abandoned in an apartment complex. The car was gutted and had its interior, all four tires and license plate stolen.

While detectives are still working to identify the second suspect, they're asking the public to give them a call if they know where Smith is.

Smith is 6'02" and weighs 180 pounds. He has hazel eyes and brown hair and a tattoo of "Seattle I-5" on his hand. He has several convictions, including three felonies.

You can call the Bonney Lake Police Department Tip Line 253-447-3231 or email detective@cobl.us.