"Jill and I share in the nation’s grief and outrage at the horrific killings of eight people, among them six Asian American women, in Georgia on March 16th," Biden wrote in a statement. 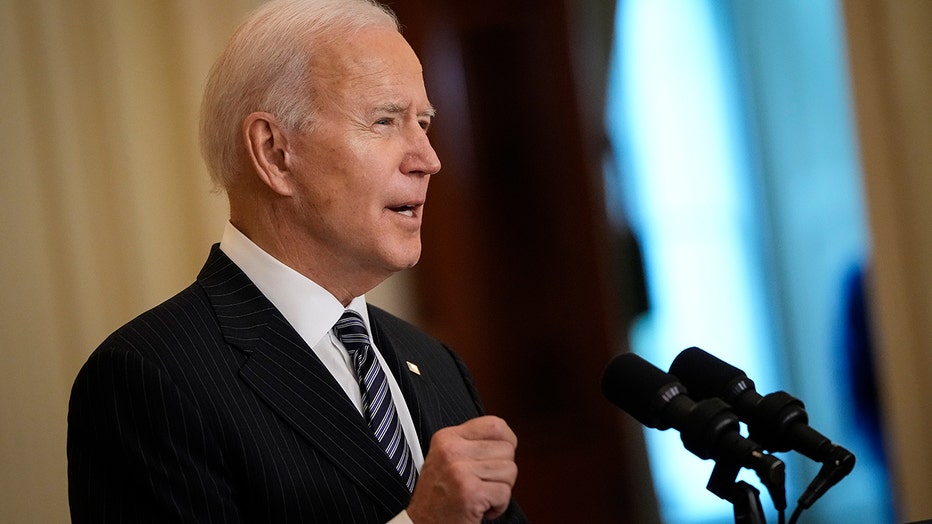 President Joe Biden speaks in the East Room of the White House on March 18, 2021 in Washington, DC

"I urge Congress to swiftly pass the COVID-19 Hate Crimes Act, which would expedite the federal government’s response to the rise of hate crimes exacerbated during the pandemic, support state and local governments to improve hate crimes reporting, and ensure that hate crimes information is more accessible to Asian American communities," Biden continued.

Biden thanked Sen. Mazie Hirono, Rep. Grace Meng and Congressional Asian Pacific American Caucus Chairwoman Rep. Judy Chu for their leadership on the issue and for "their persistence in standing up for America’s values by standing strongly against anti-Asian xenophobia and hate."

During Biden’s first week in office, he signed a presidential memorandum to condemn and combat racism, xenophobia and intolerance against Asian Americans and Pacific Islanders in the U.S.

"Now it’s time for Congress to codify and expand upon these actions — because every person in our nation deserves to live their lives with safety, dignity, and respect," Biden wrote.

The announcement comes after Biden and Vice President Kamala Harris, the first person of South Asian descent to hold national office, visited Atlanta Friday just days after a white gunman killed eight people at three metro-area massage businesses. Six of the eight victims of Tuesday’s attacks were of Asian descent, including two of the four victims who were killed in Cherokee County.

The killings come after a spike of anti-Asian violence nationally.

In Biden’s first primetime address to the nation as president — five days prior to the Atlanta killings — Biden called attacks on Asian Americans "un-American."

Biden and Harris will meet Friday with Asian American state legislators and other community leaders before Biden delivers remarks.

The Atlanta shootings also follow additional high-profile instances of race and gender-based killings in recent years by White men. In 2018, a Florida gunman with what police called a "hatred towards women" killed two and injured five at a yoga studio. The year after that, a shooter targeting Latinos opened fire at an El Paso, Texas, Walmart, killing 22 people.