So far, the worst air quality rates have registered as moderate – experts have advised that holding off on outdoor burning could help prevent the air quality from getting worse.

SEATTLE - Days into an air stagnation advisory, special attention is being paid to the Duwamish Valley – an area known to have air quality concerns.

So far, the worst air quality rates have registered as moderate. Experts have advised that holding off on outdoor burning could help prevent the air quality from getting worse.

The threat, as explained by scientists with the Puget Sound Clean Air Agency, is that without typical air patterns, fine particles that can cause short-term health effects such as eye, nose, throat, lung irritation and shortness of breath can build up in the air causing adverse health effects.

Troy Abel, an environmental policy professor at WWU’s Huxley College of Environment, said he’s paying extra attention to how air quality changes in the Duwamish Valley. The area is known to face major hurdles due to a number of pollution sources – right now, Abel is watching as the Duwamish Valley is seeing worse air quality than typical hot spots.

Usually, air stagnation advisories are a concern in communities with a large number of wood-burning stoves, and outdoor burning activities.

The air around the South Park and Georgetown neighborhoods have worse air quality for different types of factors: industry, diesel emissions from trucks, the port and a local rail yard. Shortly after the pandemic began, things were exasperated by traffic that was routed through communities since the West Seattle Bridge was taken out of use.

"The longer we don’t take action to improve it, it turns into environmental racism because these are pre-dominantly non-white communities," explained Abel. 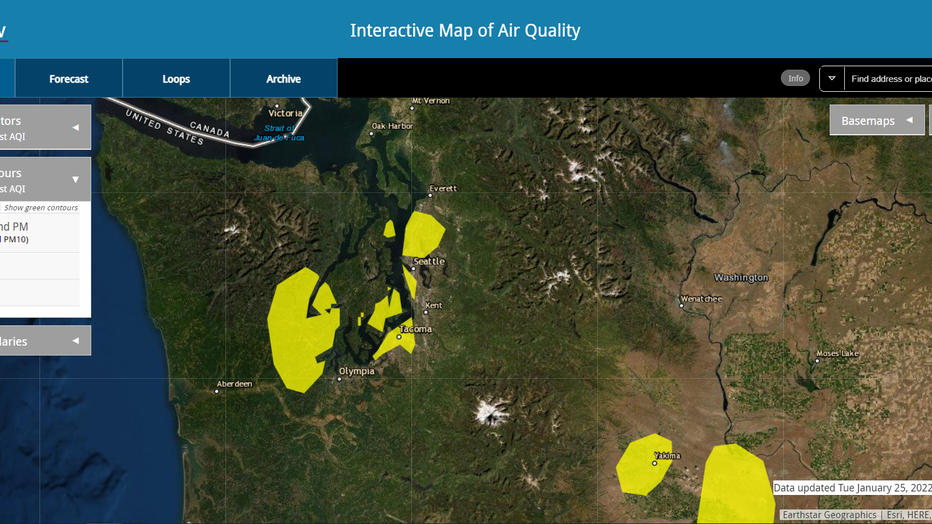 As Abel explains, on a daily basis, air quality is a concern. This week could be especially harmful.

"We often times really focus on wood smoke because regionally, it’s our broadest problem, but when you get into a microscale, that changes," said Abel. "My biggest concern would be childhood asthma hospitalization problems."

That’s why groups like the Duwamish River Cleanup Coalition have been fighting for extra air quality monitoring in the area. There’s a concern that a clear picture isn’t being given of what’s in that area. Childhood asthma is considered common among volunteers with their youth corps group – many attribute that to the air they breathe, which is why added attention has been given to the issue in recent years.

The Puget Sound Clean Air Agency told FOX 13 this week that they’re working on plans to launch extra monitoring later this year – the community is expected to have input on the specific locations those monitoring sites would go.

"We’re trying to find a little bit more specific, a little bit more high-resolution information in our neighborhoods," said Phil Swartzendruber, an air specialist. "We’re working on placing a few more monitors there, we’re hoping to have those placed by Spring to understand the risks and exposure down there."

RELATED: Fog and stagnant air quality continue to drive the forecast through mid-week

Until then, there will be questions about what locals are breathing in. A recent investigative mapping project by ProPublica identified parts of the Duwamish Valley as being a hot-spot for toxins that cause cancer at a rate 3.4 times what’s considered acceptable by EPA standards. You can read more about the concerns raised in that report, here.

So while the air stagnation concerns may lift, some Seattle residents will still wonder what they’re breathing.

As for the rest of the region, the concern remains short-lived.

According to the Puget Sound Clean Air Agency, the extended period of concern should end soon. The best thing people can do is hold off on outdoor burning because the particles created by that will hang in the air longer than usual – people with health concerns should also pay attention to the air quality ratings.

You can find a community-by-community breakdown on the AirNow.gov website.