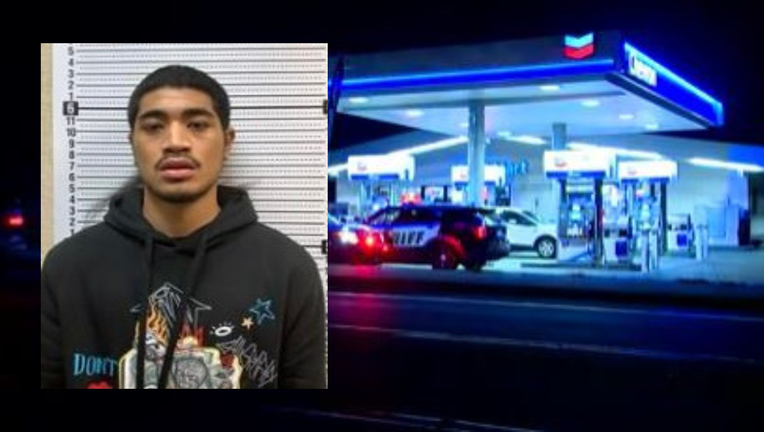 BURIEN, Wash. - Two people, including a teen, have been charged in connection to a string of armed robberies that occurred throughout King County within the span of two weeks in November.

According to court documents, 21-year-old Duke Vivao and a 15-year-old suspect hit a variety of gas stations, stores and restaurants between Nov. 2 and Nov. 18 in places like Seattle, Burien, SeaTac, Renton, Kent, Tukwila and Auburn.

The 15-year-old was only charged with two counts of first-degree robbery, first-degree attempted robbery and second-degree unlawful possession of a firearm.

However, court documents said the teen would eventually be charged with "numerous additional counts of robbery for all the other robberies that he had committed over the past two weeks."

It appears that there were at least four suspects involved in this string of armed robberies, according to court documents.

Court documents indicate that Vivao and the 15-year-old boy were allegedly responsible for most of the robberies. At least two other women and possibly another person were also seen on surveillance footage from various locations that were robbed.

It's unclear if the two women have been arrested or charged in connection to some of the robberies.

Court documents allege the pair were involved in the following robberies, be it together or separately:

The pair had also stolen at least two vehicles and shot at a man who tried to stop them from escaping after allegedly robbing the Covington 76 gas station by blocking their stolen vehicle with his own, according to court documents. The man was not injured in the shooting and was able to ram his car into the getaway vehicle, which disabled it. Three suspects ditched the vehicle and ran off.

Surveillance footage, cell phone records and social media locations were able to place Vivao and the teen at nearly all of the locations that were robbed, according to court documents. Detectives reviewed surveillance footage of days with multiple robberies and saw the two suspects were wearing the same clothing in all, linking them to each robbery, court documents say.

The gun seen on surveillance video being used in the robberies allegedly matches the handgun that the 15-year-old has, according to court documents.

According to court documents, Vivao allegedly committed these armed robberies while on release for DOC supervision for an assault conviction involving an attack on two strangers. He was granted a ‘First Time Offender Waiver’ in King County Superior Court in November 2019, according to the King County Prosecuting Attorney's Office.

"The defendant [Vivao] has admittedly engaged in a spree of violent offenses, without regard for that fact that he was not complying with court orders and DOC supervision the entire time."

He told detectives upon his arrest that "he was ‘on the run’ from DOC and that he had no money and needed some money, so he started doing robberies," according to court documents.

"The defendant has proven that he is unwilling to abide by court orders, will not abide by conditions of release, is a flight risk and an absolute danger to the community if released," court documents said of Vivao.

Vivao’s next court appearance is his arraignment at 8:30 a.m. Dec. 29. The 15-year-old’s next court date is a case setting hearing scheduled for 1:30 p.m. Jan. 4 at the Child and Family Justice Center.